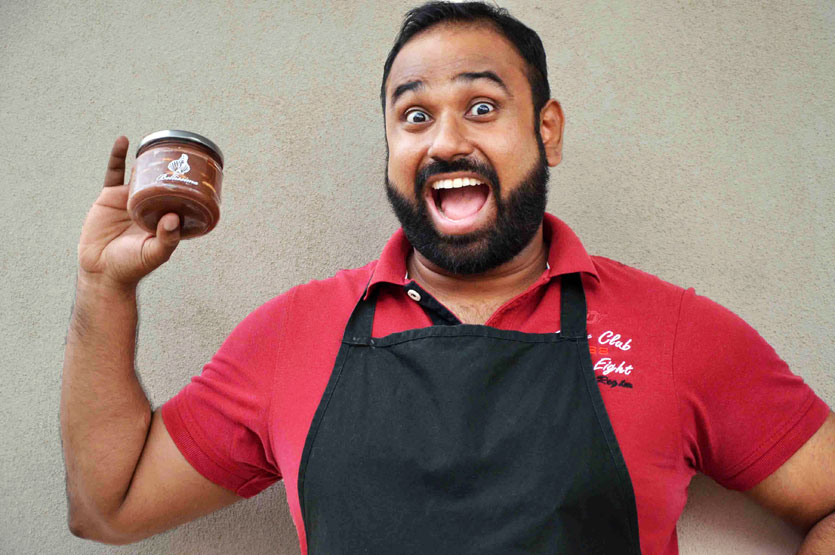 What started as an attempt to recreate the chilli paste he was once denied eventually led Dush Ratnayake on a journey which resulted in him starting up Bellissima Desserts with his friend and partner in crime in the kitchen, Andrew Obeysekere. "Along the way I have picked up a bachelor's degree in Finance and a minor in Botany, started and operated a few restaurants, hosted a restaurant review show for MTV, written a food column for Living Magazine, and consulted for different F&B businesses", Dush says. "So it is fair to say that apart from the blip that was my degree, my entire life has revolved around food." Elaborating on Belissima he adds, "The brand 'Bellissima' has been around for more than 3 years, but it was only in the past 8 months that we focused on it as a business and really worked hard to get its name out there. We currently supply our products to Black Cat Café, Life Food, Rocco's, La Langousterie, and Collectique."

Swedish Chef from the Muppets.

How do you pick? There have been so many gems, but I do love a challenge, so this is not necessarily a bad thing.

A particularly tough request was when a pregnant lady took one look at my then cafe menu (that had waffles and burgers) and said, "I want Thai food". Still, not sure how I made that one work, but I did.

If you were holding a gun to my head I would say one of the MasterChef competitions.
At the risk of sounding like I've contradicted my claim of loving challenges; competitions freak me out. There's a good chance I would lose the plot with that kind of pressure. Much respect to those who take part in shows such as MasterChef / Iron Chef / Hell's Kitchen etc.

You've been given the opportunity to bake something for your favourite celeb. Who would you pick and what would you make?

I would have picked Ellen, but she's a vegan and I would have no idea what to make for her. So I would pick Robin Williams, but then he's dead. If he wasn't dead, I would make him a simple dark chocolate cake. (Can't go wrong with this choice and because I was asked to bake. If not I would have made him a yellow rice spread).

Hmm... and I also came to the conclusion just now that it's easier to cook for a dead guy than a vegan.

This is a really tough question. People have become very bold in their use of ingredients and most seemingly oddball flavours and combinations may already exist. I just had karapincha ice cream today for example.

One idea I have been playing around with is a purple yam pie (similar concept to a pumpkin pie) I'm a huge fan of purple coloured recipes as they're a bit hard to come by and can look (and also taste) amazing.

We used to have one big wicker chair in front of the TV when I was growing up and everyone would fight for this seat. One day I got up to change the channel and my father wandered into the room, thought he'd be sneaky and sat in it. Brilliant idea, except that he sat on my plate of dhal and bread.

Too many to even recall. Any Looney Toons script or plot line you can imagine has probably already happened.

Believe it or not, eggs. They are absolutely versatile but you must treat them with respect. You can easily throw off the texture of most egg-incorporated dishes if you are distracted in the kitchen.

For orders, you can get in touch with Dush via Bellissima on Facebook.