Having grown up in an environmentally-friendly setting since her childhood, Prof. Enoka Kudavidanage was always familiar with nature. With a BSc in Zoology and MSc in Environmental Sciences from the University of Colombo, Prof. Kudavidanage earned her Ph.D. in Conservation Biology at the National University of Singapore. Her Ph.D. focused on the impact of land-use change on biodiversity and ecosystem functioning. Through this research, she revised and validated the dung beetle fauna of Sri Lanka as a suitable indicator taxon to monitor land-use change in Sri Lanka. She also founded the Tropical Ecosystem Research Network which is an independent platform to conduct research activities. 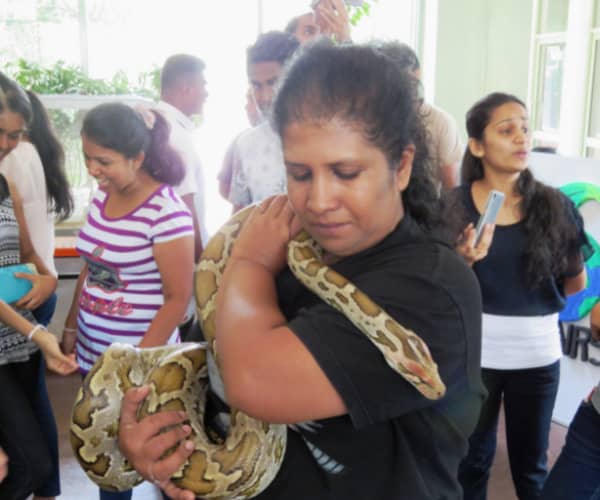 Speaking to Women at Work, Prof. Kudavidanage shared insights about her research work, impacts of diminishing forest cover in Sri Lanka, disparities between sustainability and development, and why conservation is not just one person’s job.
Excerpts :

Q    What inspired you to take up a career in conservation?
More than conservation, I grew up in a family that stayed close to nature. I grew up seeing my mother and grandmother saving animals that came into the garden. I have seen how they saved snakes, ants, and other animals. Therefore it was quite an environmentally friendly setting. That was the first thing that inspired me. The second was reading. Ever since the age of two or three my grandmother would read to me during meals. These were always environment-related. Reading introduced me to wildlife-related topics. Back then I lived in Piliyandala and there was a small forest patch adjacent to my house. There were monkeys, porcupines, and other animals in the neighbourhood. These inspired me to be involved in conservation and that was my focus after A/Ls.

Q    Let’s talk about your research on the dung beetle.
When I was doing my BSc in Zoology at the University of Colombo I had the habit of following people in the field. I spoke to a lot of people and did a lot of networking. Thereafter I did a short stint at Lake House as a journalist and I spoke to many environmentalists. I once went to Udawalawa with Dr. Nandana Atapattu and these interactions inspired me to be an academic. Soon after the degree, I got a placement to work in Buttala and these areas were affected by the human-elephant conflict. Therefore I was interested in doing a Ph.D. on elephants. I got selected to the National University of Singapore which is one of the top 20 universities in the world. I was recommended by both Dr. Rohan Pethiyagoda and Prof. Sarath Kotagama. But my superiors suggested that I do research on the dung beetle instead and that it’s a global challenge. The dung beetle is one of the top biological indicators of land use patterns. I argued about this for about a year. But eventually, I started my research and worked with a Chinese and Singaporean girl in the field. I had my coursework and exams in Singapore and the fieldwork in Sri Lanka. There wasn’t much research done on the dung beetle.

Thereafter I worked at the Sinharaja and Kanneliya Forests. My mother, students from Peradeniya and Sabaragamuwa Universities were present during fieldwork. This is where I met my husband as well. He initially came as a volunteer and now he too is involved in conservation. The dung beetle was identified as a surrogate taxon and a good indicator of changing habitats. We used dung beetles to show how habitats changed and in turn how it affected other species. The samples too were straightforward. A few students are now developing a tool to assess habitat quality and how fertilisers and other treatments affect habitats in tea plantations.

Q    You then set up the Tropical Ecosystem Research Network. What are the activities done here?
My husband and I thought that we need to have an independent platform to carry out research activities. My mother was a big inspiration for me but after her passing, we initiated this in 2012. We collaborated with Ireland, NUS, and even with a knowledge management team from UNDP. It was also a platform to facilitate research work for students. We also started gathering information about leopards and did studies at Horton Plains, Lunugamvehera, Udawalawa, and other places.

Q    Sri Lanka has a diminishing forest cover. What are the consequences that we will experience as a result of such anthropogenic activities?
One thing that people don’t understand is that Sri Lanka is a biodiversity hotspot. But today it is under severe threat. We have a fantastic system to integrate nature with all other sectors. But people don’t give attention to the resource base. If we don’t protect our resources, people will suffer from environmental pollution and other health hazards. For example, people are deforesting catchment areas in Belihul Oya. As a result, there’s a scarcity of water. We will have to face drastic conditions due to the lack of water. There will be water pollution. We have scattered development. Due to the Moragahakanda project, the elephant gathering in Minneriya is affected. There are lapses in land use planning as well.

Q    Are you satisfied with the involvement of youth in conversation activities?
There’s a lot of development on the part of the youth. People are becoming more aware of environmental conservation. But with technological advancements, the youth seems to be disconnecting from nature as well. As an academic during our younger days, many of the youth were interested in doing hard work. But nowadays people are not doing in-depth ecological studies. There’s a lapse in in-depth conservation and ecological sciences.

Q    Even though many talk about sustainable development there’s a disparity between sustainability and development. What are your thoughts?
We sometimes need to question whether certain developmental activities are actually needed. Some only look for certain financial gains. Many don’t consider the location when they propose these projects. When choosing a location they should look at how they could coexist with wildlife and nature. On the other hand, environmental safeguarding doesn’t happen in a practical manner. There’s no advocacy, permits or even evaluations of certain projects. Awareness is another concern. Everybody from the grassroots level up to the government needs to be educated on the importance of the environment.

Q    Despite many laws to protect the environment, people don’t seem to be taking the law seriously. Why is it so?
People don’t take the law seriously because they have lost trust in it. There’s a lack of implementation. If someone is caught poaching, he will be fined a lesser amount or will be granted bail due to lack of evidence. Therefore he may commit the same crime again. Then there are political interferences. People challenge the authority, and forest officers are being transferred. Even though we have a fantastic framework, there’s a lack of enactment due to these challenges. That makes it easier for perpetrators to get away.

Q    What challenges have you faced along your journey?
I grew up as an only child. My parents would accompany me to the university. My mother studied nature, she climbed mountains, worked with wildlife, and kept me company. That role was later taken over by my husband. This is the culture of this country. They don’t like the idea of a girl going into a forest due to safety reasons mainly. There were instances when I had to stay overnight with groups of male colleagues. But they have always been very supportive. However, deep down you worry about what people say. One of my biggest inspirations was Prof. Savitri Gunatilleke who is one of the leading female scientists in the country. She conducted research on pollinators in the Sinharaja Forest. She would go deep into the jungle, use a ladder, climb trees and conduct her research. This guidance helped me to overcome my obstacles.

Q    The most satisfying part…
To be in the forest. Reading and working in sync with nature are the essentials of my profession. Being with young people also inspires me. I love the affection I receive from them.

Q    Future aspirations and message to the citizenry?
We have a few projects which are ongoing and a few in the pipeline, which will be conducted by TERN. The Leopard Project is one of them and we have partnered with the Wildlife and Nature Protection Society (WNPS) to gather information on leopard behaviour and habitats. We are also doing an invasive species removal project with the Federation of Environmental Organisations (FEO). A dung beetle project to evaluate habitat change in the tea sector is also underway. Apart from that, I’m writing a book as well. What I have to say to the people is that conservation is not one person’s job. It’s everybody’s responsibility. If you put a toffee wrapper in your pocket then you’re doing your part in terms of conservation. Hence, the smallest acts of change make a big difference.