Last November, Pilot Officers Pavithra Gunarathne and Rangana Weerawardana attached to the Sri Lanka Air Force (SLAF) made history as the first Lady Officers to be awarded the prestigious Flying Brevet thereby becoming the pioneering female military aviators of Sri Lanka. With that, they also proved that women could still achieve their dreams even in a largely male-dominated environment. This month Women at Work speaks to two vibrant ladies who were determined to fulfil their childhood dreams and make their parents proud.

WHAT INSPIRED YOU TO JOIN SRI LANKA AIR FORCE?
Pavithra : It was a childhood dream to join one of the tri-forces. After I finished my A/Ls I got to know that the SLAF is recruiting lady pilots and I joined in 2017.
Rangana : My parents worked at SLAF and I also had a dream to join the Air Force. After I completed A/Ls I got to know that they were recruiting officers for some branches. My brother said that I could face the interview and see. Subsequently, I applied and got through.

WERE THERE ANY OBJECTIONS FROM YOUR FAMILY WHEN YOU TOLD THEM ABOUT YOUR DECISION TO JOIN ONE OF THE TRI-FORCES?
Pavithra : Initially my mother didn’t like the idea. But because it was the first time they had recruited lady pilots and since there were only a few of them, it was a good chance to make history. So, later on, they supported me.
Rangana : They were alright because they knew about the situation. 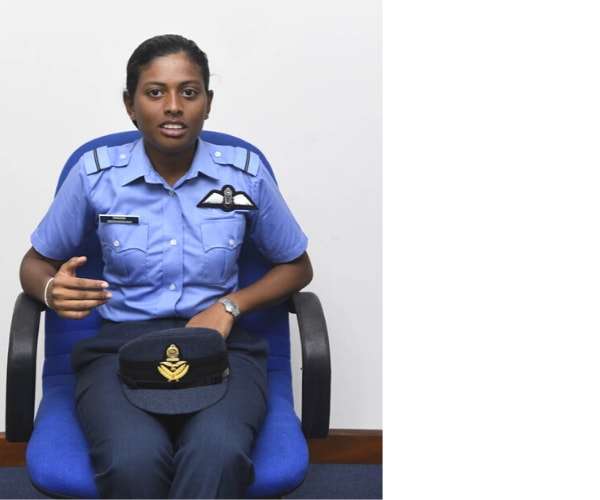 HOW DO YOU FEEL ABOUT BECOMING THE FIRST TWO FEMALE PILOTS COMMISSIONED
BY SLAF?
Pavithra : I am very happy and proud of myself. I came this far because of my family and members at SLAF. I’m proud of who I am today.
Rangana : I too felt proud of myself. It was a memorable moment because I made my parents proud.

TELL US ABOUT YOUR ROLES AND RESPONSIBILITIES AS A PILOT.
Both : We are in the No. 8 Light Transport squadron. It currently operates the Harbin Y-12 from SLAF Base in Ratmalana. We schedule transportation for VIPs, VVIPs and arrange reconnaissance missions as well. We operate scheduled flights from Ratmalana to Jaffna and Trincomalee. We handle transport as well as cargo. But due to COVID several flights got cancelled and even after we finished training we had to continue training.

HOW CHALLENGING IS IT FOR A FEMALE TO BECOME A PILOT IN A MALE-DOMINATED MILITARY ENVIRONMENT?
Pavithra : Sometimes there were challenges. Training is the same for both genders but after three months we got used to it. We were taught to adapt to any situation and to have the confidence to handle any situation.
Rangana : Since we were the first female pilots it was a bit challenging. Piloting is a difficult job because we have to be concerned about the passengers and cargo. But we were guided by qualified instructors such as Group Captain Amal Perera and Poojana Gunathilaka. Our batchmates too were friendly and very helpful. 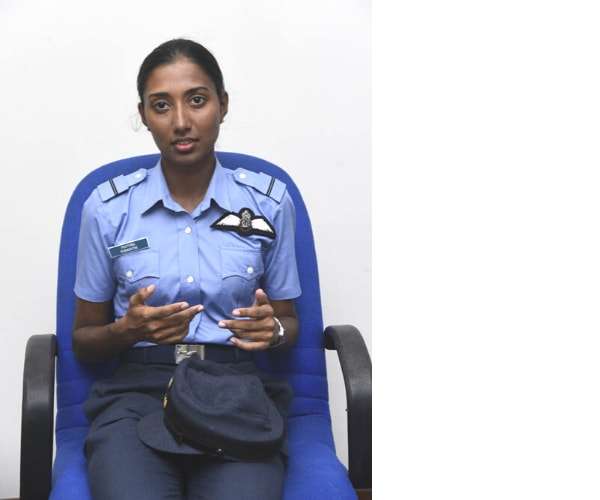 THE NORMAL PERCEPTION IS THAT THE MILITARY IS MORE SUITABLE FOR MALES. HOW HAS SLAF ENSURED AND EMPOWERED GENDER EQUALITY WITHIN ITS SYSTEM?
Pavithra : With the establishment of the Women’s Wing they look into the welfare of female officers. They support us if we face any issues and are very supportive.
Rangana : I was awarded the prestigious ‘Sword of Honour’ which is usually awarded to the Officer Cadet who has achieved the highest results in both academic and professional studies and who has shown the best all-round performance throughout the course. There were four female officers who were nominated for it. Apart from that I also got the chance to command the commissioning parade, making history as the first female officer to command a parade alone. So all this is proof of the gender equality within the SLAF.

YOUR MESSAGE TO WOMEN WHO ARE ASPIRING TO MAKE A CHANGE?
Pavithra : Sri Lanka is bound in its culture and therefore people still have the view that women belong in the kitchen. But in many instances, this has been proven wrong. If you’re willing to work hard, one day you will be able to achieve your goals.
Rangana : When I was commanding the parade my parents were in tears. So no matter who you are, you should always be able to make your parents proud.