When a Sri Lankan Girl Falls in Love

In a hypothetic world, when a girl falls for a guy, she either finds that the affection is reciprocated or if not, moves on – in either situation, she walks away unscathed. However, in the case of a Sri Lankan girl, this is not so. If truth be told, I haven't ventured down this road in a while, but I do recall ‘strange' behaviour that came over me with a beating heart while mini-dragons ravaged my gut when he spoke to me. Sri Lankan girls go through a strange cycle concerning her behaviour and speech in the days of realising her affections. Amazingly enough, everyone except the guy she likes realises this. 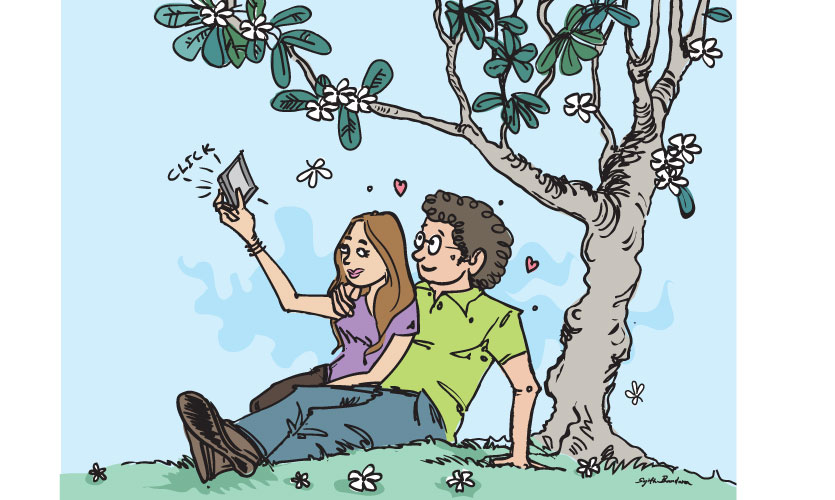 Let's take a look at some this behaviour – maybe you're nodding your head in agreement or I've missed out on a few, let me know in comments on your thoughts.

1.) Awkward Smiling: You could be getting the shelling of your life from your boss at work, or facing the worst possible CIMA examination where you haven't flipped a page, but you find yourself happy. Grinning and giggling, because you imagine scenarios of him talking to you, showering you with a thousand lilies, or taking a candid selfie under an Araliya tree. Your friends now imagine that you have overdosed on your gastritis medicine and are now experiencing hallucinations.

2.) Attire Overkill: I know immediately when office romance spurs no sooner I see Dona Dowdy dressing up to the nines. She, the girl who typically wears clogs from the ‘90s, doesn't bother with the eye crust, and blackened nails is now sporting block-heeled shoes, and matte lipstick even though it's smeared over her caterpillar upper lip looking like peeling paint; if that doesn't tell you that something's up, your radar is probably off.

3.) Social Media Whirlpool: Just like the wardrobe, her social media feed also suffers. The pent-up emotions cause her to dispense her feelings by spending 16 hours a day just posting songs expressing love, falling in love, and being lovelorn. She will also post sayings of love, or even post results of online quizzes like ‘What Type of Girlfriend You Will Be’ or ‘How Romantic Are You'. These are all (failed) attempts to get attention from her not-yet-beau, who now is assuredly just bored.

4.) Analysing his Social Media Presence: What does he post? What does he ‘like'? Whom do they follow? Are there any exotic actresses on list? His exes? So many questions, so little time. This is also the reason why girls end up with puffy eyes in the morning after hours of preening into a mobile screen until 4 am just to stalk him. At this point, you now know what his mother's sister's cat did in 2007 and that the time he stubbed his toe when his cousin from Dubai visited in 2011.

5.) The Not So Good Advice: Some girls have friends who caution them on the dangers of being too wanton. They would say, ‘Aiyo, here, now please ignore him, of course, don’t look at him even - okay? Don't be cheap' - even though it's posed as a question, it's actually a mild threat. So, if and when this guy does want to strike up a conversation the Sri Lankan-haughtiness kicks in and he is left dumbfounded. #SoNotHaut

6.) A Different Bawl Game: Now that he had tried and failed, your crush moves on. He doesn't try to talk or smile, he thinks you're the crazy person who hears voices in her head. You end up sobbing into your pillow for 43 days and now take on a new side and post of the cruelties of love, how men are secretly evil, and how every guy is out to mess with you.

However, in a few weeks, you forget him and move on with the great help of your two companions: red velvet cake and Imorich chocolate chip ice cream. I'm sure many girls go through similar cycles and it's funny how when you like someone of the opposite sex, everyone knows about it expect the guy – I'm sure it's a Sri Lankan thing because we do it so well! If you've trapped him with your 64-Mb chip, you're a lucky one; for others, deviate from status quo.

I’ve reached the end of my rendition of ‘When a Sri Lankan Girl Falls in Love’; What do you do differently? Can you relate to anything? Show me some love by hitting that ‘share' button and don't forget to check Ms Confidential on Facebook, Google+ or Twitter.