We all loved the cartoon Scooby Doo and what we'd love more would be a golden retriever named after it! A fussy eater yet someone who LOVES his cheese, where it's an absolute must to get him cheese pizza whenever the family orders in! A dog who adores water and the beach and completely understands you (and your moods), a man's best friend definitely applies here!

Scooby is derived from the cartoon Scooby Doo. My family has 2 girls and 2 boys and this is the same as the characters in Scooby Doo - Daphne, Velma, Shaggy and Fred. Scooby is one thing that brings us al together and thus we thought Scooby was apt! The whole house calls Scooby's treats as Scooby Snacks.

Scooby is the fussiest eater ever. My mom jokes it was easier to look after triplets than it is Scooby. The helper at our house takes care of his meals. He has a bowl of milk every morning with a slice of cheese. He loves his cheese. For lunch, he usually has rice with mutton or chicken but the odd thing is the rice has to be made into balls and fed to him one by one. It's a laborious process. One of my siblings usually sneaks cheese and treats for him before dinner and hence he never really finishes his dinner until 11pm. Scooby loves the fish patties at Perera and Sons and the Cheese Lovers Pizza at Pizza Hut. We always order a seperate one for him when we have pizza.

As a golden retriever, Scooby absolutely loves the water. He loves bath time and sometimes opens the garden tap with his mouth and sits under the open tap! Bath times are never a trouble, if anything he never wants it to end. Towelling him dry is a nightmare though!

Does it do anything out of the ordinary which fascinates you?

Scooby has an amazing ability to sense emotions. Whenever we are having a serious discussion he will just sit and listen with his head cocked to a side or if I am by chance upset or sad he will nudge my until I bring my knees up and then he buries himself under my lower legs. Scooby is a surprisingly intelligent dog.

The beach! Scooby has had multiple trips to the South coast of Sri Lanka. He loves the beach and it's so hard to get him out of the water. It's hilarious to see the faces of surprised Sri Lankans when Scooby swims far into the sea and says hello to them. Scooby loves playing "Fetch" whether it's on land or water. However, the big waves do take him by surprise!

Scooby is a very cheeky dog who gets up to a lot of mischief when no one is looking. Whenever we leave the pool door open in our backyard, Scooby jumps in! He jumps in and floats in the water for ages till someone finds him. It's pretty funny because he can't get out unassisted because the tile in the pool is too slippery but he doesn't seem to mind. He also loves to steal coconuts from the kitchen!

Having a pet was recommended by a mental health professional as I struggled with anxiety in the past. Scooby was a spontaneous decision albeit an amazing one.

On a normal day when I return home, Scooby usually runs up and jumps on me (ruining my outfit) in the process! But, since I live abroad now, whenever I return home after 3 months, Scooby goes nuts. He runs around the house and keeps jumping on me and running around in circles around me. He is the love of my life. He's such a beautiful animal and never fails to make his family feel loved. He will always greet everyone when we return home even if he's eating or sleeping.

Scooby loves to chase birds, so much so we no longer have birds come to our backyard. It's really entertaining to watch. Scooby keeps jumping in the air trying to catch birds who are flying high above him.

It was a typical Sri Lankan storm one night and all the lights went out and it was pitch dark. Scooby is petrified of thunder so he spent the whole night on my lap with me sitting on the floor with him. Also, any trip to the seaside with Scooby is unforgettable.

Can you share a cute story about your him?

When Scooby was a few months old, he used to love water so much, he would sit in his water bowl and then he would try to get out and spill not everywhere and then when he tried to walk away he would slip on the tile and just end up falling asleep in a puddle of water.

Scooby has enriched my life more than any material possession ever could. My siblings and I cannot imagine our house withou Scooby. I would always  recommend to everyone to have a pet. Especially if you have mental health issues, then unconditional love and support of a beautiful creature can do remarkable things for you. 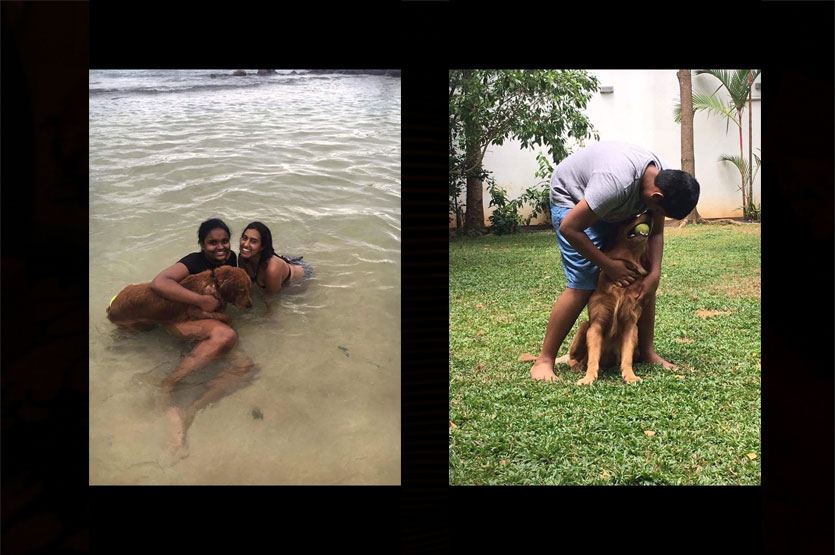 The unconditional love. Scooby's life revolves around his family and he never fails to remind us so. He will never sleep if my mom doesn't pay him on the head and say good night. He waits every night for her to do so. He has brought our whole family closer together.

Everything! Scooby never fails to surprise us with his mischief. Whether it's stealing carrots or coconuts from the kitchen. To jumping into the pool. To ripping up my brothers school notes. To running a mile if he hears a motorcycle rev. Also, it's hilarious to walk Scooby because he is petrified of cats. If he sees a cat, he runs. The neighbours all love him though, they all have treats for Scooby when we walk him.