The late Clarence Wijewardena and veteran singer Annesley Malawana were musicians from Ratnapura who led the renowned band, Moonstones. Annesley joined Clarence when the latter was looking for a partner and lead singer to make his dream a reality. Their journey from the Moonstones to the Super Golden Chimes marked the Golden era in the history of Sri Lankan music back in the seventies. Even though Clarence left his audience early, Malawana continued his legacy, remembering Clarence in every concert that he has performed to date. This December, Malawana will be back on stage with the living members of the Super Golden Chimes, remembering The Moonstones and Clarence in a glorious celebration to usher in the festive cheer. 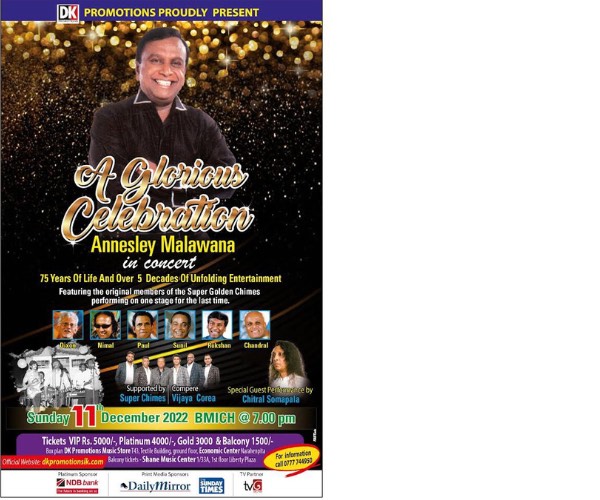 Having worked closely with Malawana for a long time, DK Promotions proprietor Damayantha Kuruppu, had wanted to have this concert back in June to coincide with the former’s 75th birthday. “However, the country’s situation didn’t allow me to do so. Therefore we postponed it to December. Annesley and Clarence are the pioneers of Sinhala pop music and I’m doing this concert as a tribute to both of them,” he said.

Annesley and Clarence were both members of the renowned band Moonstones and Annesley later formed the Super Golden Chimes. As a few of its original members left the band and flew overseas the band was reorganized as Super Chimes. What is special about this concert is that those band members of the Super Golden Chimes who have settled overseas will be back to perform on stage.

The lineup includes some original songs by the Super Chimes followed by the release of Annesley’s latest album, a guest performance by Chitral Somapala and the final segment of the show will take the audience back in time as they perform some of the evergreen hits produced by the Super Golden Chimes and the Moonstones while remembering Clarence Wijewardena.

“I have completed 55 years of music and I wanted to have a show with the original members of the Super Golden Chimes,” said Malawana in an interview with the Daily Mirror Life. “Even though they were in different parts of the world I managed to get them together.  As such, Dixon Gunaratne, Rukshan Perera, Nimal Perera, Sunil Malawana, Chandral Fonseka and Paul Perera will join the show and they are the living members of the band. Of course, Clarence and Srikantha are no more. So when I called them they were happy to join. They will perform perhaps for the last time in Sri Lanka.” Since the show is on a Sunday it has been scheduled for three hours with an amazing lineup as mentioned earlier. It was Malawana who introduced the Stars of 70s concert series and he was able to take the show across borders to Australia, the UK, the USA, Canada and Dubai. He then introduced the Sing-a-long with Annesley series which became popular, especially during the weekends. The show is promoted by DK Promotions while the host, as in every other show is Vijaya Corea.

“For me, this show completes my repertoire of musical shows. I organized a show for Desmond’s 75th birthday. Both Desmond and Sunil are no more. But for me this is a huge achievement as it fills my encyclopedia of bringing all the greatest bands together on stage,” Kuruppu said. 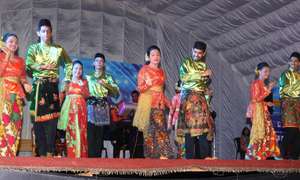