Conservationists urge public to adjust and coexist with Crocodiles

Crocodiles, along with birds are the last remaining survivors of the once-prevalent Archosauria. During the Mesozoic period, this group along with dinosaurs and other reptiles dominated life on all continents and oceans. Most, or all of the crocodilian adaptations had evolved by the late Triassic period. Crocodiles are the most advanced surviving reptiles while many of their features are more similar to mammals or birds than to other reptiles. Therefore, although perceived as a threat to humans, conservationists believe that protecting and coexisting with crocodiles like with any other wild animal would be beneficial in the long run. 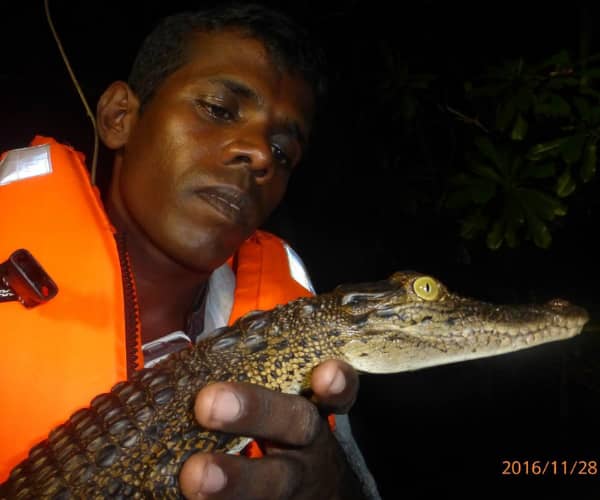 Back in 1930, Dr. P. E. P Deraniyagala claimed that the species Crocodylus porosus (saltwater crocodile) had become rare in Sri Lanka and emphasised the need for a nature reserve and to provide adequate protection for their habitats. In 1955, he described a non-valid subspecies called C.p minikanna which translates to man-eater in Sinhala. But a groundbreaking revelation was made when he discovered a fossilised tooth fragment from a gem pit in Kuruvita. The tooth was discovered at a depth of 12 feet along with hippopotamus and rhinoceros fossils in the vicinity with the same degree of mineralisation. This species was named Crocodylus Sinhaleus. However, even though labeled as extinct, researchers continue to document evidence on this species for conservation purposes.

Today, Sri Lanka is home to two types of crocodiles, namely the saltwater crocodile and mugger crocodile (Crocodylus palustris). “They could be differentiated by looking at certain morphological features including colour variations, as they have a specific colour pattern, the development of scoots, length and even the size of the skull,” said Pradeep Rathnasiri of the Department of Wildlife Conservation with over 21 years of experience in crocodile conservation. “However it is difficult to distinguish between a male and a female crocodile and it can be done only by an expert. Males grow much more in length and size than females.”

Legend has it that Colombo’s Beira Lake was once home to a large population of crocodiles, especially during the Dutch period. The Kayman’s Gate, previously an entrance to the Colombo Fort, now seen as an abandoned bell tower standing at the intersection between Main and 4th Cross Streets derived its name from ‘Kaaiman’ the Dutch term for crocodile.

However, Rathnasiri says that apart from the above species, another 24 species could be found across the globe. “The Crocodilia order is categorised into two subfamilies, namely alligators (Alligatoridae) and crocodiles (Crocodylidae). But the issue here is that sometimes there are conflicts of interest in research studies. Therefore, one species may sometimes overlap another. Saltwater crocodiles have a salt gland in them which they utilise for the intake of salt (sodium chloride) mainly from water.”

Salties, as they are commonly acknowledged, inhabit both freshwater and hypersaline waterways and maintain iconic homeostasis by excreting excess sodium and chloride ions from these salt glands. “They spend a great deal of time basking in the sun and if you closely observe their tongue you could see white-coloured droplets. These are the excess sodium chloride ions that they excrete. Because of this gland, saltwater has no impact on their system. Their scoots are made of keratin.”

Crocodiles are poikilothermic (cold-blooded) and can only regulate their internal body temperature by adjusting to the environment in which they live. “Opening their mouths can cool them off since the large exposed wet surface allows much evaporation. Exposure to sunlight also improves their blood circulation,” opined Rathnasiri.

Although conservationists have continuously advocated on human-wildlife coexistence, this is rarely been practiced. On the contrary, humans pose greater threats to wildlife and in turn, wild animals have adjusted their behaviours for survival. “The human-elephant conflict came about when people started encroaching their habitats and elephants were deprived of their habitats as well as food. Loss of habitats contribute to about 80% of the issue when it comes to the human-crocodile conflict as well. Another problem is the heavy use of fertilisers in agriculture. When chemicals wash down the rivers and streams these harmful substances impact fish populations which are potential prey for crocodiles. With a diminishing supply of food, crocodiles would sometimes opt to prey on humans as there is no other alternative,” explained Rathnasiri.

He further said that the crocodile is an ambush predator and would find potential prey by camouflaging themselves. “It has a relatively smaller brain and when on land it takes time to decide how it would attack a certain kind of prey. Their tendency to prey on land and shallow waters is extremely rare. But in deeper waters, it could swim to any length to get hold of prey.”

Saltwater crocodiles frequent urban waterways and as amphibious animals, they hunt for prey on both land and water. But prevailing town-planning structures do not support their lifestyles. As a result, crocodiles have to swim all the way to the sea in order to move towards land. “Urban town planning concepts should be developed by considering the population of urban wildlife. But this is seldom done as the different stakeholders involved in the process don’t come to a common ground. Haphazard use of land is another threat to crocodiles and as a result, conflicts may aggravate in future,” Rathnasiri added.

“Crocodiles survive by attacking their weaker counterparts. However, people continue sand mining activities along major waterways and this would give a chance for weaker animals to survive by hiding in the pits created by sand mining activities. As a result, the population of weaker crocodiles will also grow and when they come into conflict with the stronger population, humans too will be threatened. Over the past few years, around 2-3 humans died as a result of this conflict. But this number could increase in future.” 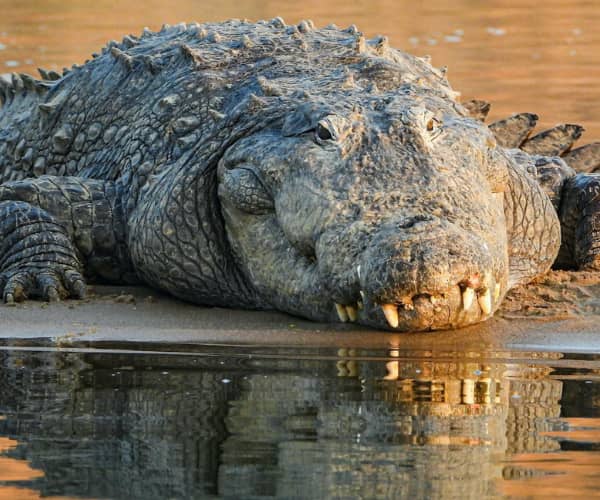 By 1985 the frequency of sand mining activities along the Nilwala River increased manifold. “Prior to 2002, crocodiles were found within 7-8 kilometers upwards from the estuary,” recalled Rathnasiri. “But with increased sand mining activities they have now moved further upwards and could be around 20 km further upstream. Mechanised sand mining activities began from 1995-2000 and during this period a separate population came to life. The pits created from these activities accumulated the food (prey) that washed downstream and crocodiles and other aquatic species were eventually deprived of food. Why the Nilwala River had more incidents of this conflict was because an artificial population was created this way and they got used to the habitat and spread along the River.”

However certain policy decisions were implemented to reduce sand mining activities along the River. “Thereafter the Disaster Management Unit also got involved to mitigate this issue and we provided the technical expertise to set up traditional Crocodile Excluding Enclosures (Kimbul kotuwa) to ensure the protection of people living along the River banks. We identified locations where crocodiles frequent and conducted many awareness programmes for the people.”

The research made it clear that crocodiles would prey on humans living in close proximity to the Riverbank. “People living within five metres of the Riverbank were easy targets. But as people moved further away from the banks, the tendency for an attack was less. Attacks were mainly reported between 5.00am and 10.00am and 3.00pm and 7.00pm. We, therefore, educated people on these factors and discouraged them from using the River for bathing and other purposes. But even though people use the Nilwala River, they are more cautious now.”
However, Rathnasiri warned that this conflict could possibly move towards the Bolgoda Lake but if humans don’t pose a threat to crocodiles, it could be developed as a key feature in tourism. “We could arrange boat safaris and educate tourists on crocodiles,” he added.

When asked if this conflict prevails along other major waterways, Rathnasiri responded in the negative. “Sand mining activities happen more frequently along the Mahaweli River but we seldom hear of such incidents. Another fact is that crocodiles need shade to grow. They can live without water for an entire lifetime but they need food and shade. Crocodiles therefore inhabit mangrove habitats and thrive on crustaceans that frequent these habitats as they need calcium for their growth.”

Translocation : Not the best solution at hand

When a crocodile was spotted near Port City recently, wildlife officials took immediate measures to translocate the animal. A suggested solution to mitigate the conflict is to translocate the animal to the closest possible environment that would protect the animal. But from a personal point of view, Rathnasiri feels that translocation isn’t the best solution. “Back in the day an animal found in the wet zone was translocated to the dry zone but from our experience in the field, it has been clear that they would relocate themselves. The reason for more crocodiles (or perhaps the same crocodile) to be seen in urban areas is because crocodiles from Attidiya and Muthurajawela travel towards the Bolgoda Lake during their breeding season.”

Crocodiles have two breeding seasons annually. “One is from November to mid-February and the next is from May to August. There are four main migratory routes that they use for this purpose. Although crocodiles would live up to 80 years the most active time of their lives is between 15 and 40 years. So those between 20-25 years are strong and have a high breeding rate. Translocation also deprives them of their chances to breed. Since crocodiles are territorial animals they have demarcated their territories. Crocodiles walk and swim for long distances and during translocation their muscles and bodily movements become weak. Therefore they take time to adjust to their new territories and this gives a chance for strong animals to attack the newly translocated, weaker animals.” 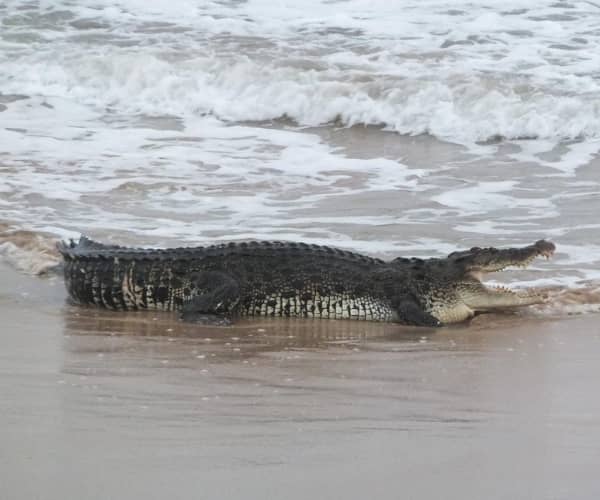 From an evolutionary point of view, the crocodile is acknowledged as a live fossil descending from the prehistoric era. Therefore, even though the crocodile is less important than an animal for humans, they are an invaluable asset from a global point of view. “It is these crocodiles that clean the waterways. They prey on weaker aquatic species. Once removed from a waterway people will witness the accumulation of dead fish which will emanate a bad stench. But this won’t happen if crocodiles remain in waterways. This is one of their major contributions to the environment. Therefore, what is important is to coexist with wildlife, posing lesser threats to their survival, and in turn, wildlife too will acknowledge the presence of humans,” Rathnasiri underscored in his concluding remarks.