Yapahuwa, a city of architectural excellence 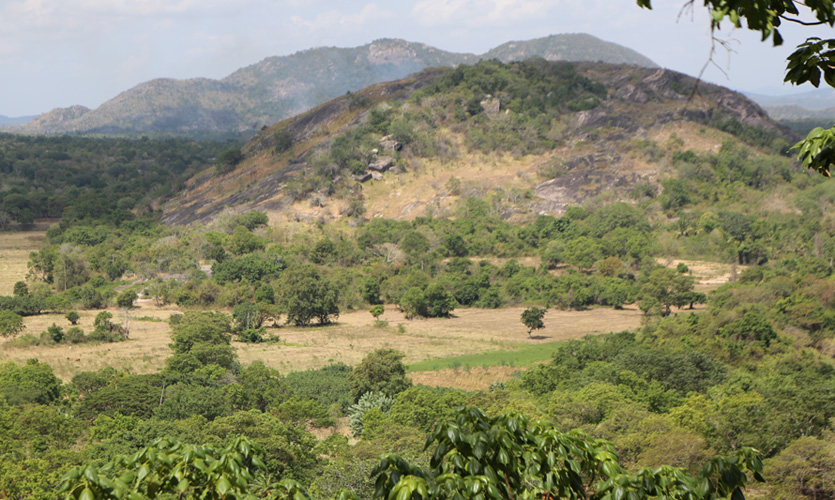 Sri Lanka was a land with a significant geographical setting, natural resources and a rich culture that attracted traders more often. Back then, it prospered with reigning kingdoms and the respective kings who fought for their land during different eras. Sri Lanka was home to nine kingdoms that introduced various cultural influences, technological advancements and engineering expertise for the future generations. Yapahuwa is its fourth kingdom ruled by King Buvanekabahu I, who established it with an aim to protect the sacred Tooth Relic. 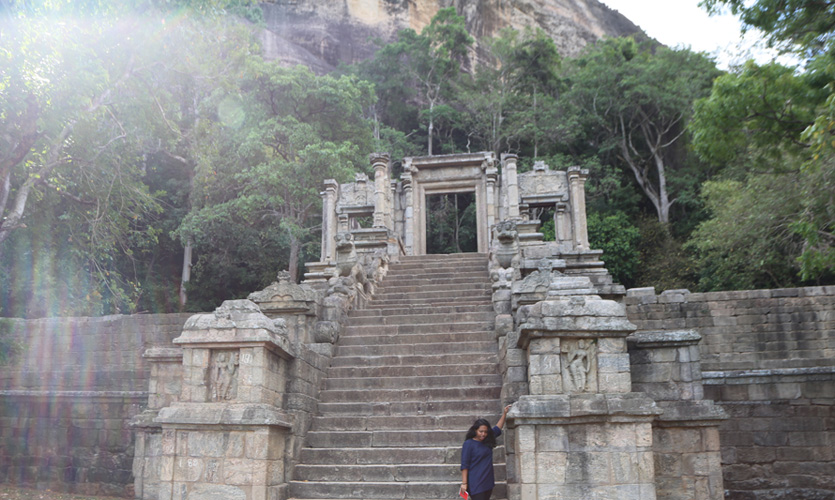 Yapahuwa was our first destination in a series to explore the fallen kingdoms of Sri Lanka and their associated archaeological sites. The city is situated approximately 140 kilometres towards Kurunegala along the Giriulla-Wariyapola road. With the help of our area correspondent Sajeewa Kottagoda and Gamini Munasinghe, Site Manager at the Department of Archaeology, Yapahuwa, we visited these historic sites. 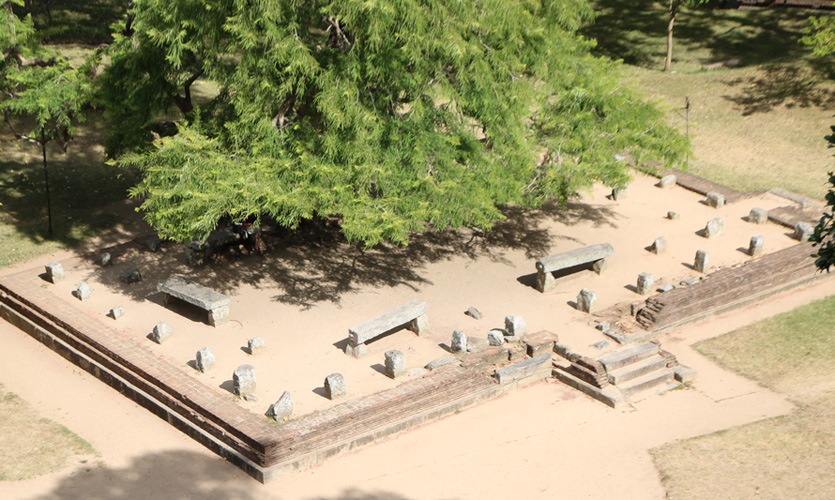 The history of the North Western province dates back to the times of the pre-historic man as there’s evidence of early civilisations. As such the province is regarded as an area that has a complex network of elements which depicts how early civilisations utilised resources such as water. Research has also discovered fossils dating back to the Jurassic period at Thambowa, Pallama and Andigama areas, which makes this province even more ancient that we thought. This is the province in which the Yapahuwa Kingdom once existed. 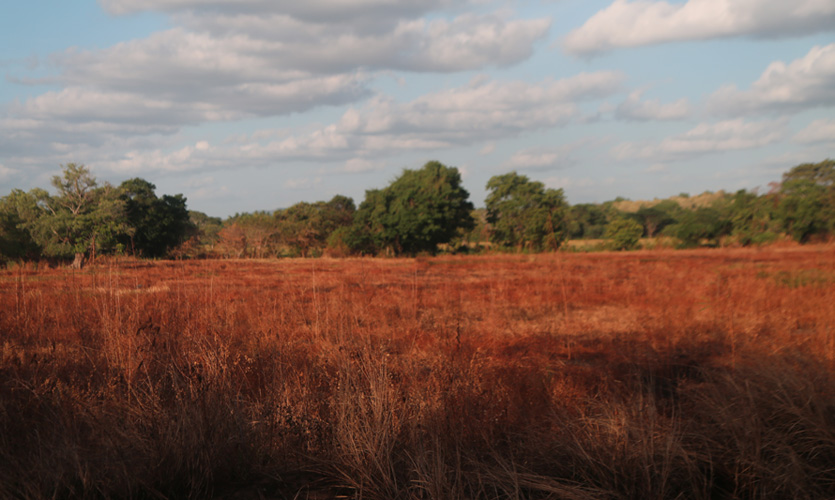 Yapahuwa is situated in the Pahala-visi-deka Korale of the North Western province and is approximately four kilometres southeast of the Maho railway stations, mid-way between Kurunegala and Anuradhapura. If you wish to travel by train, get off at the Maho station and take a bus or if you are more adventurous than that, simply trek the scenic countryside. 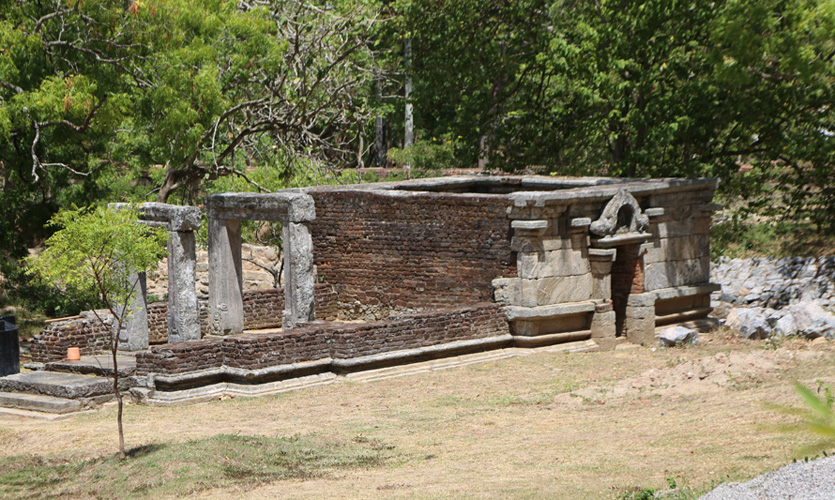 The Yapahuwa Rock Fortress bears a close resemblance to the Sigiriya Rock Fortress when looking at its plan. Both establishments were built with the common objective of protecting its people and sacred relics from foreign invasions. Yet they both have distinct features. While Sigiriya is protected by a wall that runs around its boundary, Yapahuwa has a wall that protects the inner city. Sigiriya has four entrances while the Southern entrance at Yapahuwa is permanently blocked. This is because Yapahuwa was built in such a way so that the King and his warriors only had to keep an eye on three entrances. Hence it was called a ‘three-way entrance’ or ‘thun-wasala’. 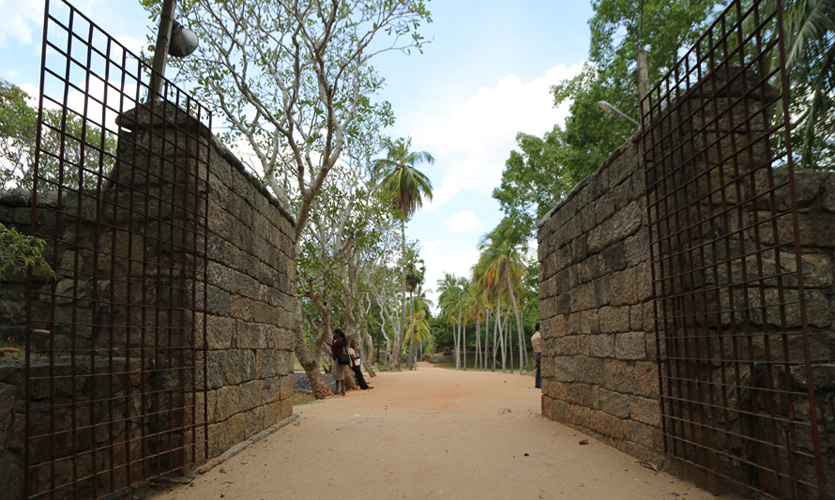 Since the Southern entrance was already blocked, the Tooth Relic was even safe. Today we could see remains of the palace which is relatively smaller in size, a courtroom or ‘sabhashalawa’ – the place where the King held his meetings and remains of a marketplace as well. What is quite significant about this Fortress is that the palace is situated at the base of the temple while Subha’s palace was built at the summit of the Yapahuwa rock since he made use of the location as a point of military defence. Hence the Yapahuwa Rock was named as ‘Subha’s rock’ or ‘Subha pabbata’.

When we think of Yapahuwa, the first thing that comes to mind is a flight of stairs and a majestic entrance. An interesting fact about the middle and the upper flight of stairs is that they are both built at a 70 degree angle (the next time you visit Yapahuwa you would see how difficult it is to climb up and down). The reason behind this construction was that the King wanted to ensure the safety of the Tooth Relic. Therefore it’s quite difficult to run upwards unless you literally crawl on all fours! 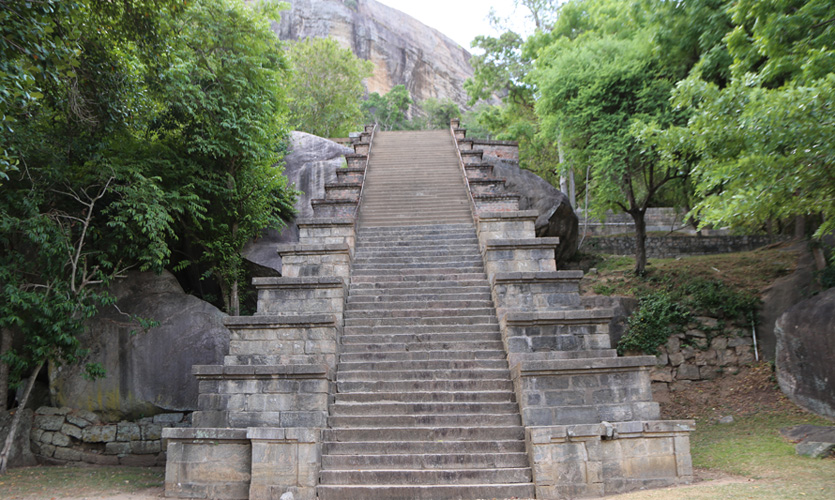 Just before you reach the upper tier which once housed the Temple of the Tooth Relic, you come across the ‘Decorated Staircase.’ This was found by H.C.P Bell – the first archaeological commissioner who held his post from 1810-1811. He was known to have discovered various such majestic palace entrances during his work. The Decorated Staircase has some interesting sculptures including that of the Yapahuwa Lion and dancers known to be inspired by the Kandyan perahera. 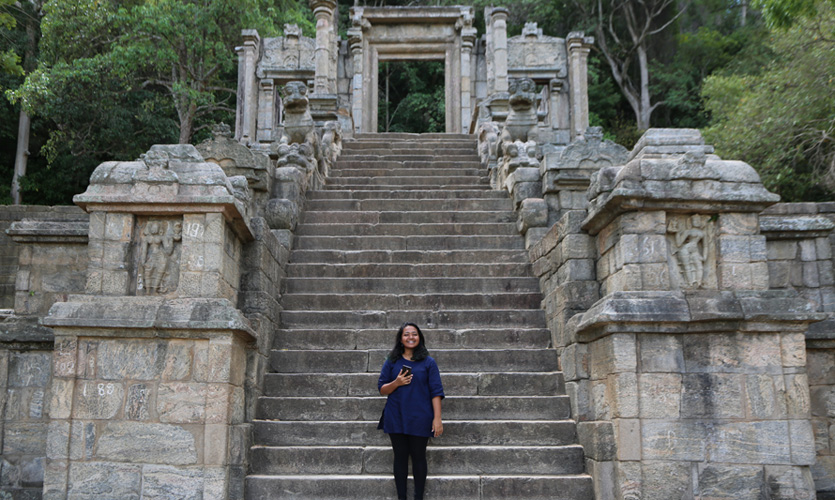 Yapahuwa Lion and the Chinese influences

If you have taken a closer look at the Rs. 10 note, you would see the image of a lion. That is the Yapahuwa Lion. But what is quite unique about this lion sculpture is that it is a hybrid between a lion’s face and a dragon’s body. Legend has it that although the sculptures were done by local craftsmen many of its designs were influenced by Chinese culture. Several other archaeological excavations have proven that Buvanekabahu’s hill-top kingdom had close diplomatic ties with the Chinese. During early excavations, several Chinese ceramics have been found and they were known to be some of the finest specimens found in the island. 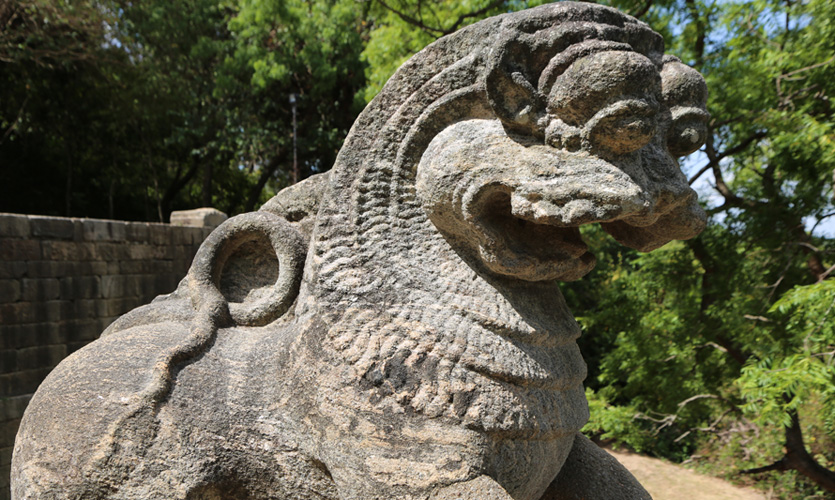 Unearthed too were a number of celadon pottery pieces and more than 1000 Chinese coins. According to historical records, Sri Lanka has been highlighted as a land rich in natural resources, which attracted traders from foreign lands. Historical records also state that ties between Sri Lanka and China date back to 429 AD where two monks have travelled to China to establish the Chinese Buddhist clergy community there. During the fifth century, a Chinese Buddhist monk has visited Sri Lanka thus justifying stronger cultural and religious relations between the two countries. 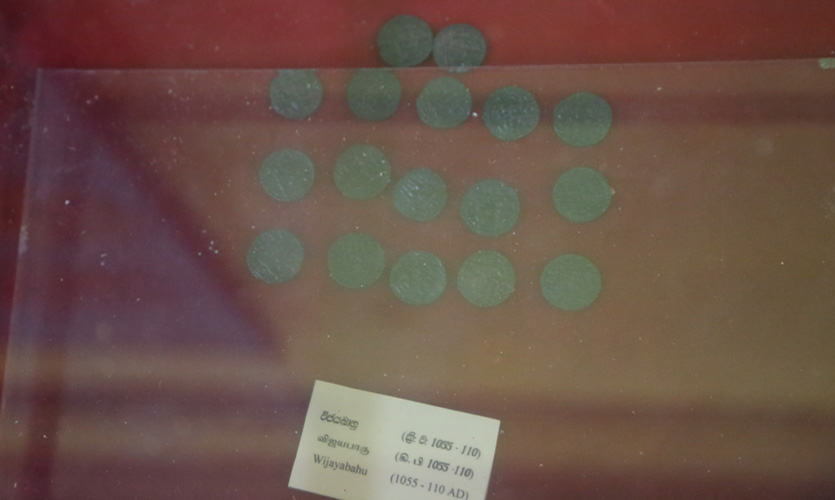 During the reign of King Buvanekabahu I, the Chinese were interested in taking away the Tooth Relic and several other Relics of the Buddha. But in place of these Relics, it has been mentioned that the King pleased them with other treasures. Records also suggest that the Chinese may have visited Yapahuwa to worship and show their respect towards the sacred Tooth Relic.

As mentioned earlier, the Decorated Staircase has some unique architectural elements, highlighting the significance of the then era. It has been mentioned that King Buvanekabahu I wanted it to be quite attractive since he wanted to establish Yapahuwa as a capital city. When taking a closer look at the dancers, it is quite evident that almost all dancers have Indian dance styles. One of the dancers have a posture with a close resemblance to that of Nataraja – a depiction of Hindu God Shiva as the cosmic ecstatic dancer. Another three dancers show the traditional ‘Leekeli’ dance which is also influenced by Indian culture. Quite interestingly several dancers also show modern gymnastic dance styles. In addition to that, those playing drums and other instruments are both males and females who are elegantly clad. 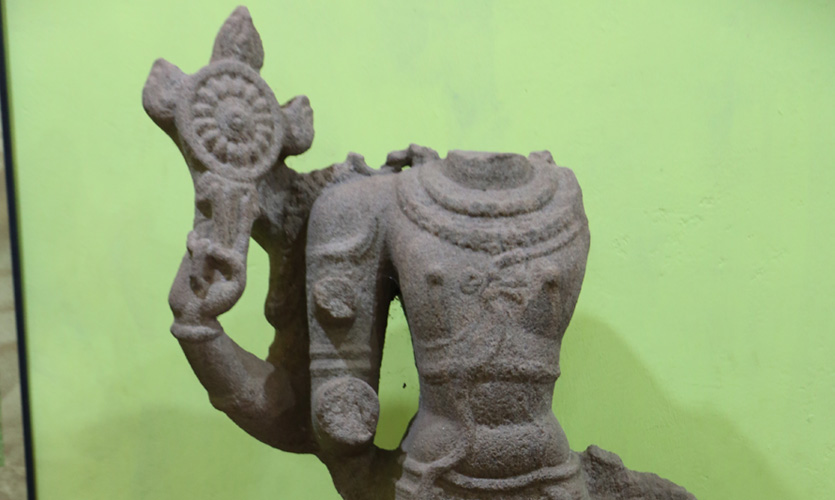 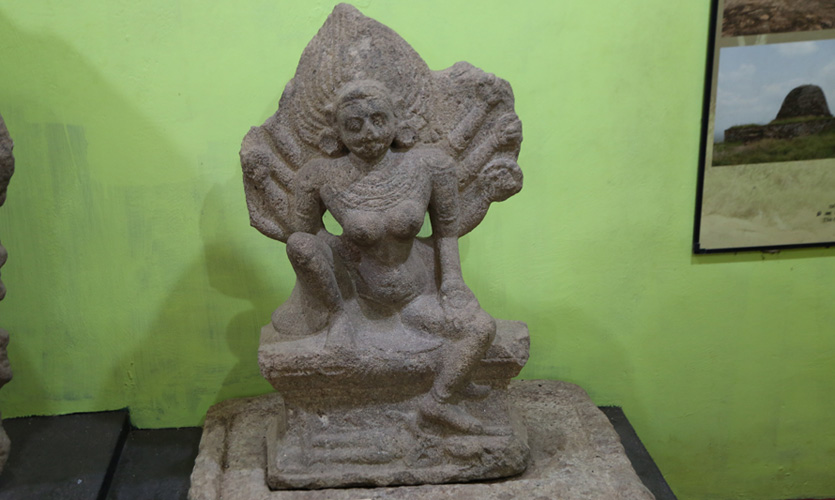 Just a few kilometres away from the Yapahuwa temple, there is an ancient burial site dating back to the Megalithic period. Situated in the Pinwewa area in close proximity to the Deduru Oya, this burial site proves the existence of the pre-historic man. Excavation work conducted by the Central Cultural Fund has proven that this ancient burial site and the Yapahuwa city have very close connections. Historical records state that early civilisations could be dated back to the Stone Age.

Interesting features about early burial systems could be identified when observing this site. Close to 100 tombstones were found when excavations commenced back in 1957 but today you can see only three or four of the remains. It has been observed that many of the tombstones were placed in the Cist Burial method while others were found in close resemblance to the Urn Burial system as well.

But sadly, this burial site has not been preserved and there is no indication of its existence. During our visit we too had to seek the assistance of residents to reach the site. The cists haven’t been preserved and if you happen to visit the place, they would easily be mistaken for a few slabs of rock lying on the ground. Therefore such ancient sites of pre-historical importance need to be preserved for future generations.

The Department of Archaeology and the Central Cultural Fund are conducting further excavations to find out more evidence of early civilisations.