Ratnapura, located on the Kalu Ganga, is a major city in Sri Lanka and is the capital city of the Sabaragamuwa Province. Its name has a Sanskrit meaning translating to ‘City of Gems’ and as such it is the traditional centre for the Sri Lankan gem trade.

Beside the industry of gems, Ratnapura also has large plantations of tea and rubber surrounding the city and well as an industry for juggery and production of rice and fruit.
A drive from Colombo to Ratnapura will take roughly 3 hours and the journey can be a bit exhausting due to the winding roads.

We found Ratnapura to be green and lush and while we knew that the city is famous for its gems, we were surprised to find how much more Ratnapura had to offer!

Bopath Ella
Bopath Ella up in Kuruwita, Ratnapura is a magnificent waterfall that cannot be missed when you are travelling in that area. It’s ideally supposed to be shaped like a ‘Bo’ tree (hence the name) because the water flows through a narrow gap and widens in the shape of the tree. Bopath Ella cascades down a height of 30 meters from the Kuru Ganga and the water is used for the paddy fields around the area. 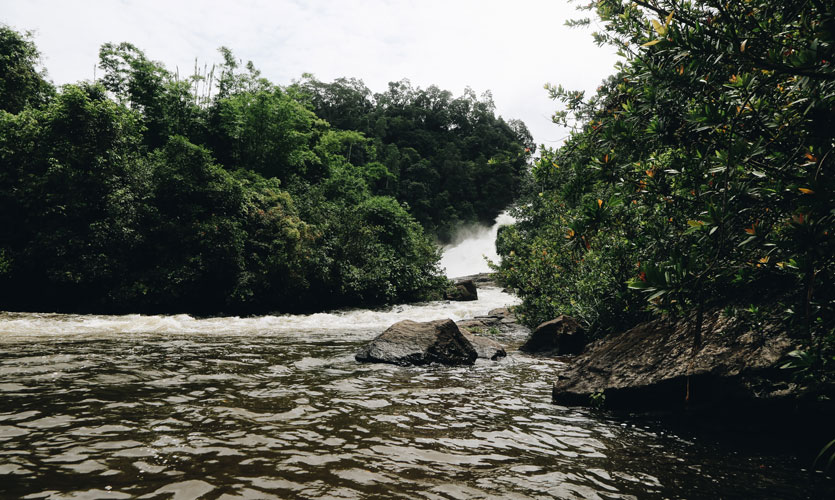 There are a lot of local myths surrounding the Bopath Ella. Many say that it’s haunted because a local village girl jumped into the fall and killed herself when her lover abandoned her and the girl’s ghost is said to haunt the waterfall appearing in a blue light.
We didn’t really see anything but the authorities didn’t also deny the claim when we asked! Another such myth is that the waterfall hides a treasure trove within and in order to collect it, a thousand human sacrifices must be made. 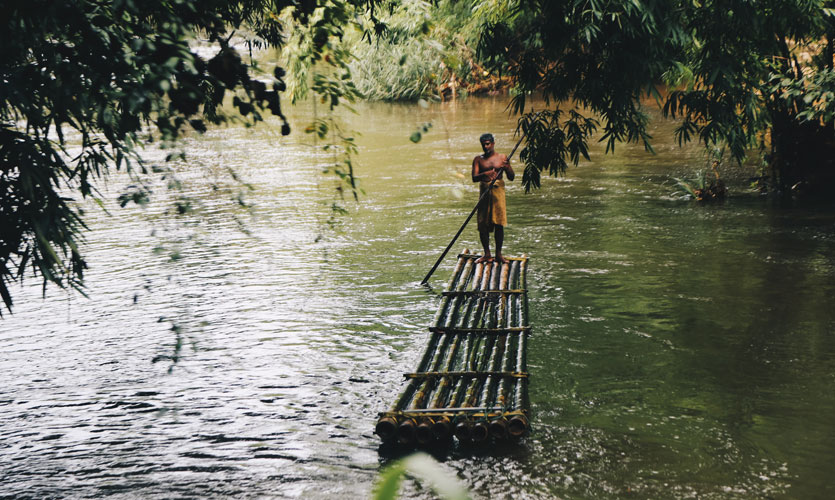 To get to the Ella you will have to turn to the Devipahala road and travel roughly 3km to the falls. Once you reach there you pay a small toll (Rs.20) at the gate and walk down to a pavilion to see the falls. If you are not satisfied with the view of the Ella from the pavilion, a bamboo boat ride can be taken to get a better view of the fall.   We hopped into the bamboo boat (which really is quite dangerous simply because it’s a flat surface of bamboo shafts with nothing to hold onto!) and floated through the river to be dropped off at the bottom of a small mountain.  From the mountain there is a small trek of around 15 minutes through a jungle to get to the waterfall and for those with a sense of adventure, it’s a trek worth making! 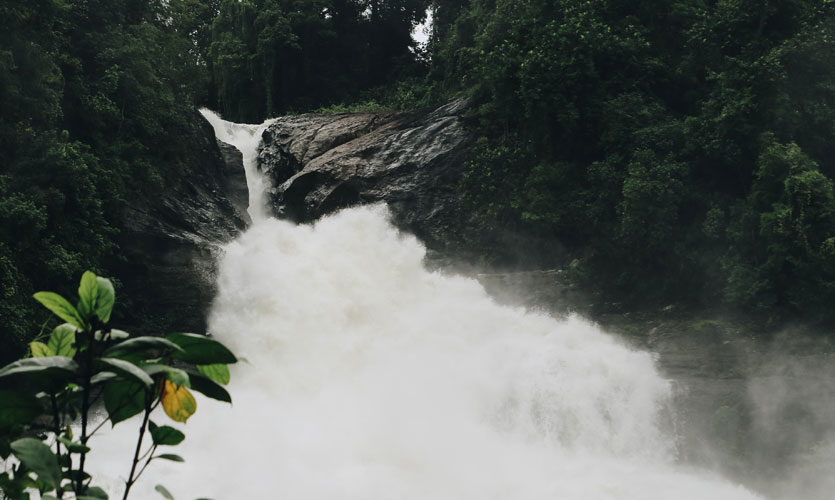 At the end of the trek you will reach a few big rocks at the very end of the waterfall and you can sit on top of these rocks and enjoy a more up close view of the falls. This is as far as you are advised to go to see the falls; the police informed us that a lot of people attempt to climb up the rocks to reach the top of the waterfall and tend to fall to their deaths more often than not. 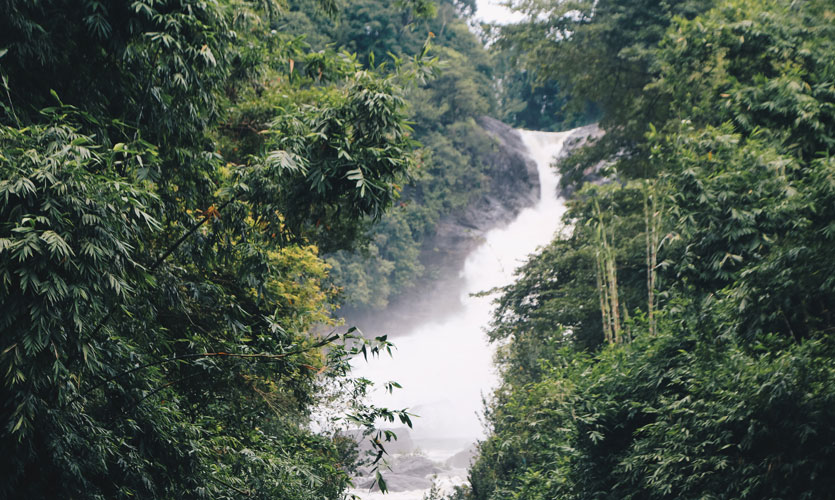 Pro Tip – You’ll have to take your shoes off to get on the bamboo boat but try to carry your footwear with you because you don’t want to be trekking through the jungle barefoot like we did! 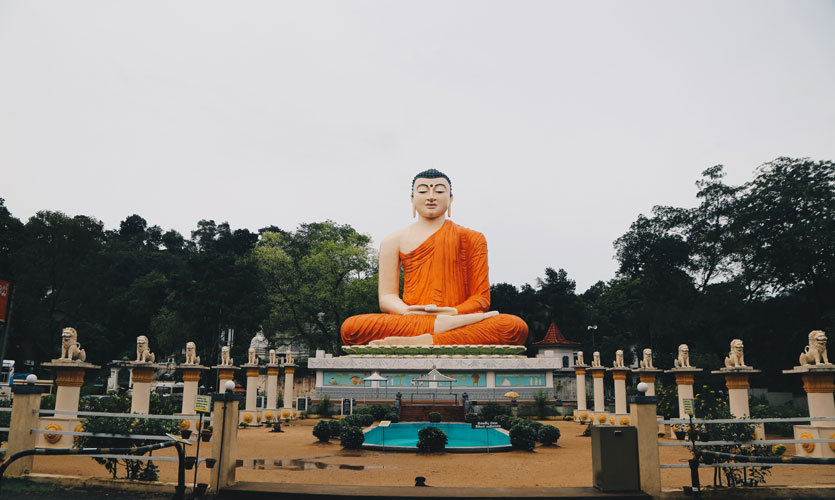 As you travel on the main road of Hidellena in Ratnapura, you will encounter a larger than life Buddha statue.  The Weeragoda Sri Maha Temple unveiled the Shakyasinghe Samadhi Buddha statue late last year in the presence of His Excellency Maithripala Sirisena.  At 84 feet tall, the statue pays tribute to the 8 feet tall Samadhi statue in Anuradhapura.

The Weeragoda Sri Maha Temple is of great importance itself as it was a historic temple built during King Seethawaka Rajasinghe’s era. Make sure to make a small stop on your way to see this iconic statue! 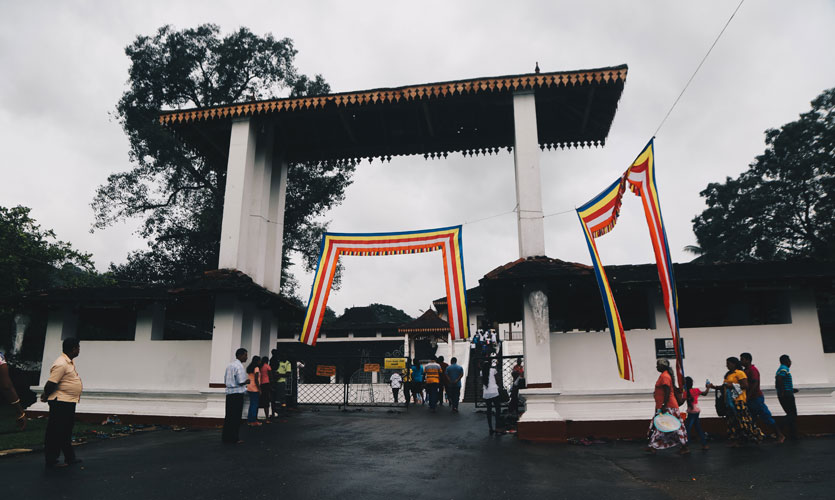 The Saman Devalaya is a temple dedicated to the deity Saman who is the presiding deity of the Adam’s Peak Mountain. Because he is considered as one of the guardian Gods of Sri Lanka, he is deeply revered in the Rathnapura region.

The shrine is said to have been built originally back in 1270 AD during the Dambadeniya era and later destroyed during the Portuguese colonisation.

It was finally rebuilt by King Rajasinghe with simpler architecture and today, the Shrine is a pinnacle of the Ratnapura area.

We went to the temple early morning on a Saturday and we  were quite surprised to see the crowd that has gathered at such an early hour. This just goes to show how deeply venerated the Temple is, not just to the people of Rathnapura, but to all Buddhists from around the island 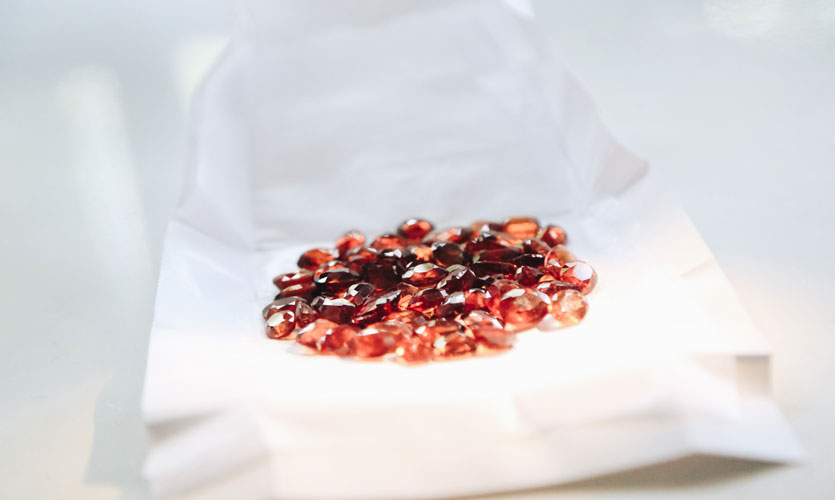 Ratnapura has always been the undisputed land of gems in Sri Lanka and one cannot visit the City of Gems without walking the Streets of Gems.  We drove to the town and agreed to meet a friend who offered to take us around. He told us to meet him ‘amba gaha yata’ (under the mango tree) and we desperately drove around looking for a mango tree in the town.
After a few minutes of searching in vain, our friend arrived to our parked spot and escorted us to the said mango tree.  Funnily enough, there was no mango tree but a large town square brimming with busy gem traders near the clock tower with a Bo tree for shade. When asked why this town square referred to a mango tree our friend just shrugged and said that it’s just what it’s called. 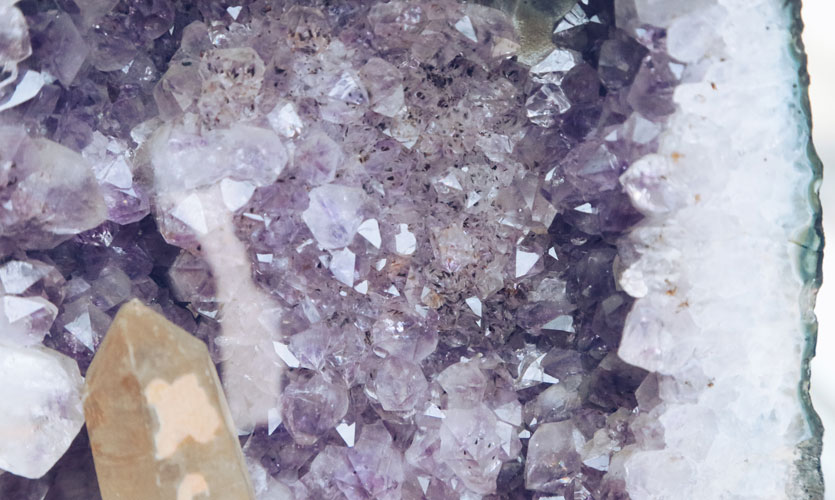 The main square is a gathering hub for expert gemologists and precious stone merchants and is the biggest open-air gem market in Sri Lanka. Here you will see dozens of merchants with little paper envelopes and pen lights chatting up potential buyers and showing off their cut gems.

When we entered the square, crowds of merchants swamped us and clamored over each other to show us their gems. From rubies to garnets and topaz to sapphires, there was nothing the market didn’t have.  Following our visit, we went into a few lapidaries in the town and watched in utter fascination as they cut and polished gems from scratch. Their technique is stunning as most of the Sri Lankan lapidaries use traditional techniques, modern precision cutting and highly skilled recutting to precise calibrated measurements.

At the main square, we met with Mr. Sunil Asoka, who sat us down to tell us a little about the Ratnapura gem market today. He told us that the once great precious stone market has become a common market today.

“We have no money, no gems and we can’t do our job anymore.”

Sunil then spoke about the tourist market that has once bought so much business to the town but has now dwindled down due to the lack of supply. 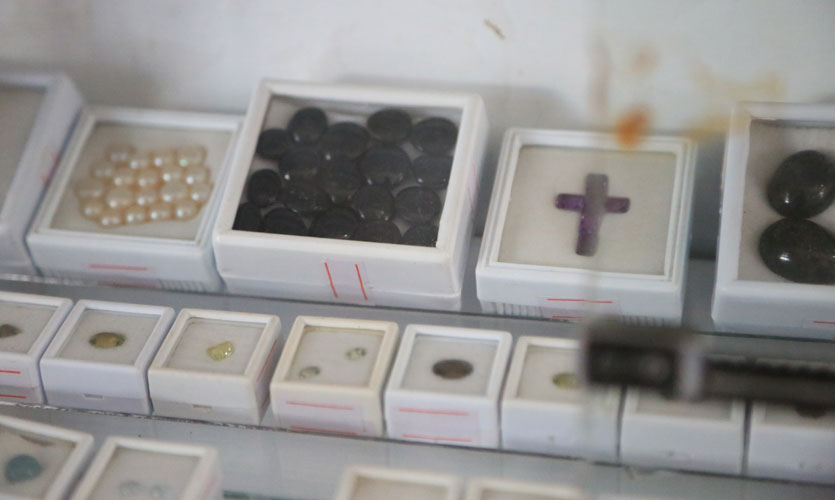 While Ratnapura has all the gem experts and gemologists with enough practical knowledge and experience, it all goes to waste with the lack of precious stones and the proper technology to compete with other gem markets in the world.

“We don’t get any income” he commented as several other merchants around him nodded in agreement,

“We come early morning, dressed up and ready for the day but we go home extremely disappointed. It is true we need to protect the environment. But we must also take its natural resources in a proper way and with many years of experience we know how to do that the right way. If only someone knew our plight!”

The proof of his words was around us. While the main square had an abundance of gem merchants, the buyers were very few.

However, despite the struggling gem seller, Sri Lanka remains to be one of the largest exporters of gems in the world. 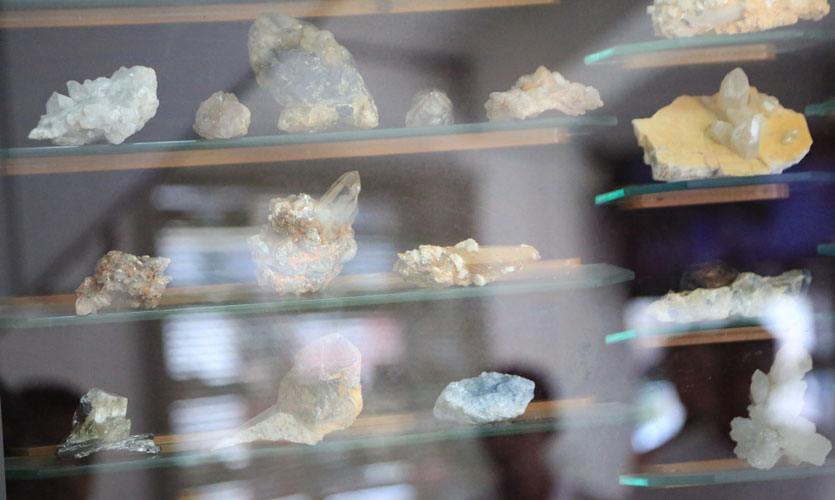 The National Museum of Ratnapura is one of the main national museums in Sri Lanka. It exhibits prehistoric archaeological inventions, artifacts and models relating to the area as well as weaponry and guns.  The grounds of the museum contain a palaeobiodiversity park with life sized sculptures of animals that were believed to have existed in that region.
Unfortunately the day we went the museum was closed for renovation but from the comments we’ve heard from those who’ve been there – it’s worth a visit!

A gateway to other attractions 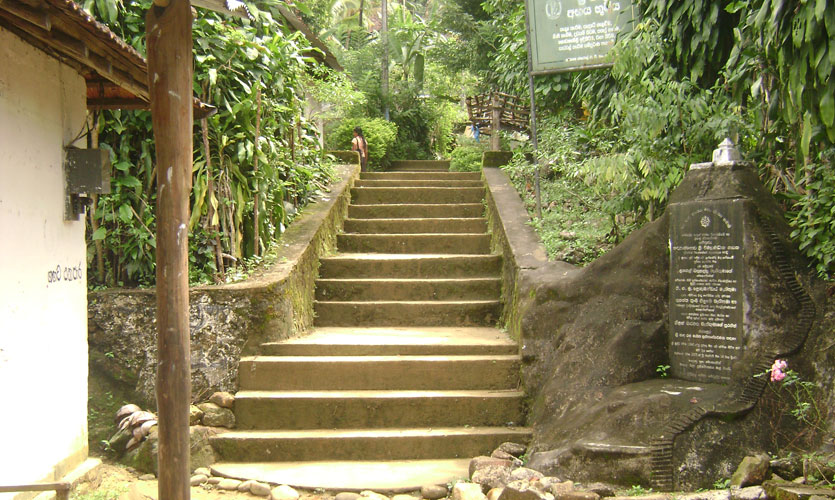 Ratnapura, with its central location serves as a gateway for other tourist attractions. Ratnapura has its own entrance to climb the Adam’s Peak but many say that this entrance is more daunting and difficult than the other.  It’s also close to Kitulgala where white water rafting is a popular sport. You can also find easy access to the Sinharaja Forest Reserve and the Udawalawe National Park.