Among the unclean, dusty and badly maintained streets of Pettah, you would stumble upon the bright architectural monument which is hard to miss is Jami-Ul- Alfar – commonly known as the “Red Mosque” or “Rathu Palliya” for obvious reasons as its exterior and interior are predominantly red. 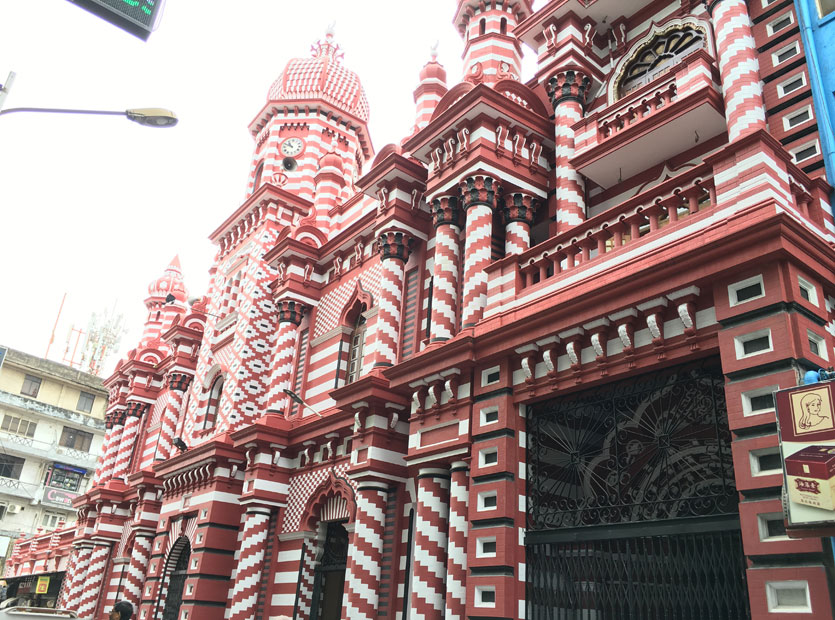 The hubbub of Pettah is soon forgotten the moment you step in to this iconic mosque where you would meet the sound of peaceful silence. You are likely to witness about 10 or more people seated at the steps inside the mosque, probably taking a break from the incessant tooting of horns that has become a common practice in Pettah. 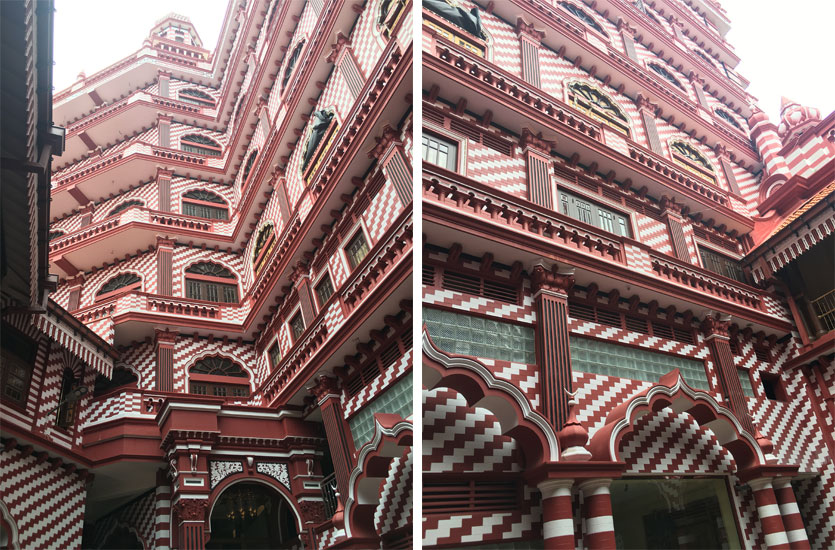 This century old mosque does not allow women in for prayers given the need for segregation in Islam and the reason behind why the mosque was first built. The mosque was primarily built as a place to offer prayers for men working in Pettah and it is not a common sight to see a significant proportion of women working in this commercial hub. However, the mosque’s expansion program includes an area for praying and resting for women during Fajr and Isha prayers. Although women aren’t permitted in to the prayer halls, they are allowed in a few feet until the open-to-sky hall.

I walked in, feeling skeptical about the sort of reaction I would get given the fact that females were not allowed. While some did look at me like I was a foreign creature to have entered the premises, I felt welcomed by two old men who were seated along the steps, just outside the prayer hall. I was told really kindly that I could not go beyond where I was standing and they also added that it was the same concept in the higher floors – so I wasn’t really missing out on much.

The exterior: I have been to many mosques, but the red mosque is definitely the most unique mosque I have ever come across. In one word, it is incredible. Its existence is pretty significant due to the outburst of red and white. The vibrancy of the red is very likely to give you life by just looking at it. You can say a lot of thought and hard work has gone in to the placement of the red and white bricks as the arrangement is not faulty. Ornamented with domes, this architectural masterpiece of the highest order is one of the finest structures your eyes will ever witness.

The interior: the interior sticks to the theme – red and white bricks along with red and white candy stripes. Upon entering, you would see an open-to-sky hall which is surrounded by a lining of steps that is used to get to the prayer hall or just to rest and close oneself away from Pettah’s distress. Glass chandeliers with Arabic prints assist with the lighting. The red mosque really is very red including red carpets for the prayer halls.

Just like the exterior, the interior is majestic with wooden stairways and pillars topped with wooden carvings.

From my experience, the area for ablution at mosques is pretty unclean and overlooked, but the one at this mosque was impressive with a clean, blue-tiled pool and neatly painted red and white striped pillars that resembled candy. 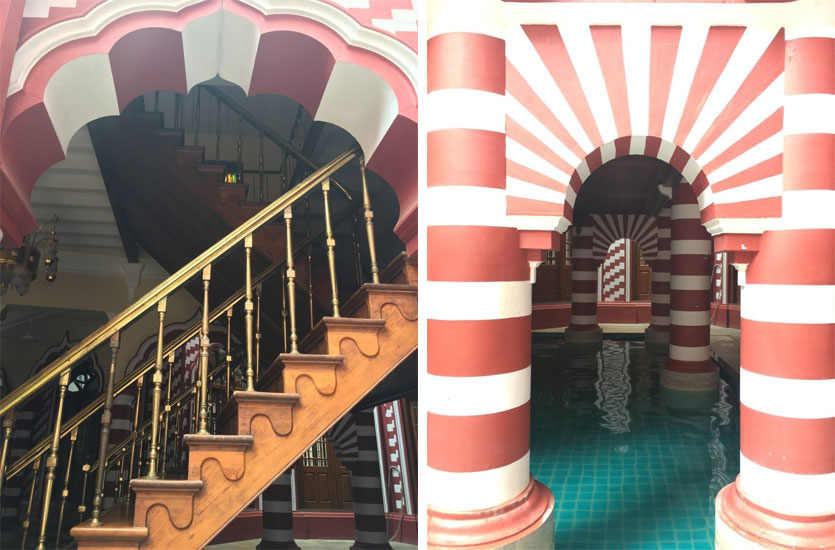 The design theme of the mosque hasn’t budged which has led the mosque to become a popular must-see among tourists. While non-Muslims are allowed inside the mosque as long as congregational prayers are not in process, appropriate clothing is a requirement.

The red mosque has seen a rise in its popularity on a very consistent basis – so much that it is constantly under construction for expansion. Most of the time, the worshippers have to extend out on the streets for congregational prayers.

So the next time you are around Pettah, step in to the oasis that is located in between the hustle bustle and indulge in the magnificent architecture!