If Christian Grey was a Sri Lankan

Valentine's Day is like a national holiday for any Sri Lankan. Just like another public holiday, an average Sri Lankan would prepare for it weeks ahead. While preparations are steadily on the way, I realized that the first ever 50 Shades of Grey debuted on Valentine's Day a few years ago, and the world went temporarily crazy. By ordering the book online, queuing up to watch it at the local cinema, and paying more visits to Midnight Divas, Sri Lankans were clearly latching on to the concept. 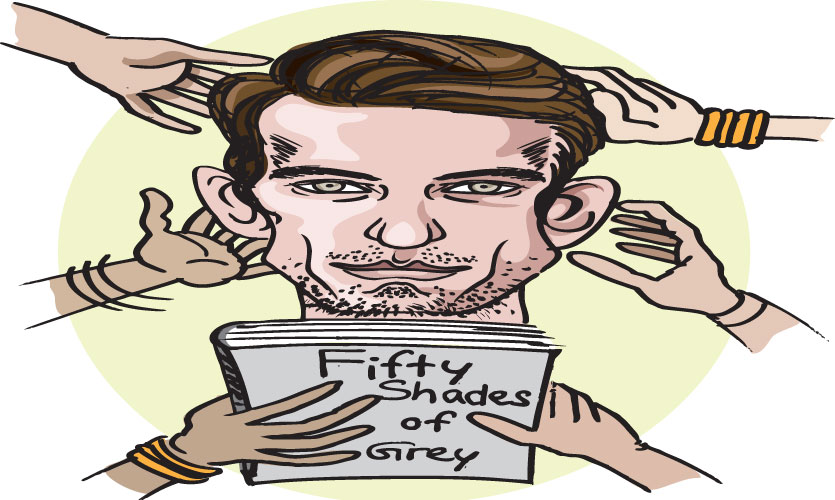 It occurred to me that this ‘fantasy’ would appeal to anyone because Christian Grey was a billionaire, good-looking, and owned a helicopter. What would have been the case if he were Sri Lankan and not all of those factors combined? I just had to know.

1. Feeling Blue?
He would have been to one of the famous government-run schools for boys like the one in Colombo 03 (ahem!); along with him he would have had two generations of males who were also educated in the same institution and would bleed blue and gold if pricked. The local Mr Grey would always be seen at the ‘Big Match’ and Bradby Shield – in the most exclusive seats, of course.

2. Playing at Aristocracy
His father would have been a state minister. He’d have grown up with a dash of Sri Lankan aristocracy, with fond childhood memories of playing cricket down Reid Avenue and being driven to school in Thaathi’s town car albeit being fifty feet away. He doesn’t own a helicopter but will try to use his connections to the regimes former or present to secure anything from evading a traffic violation that is swept under the carpet, unpaid bills electricity bills, or summoning the underworld.

3. The Bawse
Like many elite Sri Lankans, their first job was at a world-famous local apparel giant. It’s a rite of passage for many to have their careers bloom here, and he became the CEO at 24; now, he drives a swanky car that is on full display on his public Instagram profile where the hashtag ‘SriLankanRichKids’ is found frequently.
He isn't afraid to post selfies – after all, self-obsession is the new black. He believes in having total ROI for the brand-new suit he has invested in, too.

4. The Socialite
He can be found at Colombo’s distinguished (only) club on weekends with a variety of Caucasian women. He remains aloof when he sees the clear astonishment in their eyes as he proceeds to pay others' bills with his credit card in their midst, but this Mr Grey can be the very one who pretends to have left his wallet at home when out with his bros.

5. The Suave
He has many friends. Local and foreign, and they tend to be range from politicians, local celebrities, to big-wigs in his company. They may think they’re benefiting, but Mr SL Grey has a wild streak of Sri Lankan cunning that can surpass a kattadiya.

6. The Golden Child
He is undoubtedly an Ammi’s boy. His mother believes that no one can light a candle for her son. If he is a Christian, his mother would light one hundred candles in his name while reciting seven Hail Marys.

7.  Work Much?
He has several gym memberships that he uses each facility on a select day of the week. The personal trainers consider him as a mini-celebrity and often ask to take selfies with him; after all, there is power in association.

8. Modesty…What?
Unlike Anastasia, you don’t accidentally stumble on his wealth. The local Mr. Grey hasn’t heard of the concept of modesty. In fact, he may even entice his prey by boasting of assets that he or his family doesn’t own. He might even say that he is thinking of entering politics in the near future.

9. A Good Sport
The local game of cricket is beneath him. The brief stint overseas for his degree gave him a new found love for football. His knowledge of local politics is what is derived from trying to copy opinions of his colleagues or superiors.

10. Me Time, Spa Time
He isn’t afraid to visit the priciest salon to groom his beard and invest in quality me-time in a spa. He, like the women who endorse Garnier, knows he is worth it.

If Christian Grey was a Sri Lankan, he would still be amongst the exclusive and ‘most-wanted’ – I wouldn’t be surprised if he even referred to himself by this name as well! However, having the material qualifiers, the local Mr. Grey would profess that he believed that his future wife should submit to him completely, give up on a career, an opinion, and be chained to an apron for the rest of her life.