Voyeurism and Other Kinks

When technological advancements increase by the minute, high-tech sophisticated gadgets get smaller by the day. While this may be the epitome of the human genius mindset, voyeurs use this to their benefit by spying on women and children in private and this has now escalated to public encounters. Public washrooms, hotels, shopping malls, public transport and parks have now evolved into places where voyeurs come out to hunt their prey. 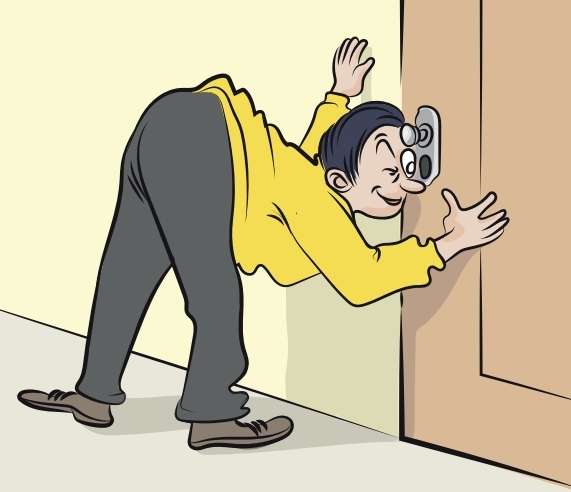 “I used to come home after work at 9.30 pm. As I got down from my office transport and entered my home. We heard a noise, like an animal jumping into the garden. My bathroom window was facing my parents’ bedroom window from a distance. As I went to the bathroom to take a wash my mum went to her room for something and suddenly, she saw a man trying to peep through the bathroom window and she screamed. Since that day, to date I am scared to go to the bathroom with the lights on.” says Shaziya, an employee in a reputed organization, recalling her horrible encounter. Shaziya is not alone. The number of peeping toms caught and cases of obstruction of privacy have significantly increased in the country. The recent uproar which went viral on social media, when victims resorted to ‘name and shame’ such perpetrators is one way to create public shame and expose indecent doings.

Michelle* shares her incident that resonates with the viral social media post, “5 friends were at the coffee stop and one of my friends noticed this guy video recording her. The way he was holding the phone was not the way if you are using your phone. And honestly, we didn’t want to make a scene. I identified him and anyway we only had little time to ourselves (most of us have kids at home) so continued our chat. My friend switched to a chair that doesn’t face him.”

These headlines don’t divulge a bigger picture as a vast number of such incidents don’t get reported. This seems to be changing for the good now.  Many women have come forth to deliver instant justice by confronting them on the spot and some even resorting to lodge police complaints which will hopefully result in the prevention of other women been victimized.

Tammy* is one lady who did exactly this; “I have been videoed twice at Majestic City and both times I made them delete it and then I smashed their phone to the ground.” While this may come off as brave, not every woman has the capability to stand up to such people.

On her way home after work, Sabrina* was faced with a horrifying incident that still traumatizes her to date. “On my way home after work I was with my coworker, as usual, we were waiting for the bus. A semi-empty bus arrived and we got in and found ourselves a seat. I was seated next to the window and my coworker right beside me. We were chit-chatting and suddenly I notice there’s this man who’s also wearing a sarong and a shirt sitting in the opposite direction to where we were seated. I did not feel anything odd or fishy and we continued with our chats. Suddenly my eyes moved towards the guy who’s seated next to us and I saw this guy was masturbating. I got very scared and embarrassed and immediately told my coworker. She saw it too. At that point, I wanted to scream at him but I stopped myself because I’ve come across several incidents where the victim gets screamed back in foul language. When he saw we noticed him, he immediately got off the bus and he took off. What we saw afterwards is even worse. There was semen all over the seat and an unsuspecting  lady sat right on top of it before we could stop her.”

Voyeurism happens everywhere and anyone can be a victim of it. There is no age or gender specification for such occurrences. In the past, we’ve all seen incidents that were shared on public social media platforms where a male employee recorded and released explicit video footage without the consent of a fellow female employee with whom he was having an affair. Nobody expects such things to take place in a corporate office given the strict HR policies that are in place.

Christine Abeysekara, blogger and Instagram influencer has faced such invasions of privacy via online platforms. “Online of course I have issues every day. People (mostly men) take my pictures, make fake profiles, talk to other people pretending to be me. It’s the problem with having a public profile so that’s my own fault - however, it’s still illegal to take other people’s content and post it” says  Christine, reporting such harassment has less to no effect as the laws in Sri Lanka is not strict enough. “Also, so many men send disturbing pictures of themselves and it’s disgusting” Christine concludes.

Masha Razumova, an expatriate lady residing in Sri Lanka for nearly half a decade, says she had to face an unfortunate incident. “One police officer was checking my driving license and his partner was touching his privates through the uniform while staring at my legs. This happened in broad daylight on the main road with many people around. I preferred to ignore his actions, got my papers, and left the scene”.

A psychological aspect
It is believed that voyeurs should be treated by mental health authorities as it is a behavioural issue. According to the latest version of the DSM (The Diagnostic and Statistical Manual of Mental Disorders) handbook used by psychologists, “voyeurism” is a paraphilic disorder which is defined as, “the act of spying on others in private activities such as sex, changing clothes, and/or washing”. Raneesha De Silva, Forensic Psychologist and a Lecturer in Psychology with clinical experience across maximum-security prisons, military hospitals, and high secure hospitals says that “Individual characteristics such as low impulse control, lack of intimacy and social skills, technological means, and/or social, religious limitations which restrict access to sexual material or consenting sexual partners, lack of sex education which has resulted in misconceptions regarding healthy sexual behaviour may contribute to deviant sexual acts as well.”

Generally, if the voyeuristic behaviour continues for over a period of six months, if the persons’ sexual gratification is primarily from observing others naked, undressing, changing clothes, or others in sexual intercourse, it is then considered as a voyeuristic disorder. However, Raneesha further states that an important disclaimer would be if voyeurism took place with a consenting adult or intimate partner as an act of foreplay.

When asked about what goes through a person behaving in a voyeuristic manner, Raneesha says that “individuals who engage in harmful sexual acts such as voyeurism, have dysfunctional beliefs and thoughts about what ‘normal’ sexual behaviour is. They view other people as sexual objects; or consider their actions not to inflict any long-term damage. They perceive other people to be hostile and hence use forceful means to dominate over their rejections as an act of taking control or blame their actions on the inability to control powerful urges (“it is what it is”) or they either feel entitled and superior to others to exploit them.”

A criminal offence?
Legal expert and attorney at law, Harshana Nanayakkara says that “there are no laws of privacy specifically designed in this country. For such offences, we have to run with the Penal Code.” Section 345 of the Penal Code of Sri Lanka recognizes sexual harassment as a criminally punishable offence. If the perpetrator is convicted, the penalty is imprisonment up to five years and/or a fine. Harshana also states that unless there is criminal conduct such as taking photographs without consent and editing the same with sexual content and publishing it on websites or using pictures for blackmail purposes, it would be difficult to convict a perpetrator purely on the invasion of privacy. “This is why we have advocated to bring in a fundamental rights section to the constitution to introduce privacy,” explains Harshana.

There is no justifiable right for simply taking pictures without consent in a voyeuristic manner as Sri Lanka does not currently have any laws of privacy in practice. The importance of having the right kind of law will be the remedy to this horrible practice of voyeurism. This will also strengthen the concept of the right to privacy for every citizen in his/her private life.