Phantoms of the Night

They are shy and elusive but oftentimes mistaken as potential threats to humans. The wild felines in Sri Lanka not only comprise leopards, but the Rusty Spotted Cat, Fishing Cat, and Jungle Cat are also members of the cat family, frequenting the wilds and urban forest patches in the country. The recently launched ‘Phantoms of the Night’ a comprehensive book written by Dr. Thilak Jayaratne, co-authored by Dr. Janaka Gallangoda, Nadika Hapuarachchi, and Madura De Silva along with photographs of all four species captured in their element, takes readers through the evolution of cats, their behaviors, breeding patterns, lifestyles and most importantly, the importance of protecting these species. 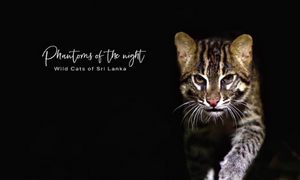 On a lucky day, a wildlife enthusiast could spot a leopard at a National Park. But this is not the case when it comes to smaller cats. “Because of their elusiveness, the smaller cat species aren’t studied much,” opined Madura De Silva, zoologist and wildlife researcher. “But even though they haven’t been studied, the fishing cat, for example, can be spotted in urban settings as well. Despite the name, they don’t entirely depend on fish for their diet and with changing environments, they adapt. The Rusty Spotted Cats too come into close proximity with human settlements if there are forest patches. However, in the case of jungle cats, they live entirely in the dry zone and their habitats are shrinking daily. Even though they’re in national parks, all other dry zone areas have become vulnerable due to various projects.”

The objective of compiling the book is to project these species as key figures in an area so that corporate entities could look at purchasing land and protecting these species. “If a particular area is chosen to construct a factory but it is also a habitat for fishing cats and jungle cats, we can highlight their importance to the ecosystem and protect these areas. The book gives an idea about their elusive lifestyles. We captured them mating and sometimes even their young so that people will get to know more about them,” he added.

De Silva further said that while the fishing cat and the rusty spotted cat have a nocturnal life, for jungle cats it is the opposite. “As more people move into the wilds, there are more encounters. Although they’re not rare species, no population estimates have been done as they are quite elusive.”

Capturing these species in the wild has been the biggest challenge for the authors. “Since they’re territorial animals they have their ranges, like leopards,” explained De Silva. “Once we identify a range we put up camera traps and identify their movements thoroughly. We study features such as the time of day they are being spotted, whether they come out during rainy weather etc., and mark an area for photography. Thereafter we put up dim lights so that they get used to it.”

What is quite interesting is that apart from jungle cats, the other felines have been photographed outside protected areas. “That’s why we could put up dim lights and monitor their behavior without a lot of restrictions. This is proof that they live apart from protected areas and that’s why we need to protect them,” he opined further.

Speaking about threats, De Silva said that wild cats are getting used to the urban setup as wetlands and forest patches are shrinking. “As a result, they get used to road networks and there are a lot of road kills. Therefore, the improving road network is one of the biggest threats for them. For example, the rusty-spotted cats prey on large insects. Whenever there are street lamps by the roadside bordering small forest patches they come out to the road to get insects who have fallen after hitting the lights. Once they’re on the road it makes them vulnerable to road kills.”

Diminishing prey, impacts of pesticides and weedicides too are concerns for researchers as they believe that most amphibians and aquatic fishes, which are potential prey for these wild cats may carry lead or other heavy metals.

The authors, who are ardent nature enthusiasts, have drafted several other books on Sri Lanka’s wildlife including Sri Lankan Primates: An Enthusiast’s Guide and Mannar Unbound. ‘Phantoms of the Night’ is a general introduction to the wild felines in Sri Lanka but the contributors believe that more research needs to be conducted on their behaviors. “We have noted a lot of behavioral patterns here but more studies are required,” De Silva further opined. “But as the next step, we are going to conduct an islandwide study about their distribution because a thorough distribution pattern analysis is required so that we know the range of each animal. In fact, the jungle, fishing, and rusty-spotted cats overlap their ranges. This is because their prey species are different. Therefore they have different feeding patterns and they don’t compete with each other when it comes to food. Hence, they live in harmony.”

Patience had been much of a virtue over the process. The book is a labour of love on which the team of researchers, photographers, and naturalists have been working on for quite some time. It is in fact a masterpiece, capturing readers with its smooth tone and language. The photographs mounted at the recently concluded exhibition spoke volumes about the effort that had been contributed behind the scenes. “Not to forget the leech and mosquito-bites, hiding behind camouflaged tents, holding lights, trying to get the best shot,” recalled Dr. Thilak Jayaratne, author and well-known wildlife enthusiast.

Every turning page of the book will keep you admiring the photographs as their mischief, curiosity, love, and power have been captured in the right proportions. But if you read between the lines, you will realize the importance of protecting their populations, now and in the future.