Brown bread has become a staple in my household, thanks to my ulcer infested gullet. Since it’s only me that eats it, there is always some remaining bread. One of my few pet peeves includes wasting food. I can’t stand it and I am very strict with myself regarding it.

Thus the birth of this sweet treat! It's super easy and requires a measly amount of preparation time. Infusing cinnamon and vanilla to this recipe, this dessert tastes like a big warm hug. Given the fact it is brown bread, there is a strong argument of it being a healthier option. But it gets better. Just by baking this, your senses are guaranteed to be intoxicated with a brew of divine scents.

While it is only I who eats brown bread, EVERYONE certainly eats this Brown Bread Pudding… and to those die-hard Bread Pudding enthusiasts who believe that only white bread will do - THIS recipe will certainly make you eat your words. 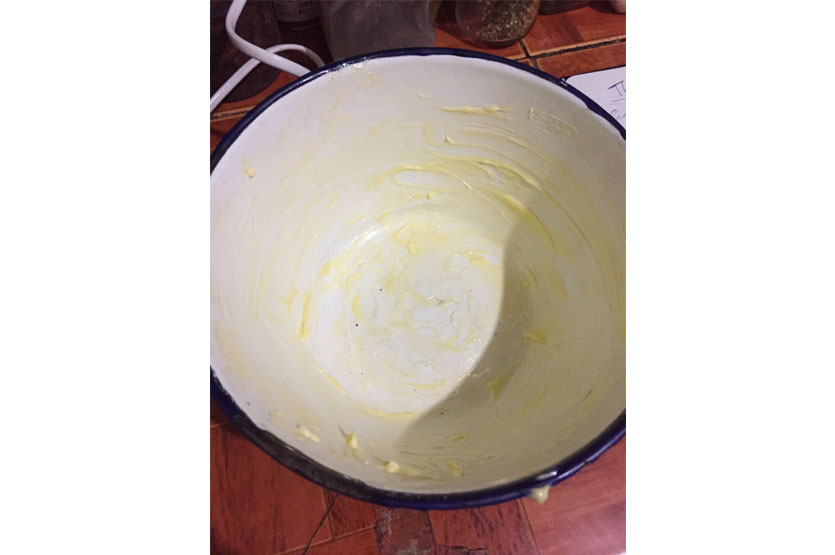 Preheat the oven at 180 Celsius. Prepare a baking dish and set aside. 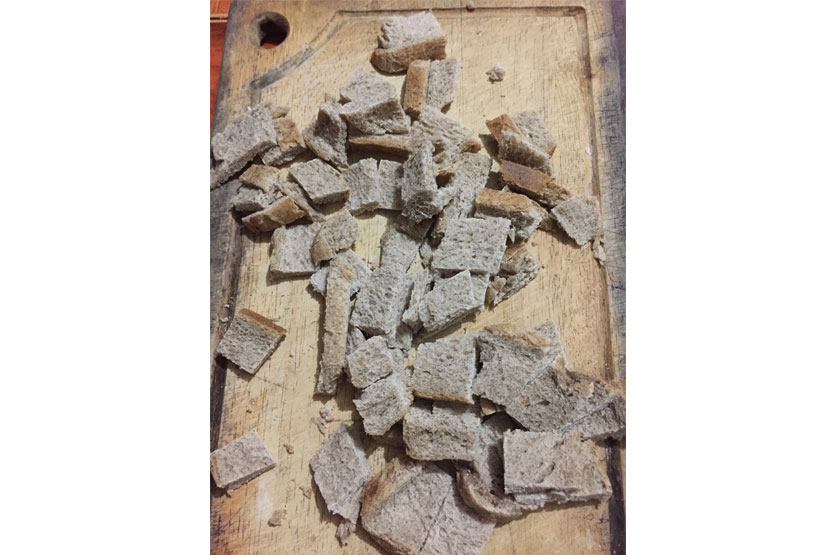 Cut bread slices in to squares and set aside. 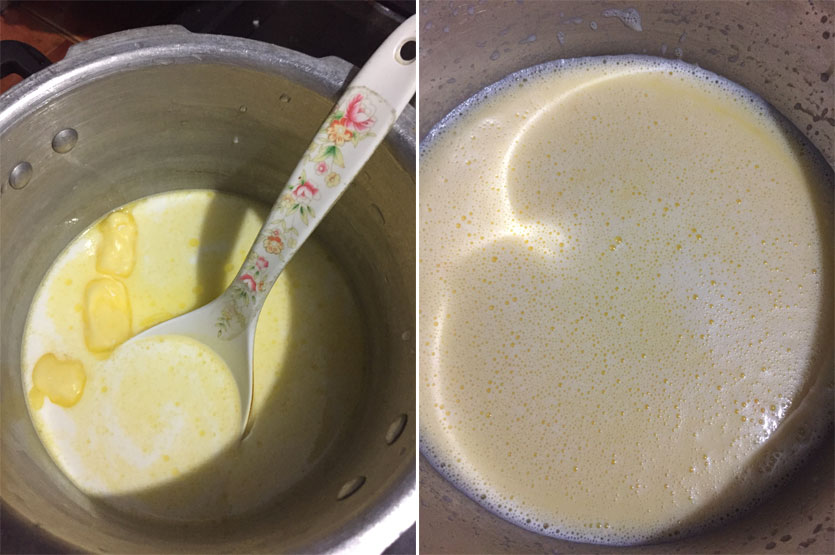 Pour milk in to a heavy based pan, add the butter to it. Stirring continuously melt the butter on a very low heat. As soon as the butter has melted take it off the heat. 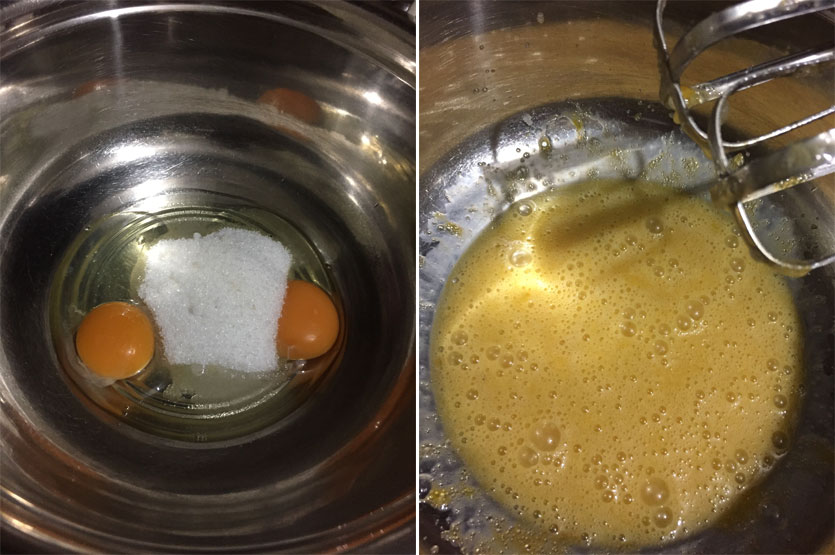 In a mixing bowl whisk together the two eggs and the sugar.

Whilst whisking the eggs, pour half a cup of the butter-milk mixture in to the bowl and whisk briskly for a few minutes. 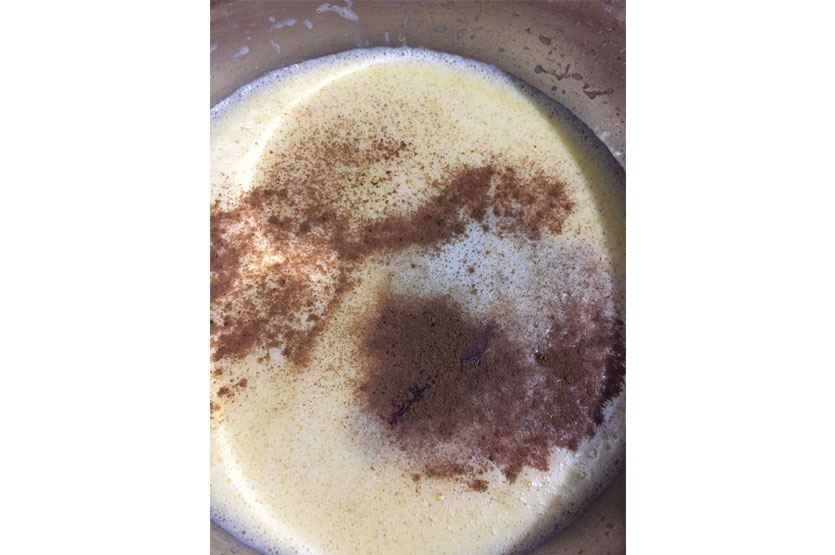 Pour the rest of the butter-milk mixture in to the bowl, add the vanilla, cinnamon and whisk until it’s well combined. 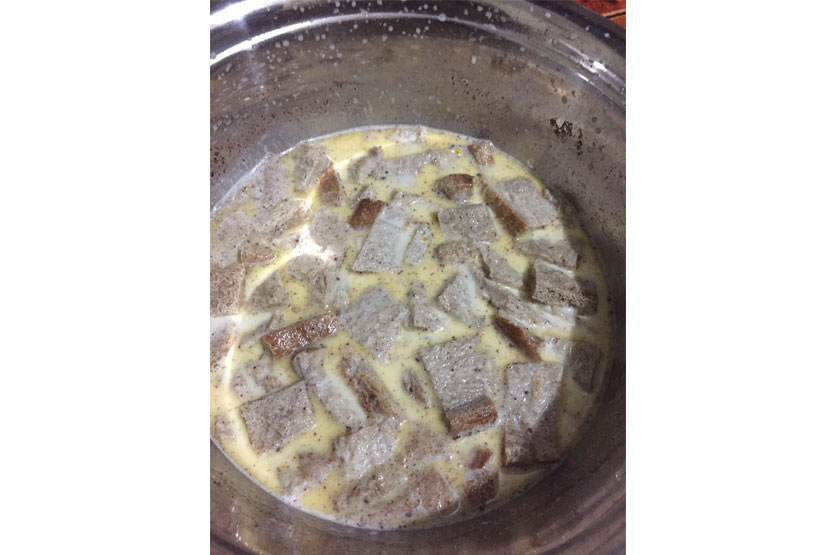 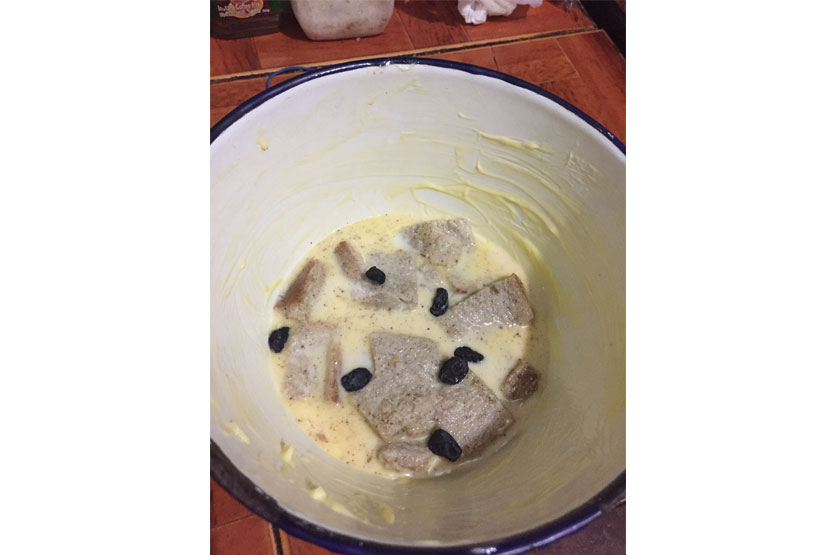 Take the prepared dish, and carefully add in the bread and milk mixture to it. In between the process, strategically place the raisins. Do not place the raisins right on top of the pudding.

Once all the bread and liquid have been transferred to the prepared dish, sprinkle brown sugar on top.

Place this dish in the oven and bake for 45 minutes. 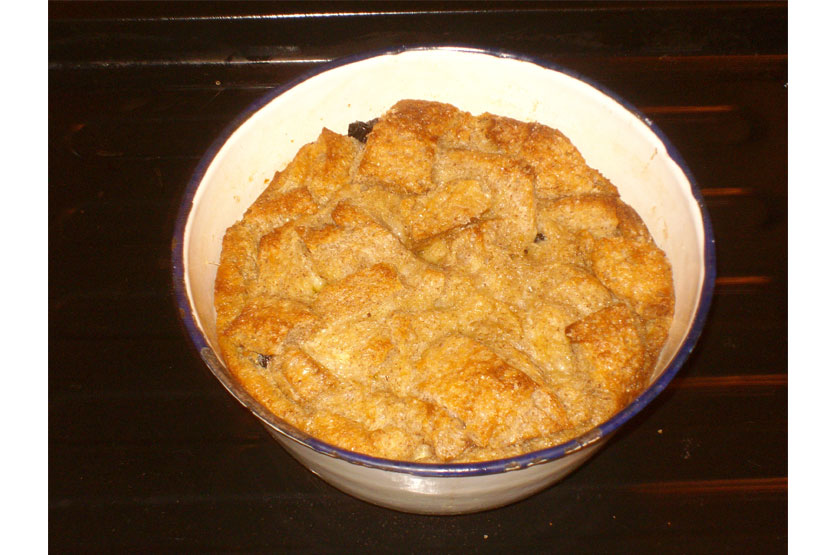 Once the pudding has baked, take it out of the oven and let it cool.

Place the icing sugar in a bowl. 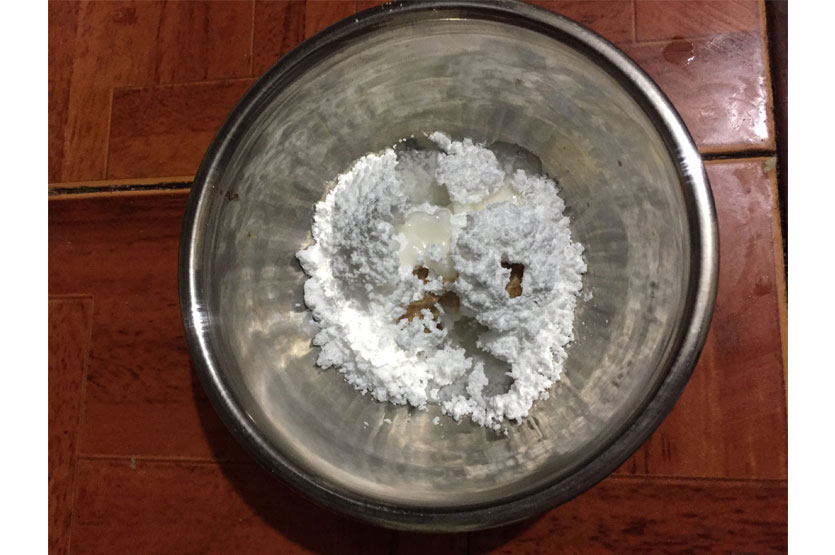 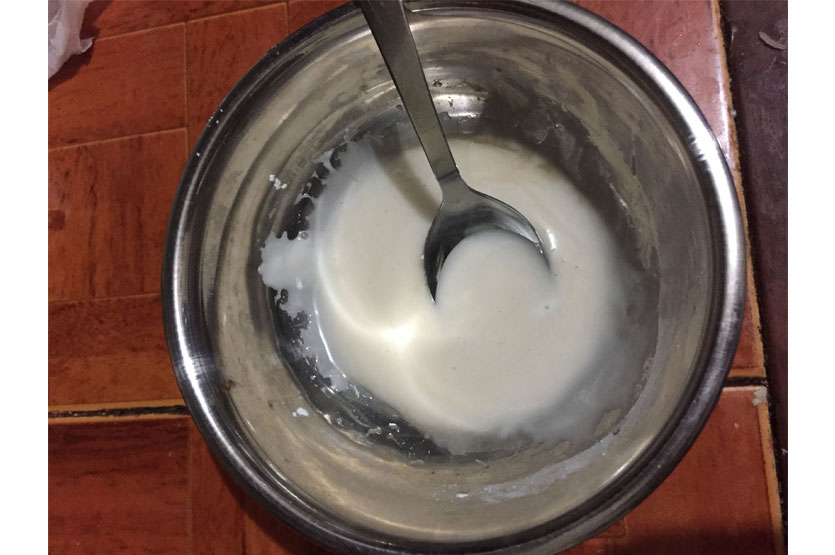 Add the hot water and vanilla icing to it. Stir until a thick liquid forms. 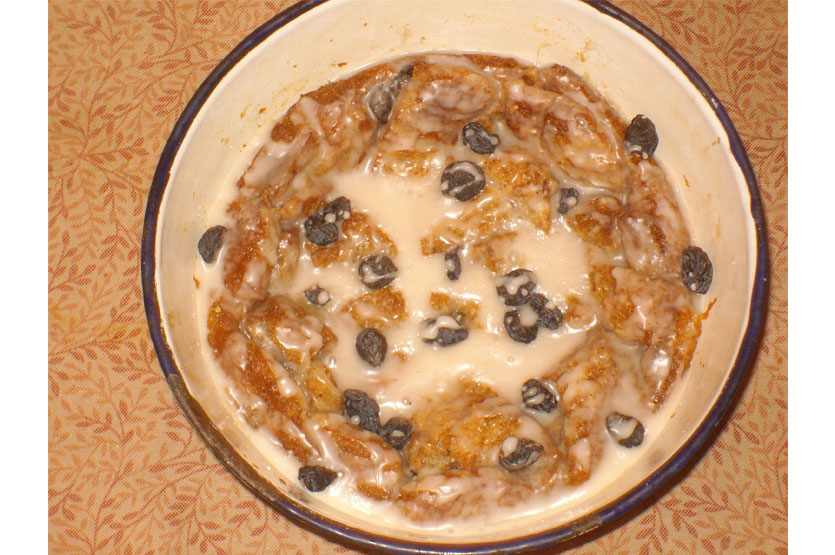 Drizzle the icing over the lukewarm pudding and leave it for ten minutes to set. 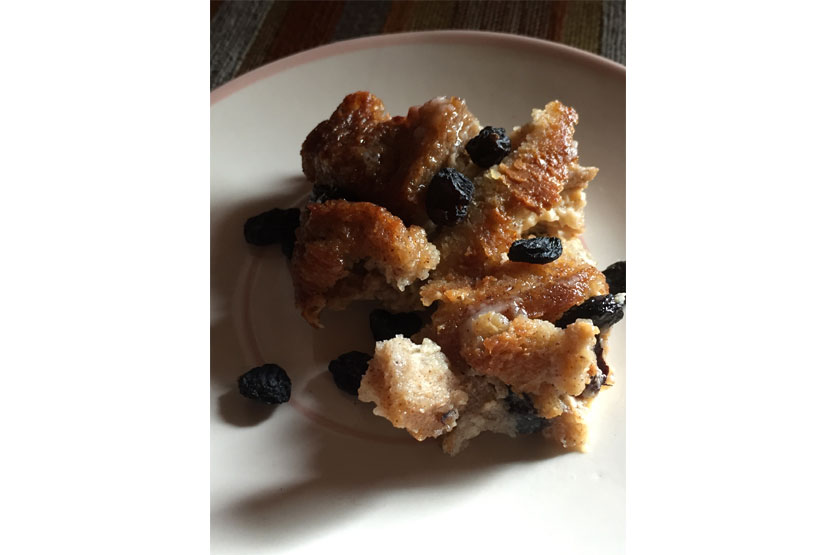 Serve and eat while it’s warm.

THIS Homemade Bread Pudding is really the food of the Gods.

Depending on the density of the pud, you might have to bake it for ten extra minutes.

It is important that you only melt the butter in the milk and not cook it.

Skip the icing for a healthier Bread Pud.

I recommend using brown sugar for the pudding. I would have, but I didn’t have much left in the house.

Do you know where I can find enamel bowls? I have this one which I treasure like life itself.

Ensure that you have filled the dish with all of the milk mixture.

Do not place raisins directly on top of the pudding - it will burn.

The recipe is sufficient to satisfy 5 - 6 Bread Pudding fans. 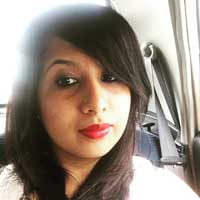 An eternal student of life - Your everyday home cook - Will break in to a jig when necessary - Scintillating subject matter under the alias of S.A Hamid - Coffeeholic. Follow on Twitter - TheStartupCook or Instagram - the_startup_cook