When Kutumbigala was discovered by Upasaka Maithree back in 1942, it was a largely uninhabited expanse of land following colonial invasions and was a kingdom of wild beasts. Back in the day, the people of Panama had the habit of going on pilgrimages during the months of Poson and Esala. Without going far, they visited nearby places of worship which were mostly habitats for bears, leopards and elephants. Amongst these sites were Kutumbigala, Bambaragastalawa, Kabeliththa, and Talagur Viharaya. Pilgrims have initially discovered Kutumbigala and had resided on rocks and caves before continuing their pilgrimage, often accompanied by ‘forest charmers’ who knew incantations, talismans, medicines and herbs, charms, and auspicious times.

Kutumbigala (now known as Kudumbigala) is a large expanse of forest cover and is home to over 200 drip-ledge caves, known as ‘kutis’ that provided shelter for Rishis and forest-dwelling monks of yesteryear. However, over 2300 years ago a monastic complex was established by King Devanampiya Tissa at this location but following colonial invasions, it was largely uninhabited. Although recent records claim that the Kudumbigala Monastery spans across 1028 acres, early records suggest that it was a 225,000 acre expanse of land!

Blessed with an abundance of greenery and encapsulated with rocky outcrops including the famous ‘spy rock’ now known as Balumgala, today, Kudumbigala is home to around 30 forest-dwelling monks who lead an isolated existence absorbed in meditation, in a quest to find the all-elusive inner peace. Having renounced austere comforts of a village temple these monks are now accustomed to leading a life with nature, coexisting with wild beasts.

A sense of calm and tranquillity took over our weariness as we entered the much-revered site. Having had a brief conversation with the chief monk we set foot along the pathway which has largely been developed for the comfort of pilgrims. Even though monks of yesteryear found comfort in caves, today, circumstances have changed and miniature cubicles with essential supplies such as electricity and water have been constructed for these monks.

As we walked towards the interior of the monastic complex, passing fresh elephant dung, our guide warned us to stay alert. We were told that the elephants dwelling inside the sanctuary are very much used to the monks. Any pilgrim or visitor would be awed by the natural formation of rocks coupled with various endemic, exotic, threatened, near threatened, and vulnerable species of flora and fauna. Records of medicinal plants with many therapeutic properties from Heen Tambala to Murutala, Athdaha, Tarana, Iramusu, Heen Habara, Kalukamberiya, and many others have been mentioned in Ven. Thambugala Anandasiri Thera’s book titled ‘Twenty five years of Life in the Jungle’. Having resided in the jungle since 1954, Ven. Anandasiri thera was known for his conversations with animals and how he coexisted with wild beasts. His experience in the jungle gives insights into how Buddha’s teachings dispelled superstitions and beliefs. The reader is given a thorough understanding of how the mind needs to be controlled in various instances, be it an encounter with a wild animal or illusions that he has witnessed while meditating. He disseminated his knowledge to fellow monks and lay devotees who visited him.

Before leaving the premises we had an urge to climb the spy rock and catch a glimpse of the serene vistas that surrounded us. As we neared the rocky outcrop, at first we thought it would be impossible as it was an unusually steep ascent. But the group was determined to continue and we set foot. As we climbed with occasional supports that have been put up, especially for elderly visitors and pilgrims we conversed on the fact that elephants should never be ascending these rocks. But it didn’t even take two minutes for us to spot drying elephant dung halfway through our ascent.

Despite their heavy build, they are equipped with the balance and posture to climb the rock and feed on Ahatu leaves at the summit. Today, the ruins of an ancient chaitya, popularly known as Akasa Chaitya sit strong amidst a heavy gush of winds coming from all directions. One could barely walk or stand at the summit, but the surrounding views are truly breathtaking.

A day in Kumana
Located towards the interior of the Kumana National Park is Bambaragastalawa known for its 24-foot long reclining Buddha statue. The initial statue was said to have been built in the tradition of the Anuradhapura era but it had been destroyed by treasure hunters. The site was later restored by the Department of Archaeology and a new statue now takes shelter under this fascinating drip-ledge cave. The site got its name from Bambara (beehives) that were built on trees.

Those who wish to visit Bambaragastalawa should hire a jeep at Kumana National Park. Safari drivers would quote between Rs. 6000-8000 for this trip as it is a detour from the main sites at the Park. A popular attraction is spotting the Black Necked Stork which could only be seen at Kumana.Pilgrims also visit Kuda Kebeliththa via Kumana National Park and several other sites of religious and archaeological importance.

During our trip, our guide showed us two other spots namely, Nittaehela and Panikki Hela. Legend has it that back in the day, Kumana was inhabited by Vedda tribes as well as Nittaewo, little people with long claws that resembled pygmies. Legend has it that during one of the encounters the Veddas gathered all Nittaweo inside a cave and set fire to it, thus ending their generation. However this only remains to be a legend.

From Bambaragastalawa we descended and explored the serene vistas of the Kumana National Park, from tiny streamlets that run across the path to spotting an occasional buffalo, perhaps descendants of mud buffalos known as Madaya back in the day, herds of deer, a female sambur that elegantly posed for our photographs, two Brahmin kites dominating the airspace and a lone elephant that watched us.

It was their territory and we slowly headed back, cherishing the tales and legends of a bygone era. 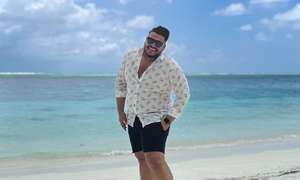 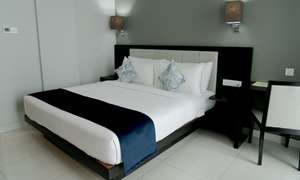 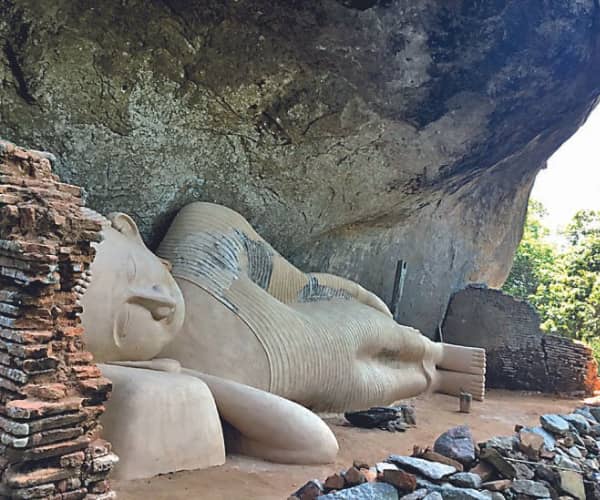 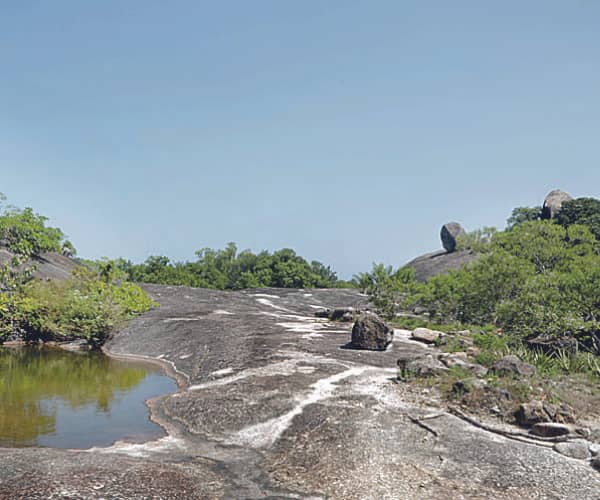 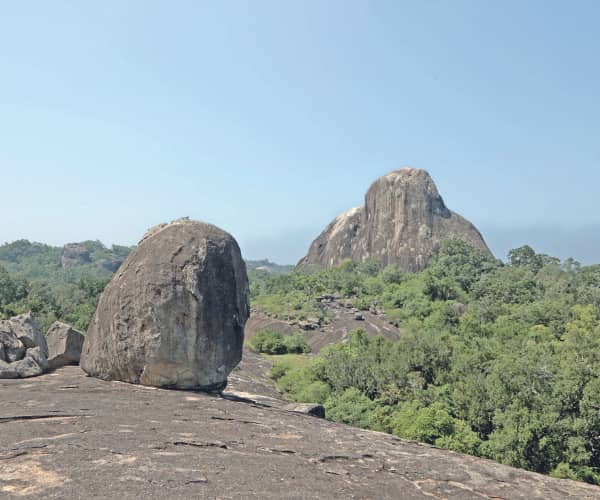