Air travel during a pandemic

Travelling during Covid-19 has completely sucked the joy out of travelling. Formerly a pleasurable experience, getting on an airplane is now fraught with anxiety and worry. When my son decided that he wanted to return to the UK to continue his education I was the parent that drew the short straw to accompany him back and settle him in. Since the advent of Covid-19 air travel has borne the brunt in the aviation and travel industry. What used to be a pleasurable indulgence has become utterly traumatic.  Preparing for the return trip to the UK was fraught with tension and saddled with bureaucracy. 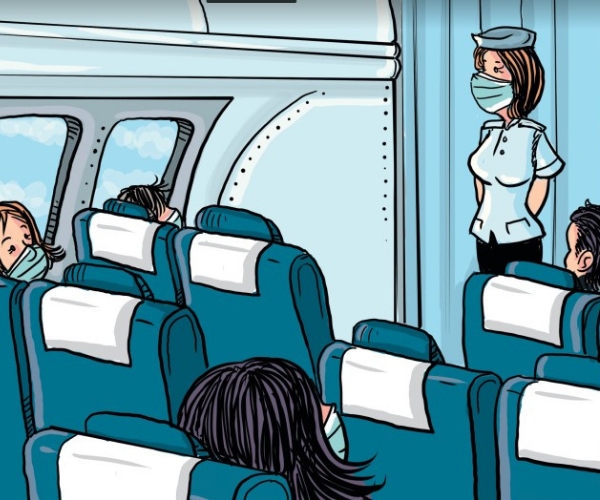 As the UK has deemed Sri Lanka a Red List country, the UK requires its returning residents and citizens from a Red List country to spend a mandatory ten days in hotel quarantine. This comes with an eyewateringly hefty price tag.  Booking the flight was easy but it was the online paperwork such as hotel booking and filling the passenger locator form which was tedious, especially if you are an older single traveller who is not internet savvy.
The BIA was like a ghost town, with only a few passengers and a handful of people milling around unlike days of yore when the airport was teeming with people. The check-in process was quick and simple and immigration was manned by only two immigration officers as there were only a few passengers.

The duty-free area with many stores was boarded up or shut down. The handful of shops that remained open hardly had any customers. Many of whom I spoke to said they don’t have many sales and on some days they don’t make a single sale.

There were no more than 70 passengers on our flight which made boarding a painless exercise. With such few passengers, I felt like I was on a private jet albeit sans the luxuries. The crew were masked up and the passengers too were expected to be masked during the flight. We were happy to do this especially when we heard various sounds of coughing from all around the cabin. The service was sparse.

We were given a one-litre bottle of water to be kept with us for the duration of the flight. During the eleven-hour flight, we were given two meals.  Requests for tea or coffee were refused for operational reasons I was told. However, when I sent my son to the galley to ask for a cup of tea they had said that although they don’t serve tea they had a few spare cups so they would give a cup. No pillows and blankets were offered either and when requested the crew said they are not available again due to operational reasons.

The passengers’ seating was socially distanced with many seats vacant in the middle rows. A smattering of passengers shifted to those seats to stretch out and sleep, a rather difficult task in the absence of a pillow or a blanket!

Upon arriving in the UK we were all herded onto a bus and transported to terminal 4 where we went through immigration and customs before our hotel documents were checked and told which bus to board. This procedure took just over an hour. The circuitous bus ride to the various hotels did worry me as there were many passengers in our bus with many of them sneezing and coughing with gay abandon with their masks slung like hammocks under their chins!

During the ride, it was discovered that one elderly Sri Lankan had got on our bus by mistake so we had to make a detour back to the airport to drop him off. This detour resulted in us being dropped almost two hours after we first boarded the bus. Once at the hotel we had to fill out copious amounts of documentation including selecting ten days worth of meals without even trying a single meal. There were Western, Asian, and vegetarian choices and those with special dietary requirements were also catered for accordingly. Ticking off the many lunches, breakfasts and dinners I left it in the hands of the Gods to ensure we had decent meals. Our meals which were not of gourmet standard but average was delivered with clockwork precision and contained bottles of water, fruit, yoghurt and cake.

The room was adequate for the two of us and was furnished with a TV, AC, fridge, kettle, hairdryer, toiletries and tea and coffee sachets.  We were allowed two walks a day but when I looked out through the sealed windows of my room I saw that many people were walking around without masks.

The corridor has a security guard and even if you open the door of your room you are asked if there is a problem and to close the door immediately. There is even a security guard by the lift. The hotel compound was guarded by security 24 hours of the day, to ensure that those engaging in their daily constitutional would not make a break for freedom!

On the second day, we were handed two packages with our own do it yourself PCR tests. I was quite worried when I had to do my pre-travel PCR test in Sri Lanka and having to do my own one petrified me. The instructions were straightforward and for those who need visual stimulation, there was a link to an online video. I managed to do the PCR  on my son and also on myself which was actually not a bad experience. Once the PCR test was done it had to be packed up, serial numbers matched and handed back to the hotel security who would send it off for testing. You also have to go online and fill out more information ranging from your National Health Service Number to giving a UK mobile number and email address for the result to be sent. At this time I could not but help think about the old and infirm Sri Lankan couple on our flight and how they may have coped with doing the self PCR tests and filling the online forms. As they did not look smartphone savvy at all!

Sunday marked the eighth day and we had to do another self PCR test. Confined to a hotel room for ten days has been very trying and I often joked with my son that he should thank his lucky stars the cutlery is plastic!!!! If at all this prescribed incarceration has helped strengthen the mother and son bond!

My advice for those travelling is to take a few snacks for the plane journey and for the hotel stay. You are allowed to order food and snacks from local supermarkets and takeaways though. If you are an elderly traveller and do not have a smartphone or laptop then do bring some reading material and inform the hotel reception that you need help with the online form filling.

As the UK has deemed Sri Lanka a Red List country, the UK requires its returning residents and citizens from a Red List country to spend a mandatory ten days in hotel quarantine. This comes with an eyewateringly hefty price tag.

The corridor has a security guard and even if you open the door of your room you are asked if there is a problem and to close the door immediately. There is even a security guard by the lift. The hotel compound was guarded by security 24 hours of the day...