The Kingdom of Ruhuna comprised the Southern and Eastern provinces and took on different roles in the history of Sri Lanka. Ruhuna is known to be the place that provided refuge for Sinhala Kings, mostly as a defensive territory to organise armies while in hiding and battle. This is evident with its abundance of greenery and unique locations chosen by successive rulers to strengthen their power. The names of Mahanaga, fondly known as the Prince of Ruhuna and King Kavan Tissa, who did a tremendous service to unite the nation continue to be appreciated by archaeologists and historians to date.

During a recent visit to Pottuvil, which is home to an abundance of archaeology sites, the Daily Mirror Life visited some important places steeped in history. Today, these sites come under the purview of the Department of Archaeology and during our visit, Lahugala Archaeology Department Officer W. D. Indika Prasad Kumara guided us on our journey.

The Magul Vihara is said to be a Pabbatarama Vihara complex but this has been contested as there is no rocky outcrop close by to the temple. This was initially known as the Ruhunu Maha Viharaya, the main temple in the Ruhuna kingdom that spans across a 10-acre expanse of land. Although it was said to be constructed by King Dhatusena, legend has it that following Chola invasions, Viharamahadevi, a chief consort of two brother kings named Parakramabahu had restored the Vihara.

The Temple had been equipped with all facilities including fire houses (gini hal gewal), alms halls, bathing areas, ponds and people living around the temple had donated lands back in the day. Today, many lands in its surrounds have been acquired by private entities. The Mahavamsa states that the Ruhuna kingdom flourished to an extent that it provided food and necessities to the Anuradhapura kingdom. Many guard stones and architecture resembles the Polonnaruwa and Anuradhapura period. This could be because kings representing these kingdoms sponsored the construction of the Temple from time to time as a gesture of goodwill.

However, legend has it that it was at this temple that King Kavan Tissa and Princess Viharamahadevi got married. One of the reasons could be due to the uniquely designed circular Bodhigaraya which could only be seen at this temple premises. King Kavan Tissa did a great service to unite the nation. Despite myths and folklore, stone inscriptions found during excavations suggests that the temple was built by King Dhatusena during the 14th Century.

Another unique feature of this Temple is the moonstone that has been preserved with much care. Archaeology officials believe that this is the only moonstone in Asia that has a mahout on an elephant. Another interpretation is that it looks like a mahout is about to mount onto an elephant’s back. Some even say that it’s a monkey. Even back in the day people have offered stone slabs and other materials during the construction of the Temple as means of offering merit to their loved ones. Some inscriptions could still be seen to date.

Towards the interior of the Temple complex lies the chetiya with statues of the elephant, horse and cow in its outer wall. As you descend the steps towards the posterior of the Temple complex you will see two guard stones belonging to the Polonnaruwa period and remnants of another facility which is yet to be excavated. The rear entrance is said to be the main entrance from where people arrived back in the day as the Bodhigaraya then lies on to your left and the chetiya on to your right, as seen in a temple. A standing Buddha statue is now being conserved at the site.

Texts on certain stone inscriptions date back to the 9th and 10th Centuries.  The Temple was largely destroyed during Chola invasions and most of its treasure had been looted.

More excavations need to be done in the dense undergrowth in its surrounds and archaeology officials believe that more clues and evidence regarding the Temple are yet to be discovered.

Located 8.3km away from Magul Maha Viharaya is the giant Neelagiri Seya. Also known as the ‘Uttara Seevali Pabbata Viharaya’ this stupa is said to be the only stupa in Sri Lanka with the highest offering of carved footprints of the Buddha (Siripathul Gal). It is also the second-largest stupa in the Eastern Province built at a height of 72 feet with a circumference of 600 feet. Legend has it that the stupa was built by King Saddhatissa and King Dutugemunu prior to going to war. Another legend is that the stupa was built by a giant by the name Neelagiri, hence the name Neelagiri Seya.

One unique feature in its structure is that the spire comprised of circular rings (Chattra) and ruins of these structures are still found near the stupa. Large flower beds could be seen on either side of the stupa and this suggests that a large number of people visited the temple. The stupa is built on a rock so that it doesn’t sink in. Quartz and other types of stone were used in the construction of this stupa. Even though a large number of relics were found from excavations done so far, there’s much more excavation and restoration work to be done at the summit of the stupa.

Certain building blocks found during early excavations are being preserved at the site. One of them shows a footprint of a dog and another of a human, further proving the link between humans and dogs during yesteryear.

Situated along the Monaragala-Pottuvil main road are another ancient stupa and a temple complex that is undergoing renovations at present. Since it is shorter in height than other Chaityas it is known as ‘Kotavehera’ but people also call it ‘Deegalaka Viharaya’. Some even call it Akasa Chaitya.

Legend has it that during a previous birth King Dutugemunu was a samanera (novice monk) at this temple and the chaitya was built to commemorate his birth. This chaitya and the Temple complex belong to the Anuradhapura period. During the height of the war, this premises was used as a bunker and its remnants could still be seen to date. Relics discovered from Kotavehera now lie at the museum in Anuradhapura.

Several stone inscriptions written in late Brahmi text have been conserved at the site. One of them states that Sabaya, the Minister of King Gamini Abhaya (Gajaba) donated 100 karisas (a land measure at a time where one karisa is the equivalent of four dams)  of paddy land fed by the Digalaka Tank to the Digalaka Viharaya in the event of being exempted from his taxes. He has donated 10 more karisas to the construction of the chaitya and one karisa for the lighting of oil lamps.

Lying on the border of the Ampara and Moneragala districts is what is considered to be the longest drip-ledge cave in Asia. This 512 feet mammoth cave now comes under the purview of the Hulan Nuge Tharulengala Rajamaha Viharaya located on a 633 feet high rocky hill known as Karandahela. Located next to this cave is another 200 feet long cave, built similarly to the main cave and is believed to have served as a community quarter than an individual abode. The main temple site also includes a considerably smaller drip-ledge cave that houses a reclining Buddha statue.

Today this temple ground spans over 20  acres of thick jungle punctuated with remnants of old buildings and stone inscriptions which could be found along the way to the summit. One of these inscriptions states that a person named Asaya had bought the Gabidatatiri Tank and had offered it to the Bhikkus at Habuthagala Viharaya. A second inscription states that a female lay devotee has donated the Hamanavi Tank to the bhikkus of the Habutagala Viharaya. This tank had belonged to her.

This goes on to show that women too were involved in donating their possessions to the wellbeing of temples during yesteryear.

The township of Sasthrawela situated along the Panama-Pottuvil road is a tiny speck of habitation today. But legend has it that during the heyday of the Ruhuna Kingdom this was a location that attracted many scholars from far away kingdoms and even from India who came here to learn various disciplines from science to technology. According to folklore the name Sasthrawela is said to be derived from the word ‘Sasthraweiliya’ which indicates that the locality was associated with an institution of learning. However, an alternative school of thought is that it was here that the auspicious times were confirmed for the marriage of King Kavan Tissa and Princess Viharamahadevi, hence the name Sasthrawela.

A rock inscription at the entrance to the Temple states that a monastery named Nagapabbatha was built at Bodhigiriya by King Mahadathika Mahanaga, son of King Kutakanna Tissa and grandson of King Devanampiya Tissa, and was offered to monks coming from four directions. Income from Aganagama Wewa, Velamukha, Akamukaka and Hupikadaka were offered to monks at the monastery.

Ruins of the previous chaitya could still be seen to date even though it requires immediate restoration and conservation. An ancient cave complex with texts and artworks could be seen as you descend from the summit. Archaeology department officials have done their best to conserve these sites even amidst challenges. Monks at the temple also requested citizens to be more responsible when visiting the site as it needs to be preserved for future generations.

Already, the site has attracted treasure hunters and certain groups who have made attempts to vandalize these ancient, invaluable ruins. 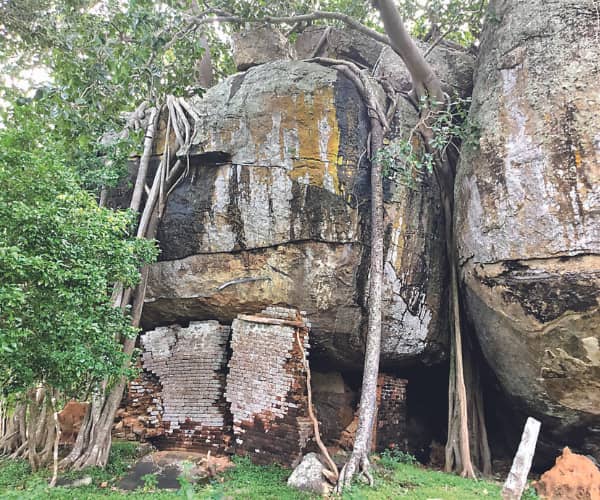 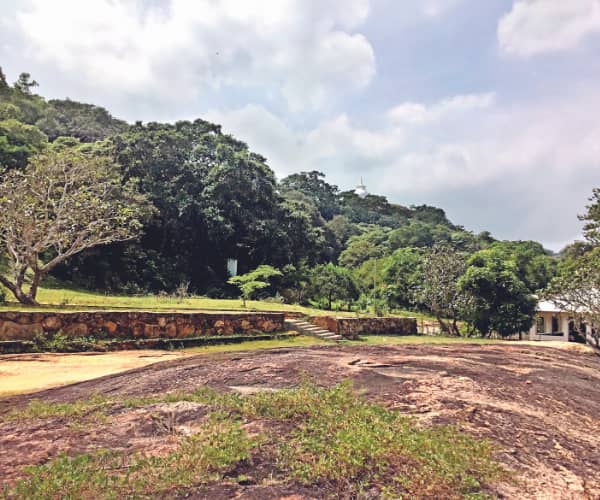 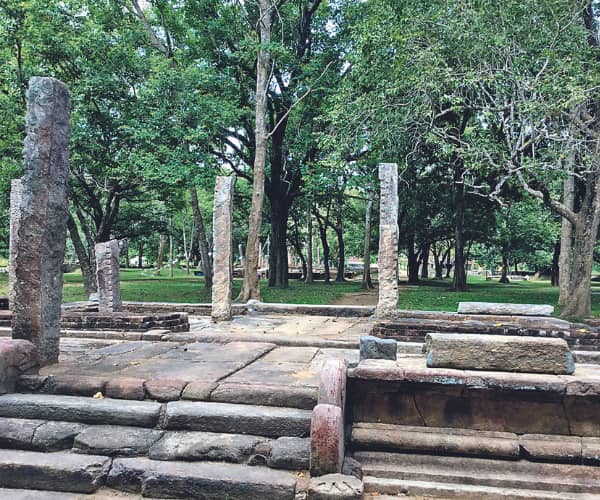 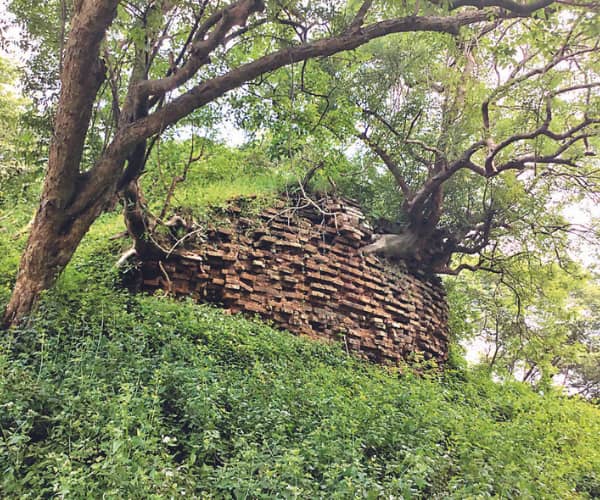 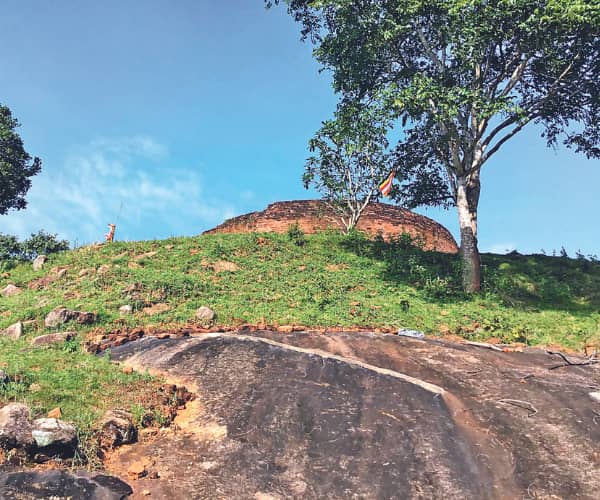