It’s the time of the year to think of a new resolution so why not learn the art of Sri-Lankan cooking! It may seem like a daunting task but it’s all about knowing your basics, so let’s start with spices!

Most might feel that Sri-Lankan cuisine is like Indian food (specially Kerala) but it has its own distinctive spin, there is an explosive, flavourful, fiery taste that burst in your mouth from the sweet caramelized onions, sharp pickles, tangy mallum (leafy greens mixed with coconut and sometimes sautéed in a pan) and the star of the meal, the heavily spiced yet light curries which make up a delectable feast every day!

Below are some staple spices you need to get your curry game on! 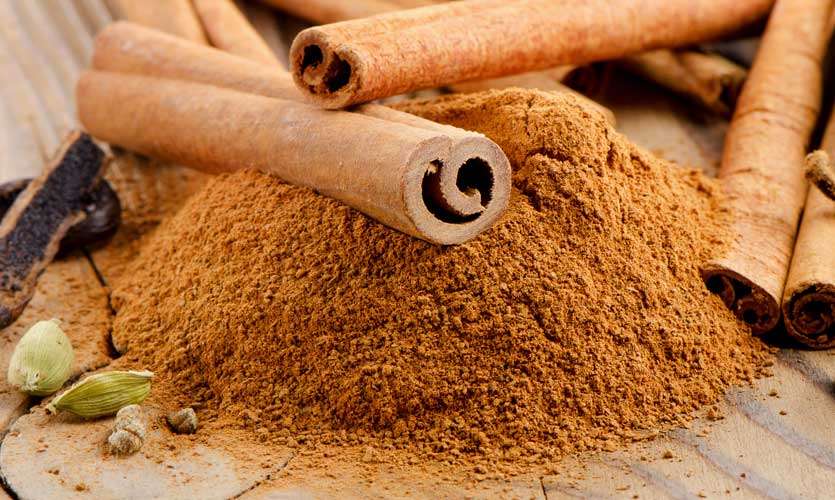 Our largest spice export and highly sort after “true cinnamon” in the global spice market (because of its sweeter taste), the Ceylon cinnamons’ history can be traced back to as early as 2000 BC, where Egyptians used it as perfume agent in the embalming process.

The cinnamon quills are made by scraping the inner bark of a mature cinnamon tree and then dried under the sunlight till it curls. Peeling the inner bark is a tedious task hence why it is rather expensive especially when compared to the cassia cinnamon from Indonesia.

Cinnamon can be added to meat or fish curries, yellow rice, veggie curries, tempered (Sautee in onions) potatoes, seeni sambol (Caramelized onions) to name a few, it adds a sweet yet sharp, spicy flavour and not to mention its strong aroma, which gives off a very warm feeling. It’s also a great addition to desserts like sago pudding.

Widely referred to as the “king of spice” it holds the largest percentage in the global spice market as it is the most widely used spice around the world, Black pepper is obtained by drying unripe drupes of the Piper nigrum woody wine. 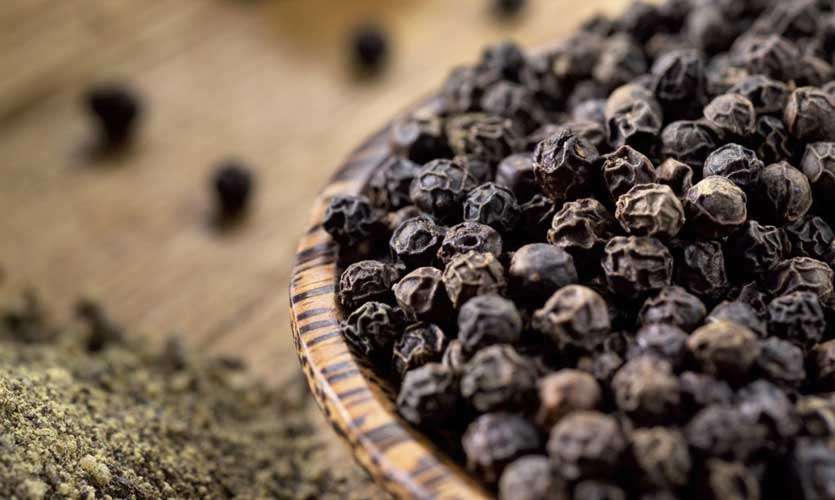 Although Vietnam dominates the pepper market, The Sri-Lankan pepper is well known for its superior quality with its higher piperine content which give it it’s a sharper pungency and spice. 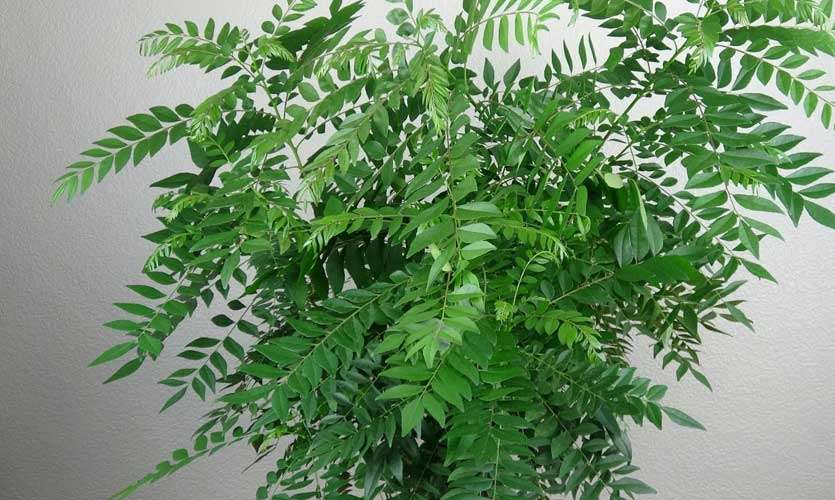 A Karapincha tree can be found in most Sri-Lankan gardens, the leaves are fragrant and completely lifts the flavor of the dish, it is best to temper (fry in hot oil) the leaves right before adding the main ingredients to release the flavour.

Fresh leaves are your best option as it holds the flavour rather than dried ones, So have a plant in your garden or in a pot on your balcony. 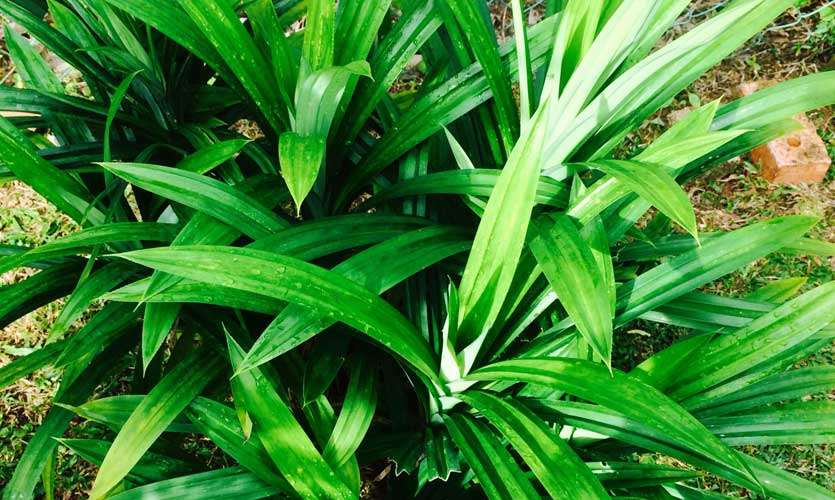 Rampe is a blade-like leaf of a fragrant screwpine plant variety, cutting them in small pieces and lightly bruising them before adding it any curry or tempered dish helps release the strong fragrance that takes over your entire kitchen, plain old rice can also be elevated by adding rampe leaf, do remember to remove them after the cooking is done or else it will leave a bitter taste. 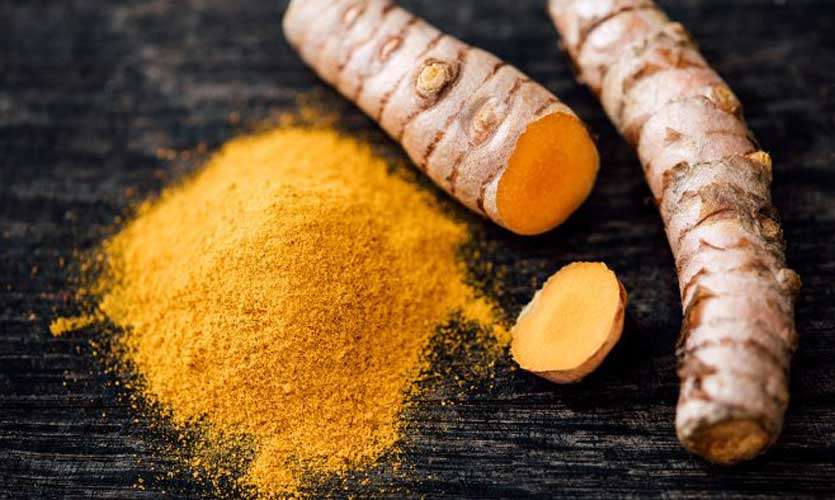 Known as the “queen of spices”, it’s made from the root of a plant from the ginger family. Once matured, its dried till its brittle and ground up into a fine powder.

Use it in any curry you wish, not just yellow curries like dhal or potato, it really enhances the colour of blackish-brownish and reddish curries like chicken curry or a reddish halmasso (sprat) curry. Add a dash of it to tempered dishes to give a pleasing colour.

People also use it as a cheaper alternative to saffron (for colour only NOT taste) but be warned do not over do it, adding too much can leave your curry extremely bitter. 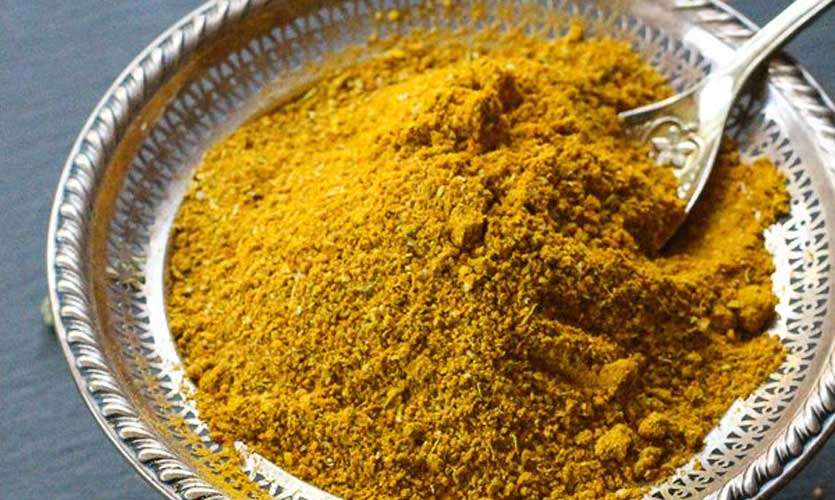 Thunapaha literally means three five, meaning there can be three to five spices, Ingredients used can differ from household to household but the main ingredients used are coriander, fennel and cumin seeds, you can add a bit of cinnamon, cardamom or even roasted Karapincha to enhance and deepen the earthy, sweet and warm flavour. 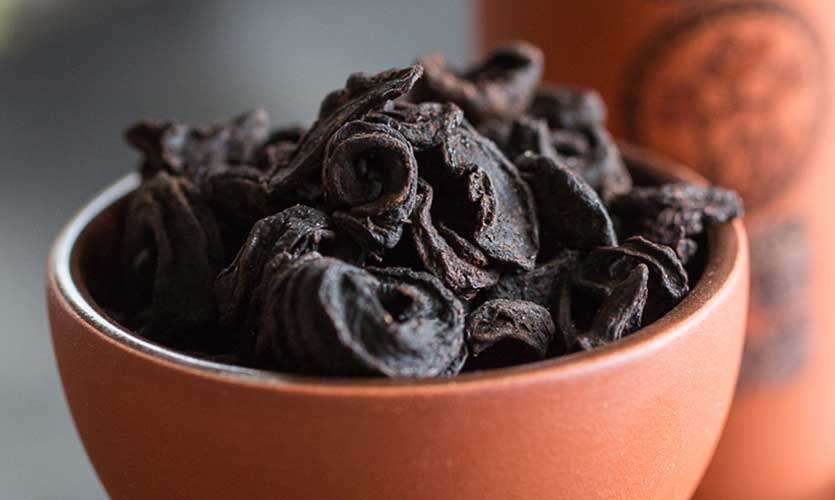 The Goraka tree bears the Goraka fruit that has deep set vertical lobes and looks like a mini pumpkin, once its ripe, the inner fruit that sort of look like reddish mangosteen, is separated and dried until its black and shriveled.

It’s mainly used to tenderize meat like pork, beef and chicken. It’s also added to pollos dishes to soften the flesh. Goraka has a very potent sour taste so use sparingly! It also prolongs the longevity of the curry when it is added. 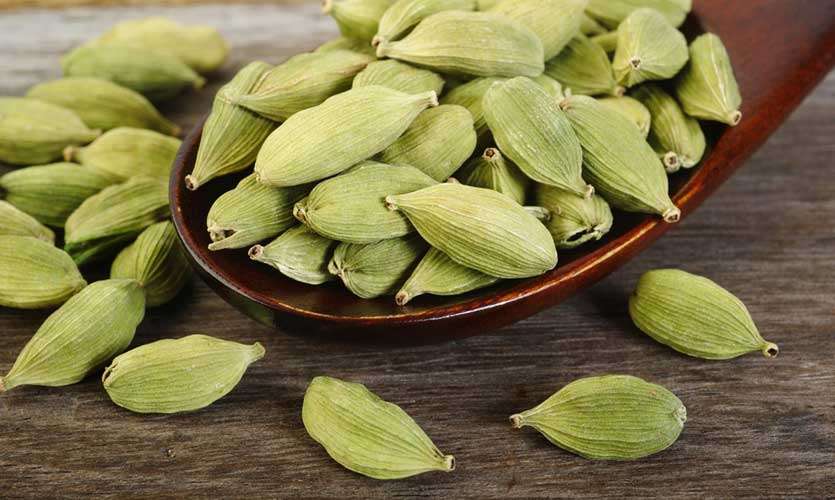 The cardamom is a perennial plant that belongs to the ginger family, what we use are the mature pods which is eventually harvest and dried.

It has a sweet, pungent and aromatic flavor that comes from the seeds inside, you can have a stronger flavour when you grind the pods.

It is mainly used to flavour yellow rice, chicken, beef or pork curries. You can also add it to desserts like Watalappam, coconut cake and sago pudding. Add it to your tea or coffee to give it a nice spicy jolt that will refresh you. 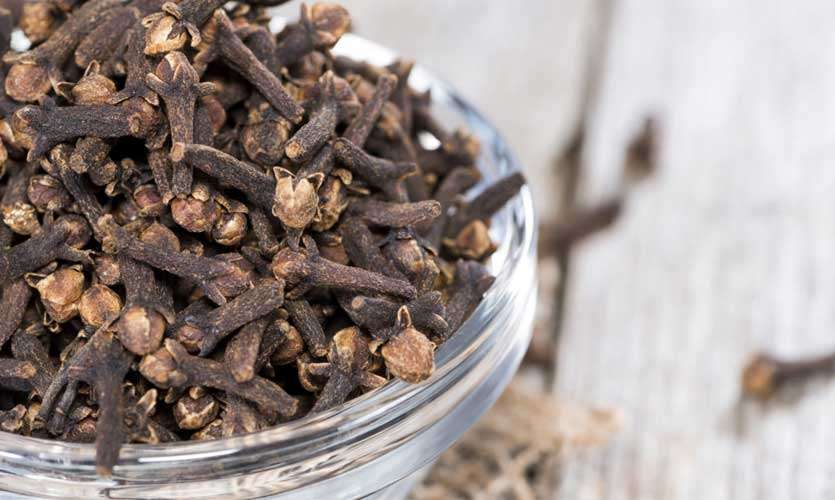 Cloves are the mature dried unopen flower of the clove tree, the taste and aroma of cloves are extremely intense and spicy! there is an astringent quality to it and has strong, pungent and sweet flavour with a hint of bitterness, they also have distinct warmth and almost hot in nature. 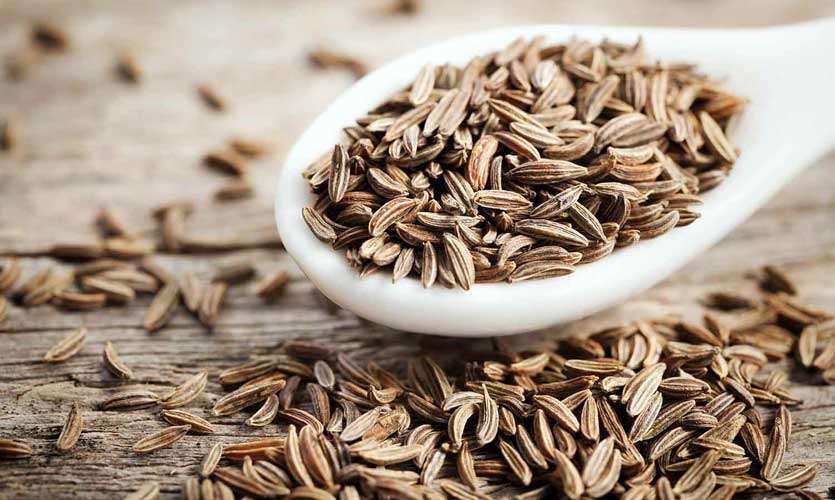 The cumin seed is taken from a plant that belongs to the parsley family. It has a sweet and spicy flavour and adds a warm, earthy flavour to the curry, to really enhance the flavour of cumin it is best to roast or temper it before adding the other ingredients.

it works wonders with vegetable curries like beetroot, beans and pumpkin and is also works well with meat dishes and vegetable soups too! 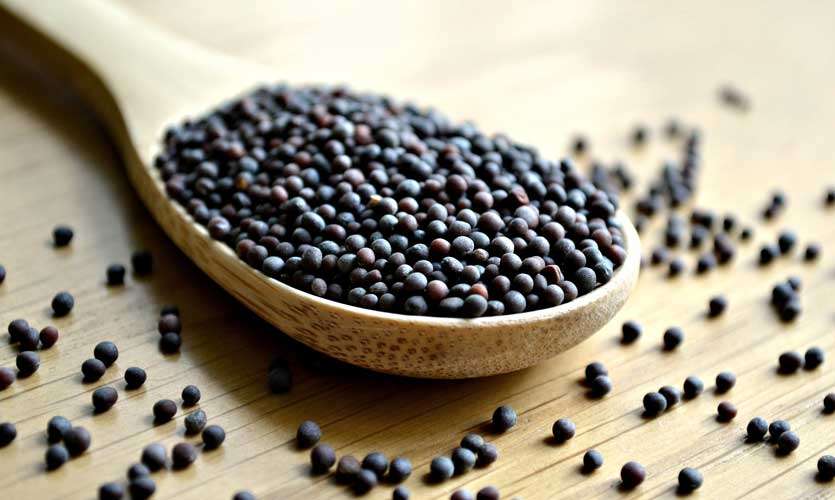 These tiny seeds go “pop” in hot oil or when you roast it, this gives off a pungent aroma and hot flavour. Excellent when added to beans, beetroot and cabbage curry and used in pickles and meat dishes as well.

The cuboid-shaped amber coloured seeds have a sweet, nutty flavour with a slight bitterness to it, roasting these alone or with Karapincha can uplift the flavour tremendously.

Fenugreek can be added to mildly flavored coconut milk based curries (what we call kiri hodi) or even meat and fish dishes, but beware, overloading this can give an extremely bitter taste to the curry and when biting into the seed does not give a pleasant taste, so use sparingly and its best to grind it whenever possible, 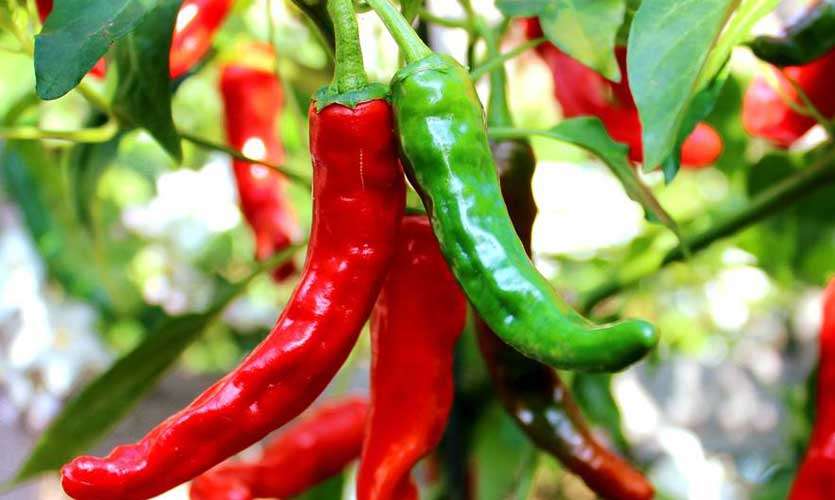 Sri-Lanka is home to a variety chilis its mind boggling, Amu miris (green chilli), nai miris (bird chilli) and kochchi to name a very few, each unique in colour, shape, size and hotness.

These give varying levels of fresh, spicy tones to your curry, you can also whip up some ear busting sambols especially using kochchi or make a zesty sauce out of nai miris or green chilis with be a great accompaniment to fish cutlets,

A fashion designer by profession with a flair for all things related to food and lifestyle. She is also an adrenaline junkie, animal lover, vegetarian and island girl through and through.