Many countries around the world have taken steps to legalise cannabis (also called weed or marijuana). This is either for medicinal or recreational purposes. In 2013 Uruguay made headlines as the first country to legalise the recreational use of cannabis. A total of 35 states in the US have legalised cannabis for medicinal purposes and 16 of them allow adults to use cannabis for recreational purposes. By 2018 Canada, Georgia and South Africa joined the club in legalising this plant. But in Sri Lanka (and many other countries), the plant remains to be banned despite discussions by the incumbent and previous regime on legalising cannabis. It is in this backdrop that Dr. Wasantha Sena Weliange (PhD in Natural Sciences) has been in the forefront in breaking the taboo on this plant species. As a result, he has taken many progressive steps to spread awareness on the uses of this plant and the economic benefits that could be reaped, if it is legalised in Sri Lanka. 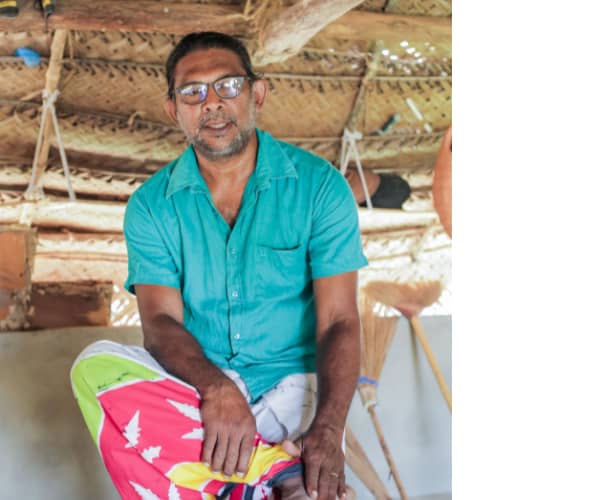 A plant with a history
The Cannabis Plant (also known as hemp or in informal terms weed) is believed to have been discovered around 50 million years ago along the Altai Mountain range spanning across Central and East Asia. Prior to the discovery of Cannabis, documented evidence reveals that the plant species Cannabinasia had similar features and properties to that of Cannabis. However, the plants evolved, dispersed with water and moved along rivers and waterways. One of the features of the Cannabis plant is that it doesn’t disperse via animals but only through water. Around two million years ago, Homo sapiens were born in Africa. They moved along the River Nile, setup civilisations near the Mediterranean Sea, and moved via Arabian countries towards Mesopotamia, moving upwards along River Saraswathi towards Himalayas, formed civilisations, and around this time they moved towards Sri Lanka as well.

Exploring its uses
“Early humans who left Africa reached Sri Lanka around 65,000 years ago,” said Dr. Weliange in an interview with the Daily Mirror. “Around this time there were people in India as well.

Some people who left India went to China and came across this unique area in Altai mountains that had a special type of plant. They were curious to know what it was as its leaf was divided into five parts and it was found in various sizes. Then they got familiar with its odour, checked if it was edible and when consumed they knew they felt different. They realised that they get a new kind of energy and domestic use commenced. While growing it domestically they did asexual reproduction. People found that the seeds and the fragrant flower were edible. They found out that there was oil in the seeds, they made use of its bark and started weaving. They used the bark to make tents, made porridge out of its seeds and they also found out that the smoke emanated when burning this plant was recreational.”

‘Thriloka’ discovered in Sri Lankan texts
Archaeological evidence relating to the inhalation of this smoke was discovered in countries including China. Cannabis was found in graves of popular people buried over 2500-3000 years ago. Excavators found pots and various utensils believed to have been developed to use cannabis. They also found various types of stones that were used for heating purposes. As such the uses of cannabis were manifold and this knowledge was spread all over the world from India to China via the silk route to Germany, Rome, Greece and even Africa. Dr. Weliange further said that among those who settled in the Himalayas was an individual called Maha Brahma, an intellectual among the tribe. “By this time people have started producing medicine derived from Cannabis.

Maha Brahma had 21 sons and eight of them were quite intellectual. One of them was Pulasthi who suggested that the eight of them should be sent for diplomatic service to countries around the Himalayas. Pulasthi ended up in Sri Lanka and disseminated the knowledge about cannabis to Naga and Yakka tribes who inhabited our land around 6000-7000 years ago. It is said that Ravana was a grandson of Pulasthi and he had a wealth of knowledge on indigenous medicine. He wrote on Ola leaves and discovered the name ‘thriloka’. Later on, King Buddhadasa’s ‘Sarartha Sangrahaya’ also refers to the use of Cannabis for medicinal purposes.”

Banned for good
During the 18th and 19th Centuries the opium trade was flourishing in the West. By this time the Portuguese thought they could gain profits by importing opium grown in India and China. But they were also aware of the uses of Cannabis. “There were around 34 different medical concoctions and medicinal balls derived from Cannabis. We also imported Cannabis from India since the THC components in these plants were high. But the Portuguese introduced opium to the rest of the world. It was initially discovered in Afghanistan which was later introduced to India and then to China and subsequently to Sri Lanka. They introduced it as a painkiller and replaced it for cannabis. This was the first interference against cannabis. Their intention was to introduce a synthetic drug in place of cannabis and in 1961 the United Nations announced that cannabis is a dangerous drug. In turn it was banned in Sri Lanka as well.

As per the existing law it is illegal to grow, consume, transport and sell cannabis in this country.” Certain countries have legalised the use of cannabis but with certain limitations. In Jamaica for instance, a country that has long been associated with cannabis and reggae music, decriminalised the possession of small amounts of cannabis in 2015. Individuals are allowed to grow up to five plants and smoking is legal only in licensed dispensaries and private residences.

An economically beneficial plant
But apart from its recreational properties, this plant comprises many other properties that are economically beneficial. “The root has medicinal value, the fibre could be used to make fabrics and weave clothes. The bark is used for tents and now it’s being crushed to make plywood, floorboard, composite boards. The fibre is also used to make paper, the seeds produce oil and this oil is used to make cosmetics. Seeds are used to produce flour. The THC and CBD components are used in medicine and in various food items,” Dr. Weliange emphasised.
“The products that are being produced from this plant could help retain the money used for importing similar products. It could help boost the economy as well. There are investors interested in our cannabis but many of them have been turned down. Instead, they have gone to Africa and by growing cannabis they are trying to end hunger in this continent. This shows our people are still living in a pit. We can express our knowledge but that’s about it. Many people in the country don’t know about its uses. Most countries have progressed in terms of research in this area. Even though we have literacy we haven’t made use of it,” he added.

An immunity booster?
Certain research studies have also mentioned immuno-regulating properties of cannabis. It is said that cannabis is a potent immunological agent that boosts cytokine responses, thereby ensuring a healthy immune function.  “By the time of the pandemic many states in US, Europe and Canada took steps to legalise cannabis. But despite research studies and traditional knowledge about cannabis, local practitioners have spoken against its uses,” he said.

Addiction and criticisms
However, since Cannabis is mostly consumed in the local context, many have also raised concerns about its addictive nature. But Dr. Weliange reiterated that it has been scientifically proven that cannabis doesn’t make one addicted to it. “It is not dangerous either. It is a medicine. Basically, people can get addicted to milk powder. This is why countries such as Canada, Australia, New Zealand, Italy openly purchase cannabis. These products have legal protection because it is better than any other drug. But there’s something called chronic use which is the prolonged consumption of cannabis over a long period of time. However, it is a known fact that you cannot consume cannabis in large quantities for a long period of time. Cannabis contains CBD which can control the reactions of THC. Our body possesses a chemical factory and when THC and CBD mixes, these chemicals modulate the reactions.

There are people who are addicted to cigarettes and would finish boxes. But they cannot consume cannabis this way. Cannabis doesn’t have nicotine or any other chemicals. On the contrary, a cigarette contains around 7000 chemicals.”

Dr. Weliange’s mission to legalise cannabis has been criticised on various fronts. “These criticisms mainly were from psychiatrists working with psychologically challenged persons. Some of these patients have a record of substance abuse and cannabis is one of them. Drugs such as heroin and cocaine have possibilities of affecting one’s mental health but there’s no evidence to prove that cannabis could have a direct impact on mental health. But they continue to highlight cannabis as one of the causes.”

A vision for Sri Lanka
In 2017 Dr. Weliange published a book titled ‘Thrilokyavijaya’ that includes a detailed account of the evolution of the plant. “In 2020 we launched another publication on Sri Lanka’s cannabis policy. We have brought down around 200 items that are produced or derived from cannabis and have plans to display these in a museum that will be established in Thanamalwila. We want to research on cannabis variants by growing seeds and examine the THC and CBD components. We have sought approval to legalise cannabis and have written to various ministers and stakeholder ministers. Sri Lankans have conveniently accepted lies that are being spread and have chosen it over the truth. People’s attitudes cannot be changed. However, amidst challenges we are on a mission to spread awareness about this plant. This is the best scientific work I can give to all Sri Lankans,” he said in his concluding remarks.

This article is a point of view and is NOT a promotion of any product and has been published for information purposes only.