The cultural capital of Myanmar

Considered the second largest city in Myanmar aka Burma, Mandalay is also considered the cultural capital of a country that is steeped in time and history. Countless pagodas which bear testimony to the country's Buddhist heritage, teahouses, abundance of monasteries, and temples all offer living examples of Bamar culture and is a treasure trove of sights and sounds especially for tourists. This is the penultimate article on Burma which highlights the rich cultural heritage of Mandalay, a city that is both magical and mystical.

My earliest memories of Mandalay are from Rudyard Kipling's poem Mandaly, and true to form the imagery which I had as a child was played out in real life as an adult during my trip to this city which has great scenic beauty which I witnessed during a drive to Mahagandaryone Monastery where we passed rice fields, temples, roadside stalls and seemingly hundreds of monks armed with their bowls engaged in pindapatha.

In Myanmar every male becomes a novice monk around the age of 9, before taking formal vows at the age of 19, although they are free to leave at anytime. While travelling to the monastery we witnessed a procession of elaborately dressed children on horseback making their way to a temple they were entering monkhood. We hastily changed our plans and followed them to the temple where we saw them being handed over to the priests by their parents. Some went quietly, while some had tears in their eyes. I had tears in mine. At the Mahagandayone Monastery we witnessed over 1300 priests lined up two abreast with their heads bowed low and bowls in their arms as they stood silently in a long line. It was a sea of brown robes wherever you looked. We had taken small gifts along with us like stationery and we silently placed them in their bowls. Others too made similar offerings. In unison they made their way into a vast dining hall where they had their one meal of the day. Fish, chicken, pork, rice and a variety of vegetables were served as they ate in silence and returned back to their quarters to engage in study. 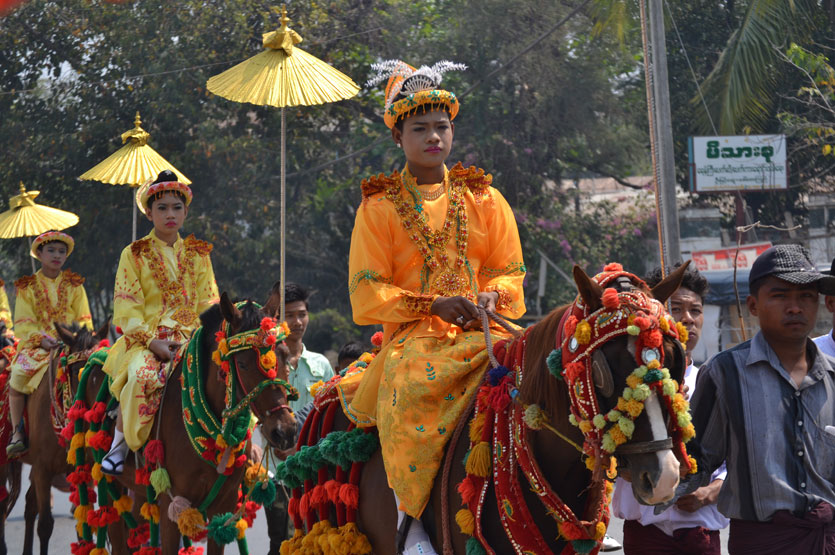 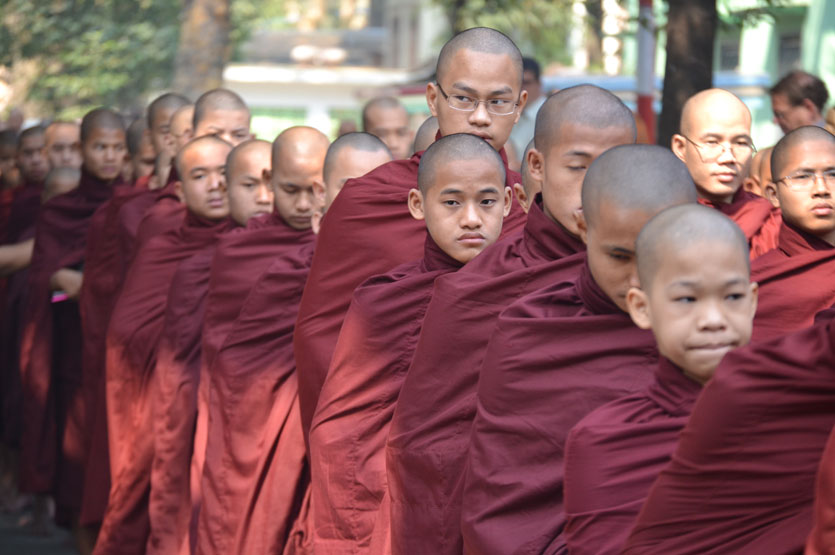 Another great site to visit is the Kuthodaw Pagoda which has 729 miniature shrines each with its own concrete slab inscribed with stanzas of the Tripitakaya the Buddhist holy scriptures. This place is also referred to as the world's biggest book. The slabs are inscribed with texts of the Sutta Pitaka, the Vinaya Pitaka and Abhidhamma Pitaka, the three parts that make up the Tripitaka, the teachings of the Buddha written in ancient Pali language. King Mindon ordered the “book” to be made. The works started in 1860 and took 8 years to complete. The texts were copied from ancient manuscripts written on dried palm leaf, the letters chiselled out of the stone and inlaid with gold leaf. Each marble slab measuring 153 centimeters tall and 107 centimeters wide is enshrined in a structure called Dhamma ceti or kyauksa gu in Burmese, “gu” meaning cave. The white shrines are lined in rows around the complex, with corridors in between wide enough to walk through. Each Dhamma ceti houses a single slab behind openable gates. The shrines have an entrance on all four sides with elaborately decorated arches over them and are topped with a hti, an ornamental spire. One more slab (no 730) tells the story of how the world’s largest book came about. 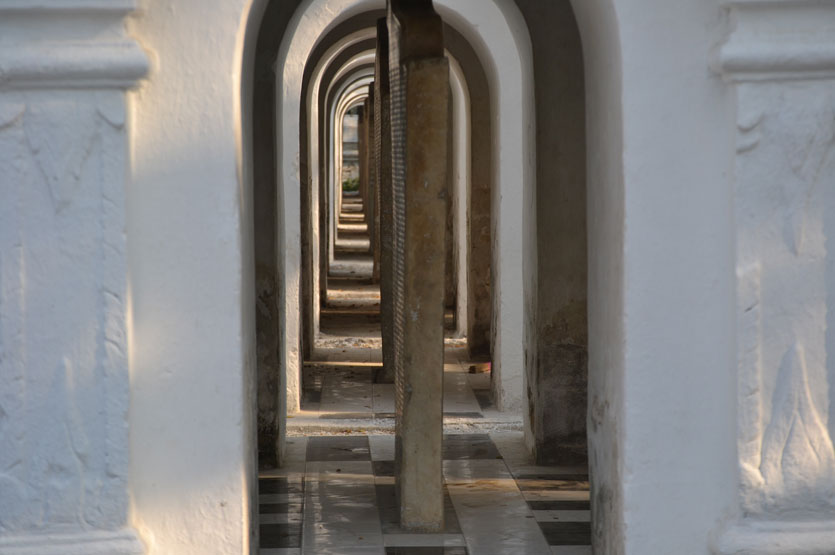 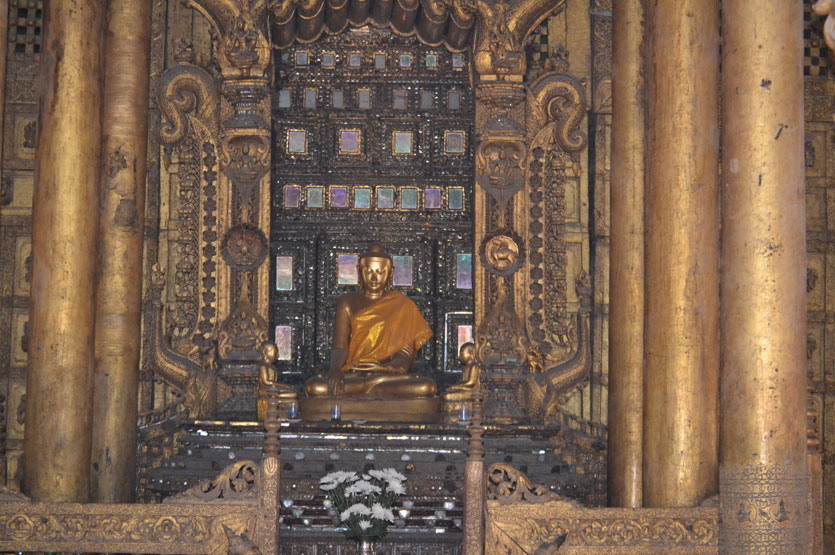 Central to this complex is a gilded pagoda measuring 57 meters in height. The pagoda was built in 1859, modelled on the Shwezigon Pagoda in Bagan. On top of a pole in front of the pagoda is a Galon (Garuda, a bird from Buddhist and Hindu mythology) grabbing a Naga serpent. Next to the pagoda is a small elegant open pavilion housing a Buddha image in the “Calling the Earth to witness” posture, seated on an elaborate pedestal.

Another site worth visiting is the Ubein Bridge which is the longest teak bridge in the world. Visit it at sunset and you will not be disappointed as you see the entire bridge bathed in an orange glow. 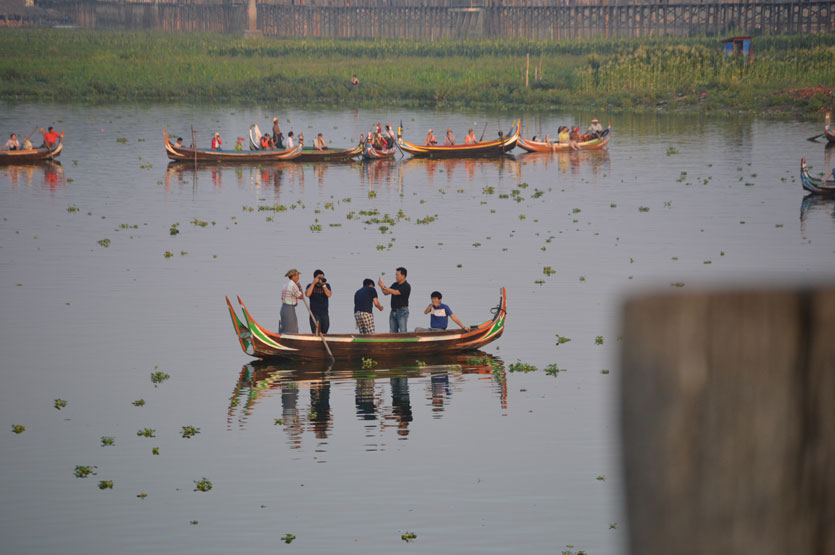 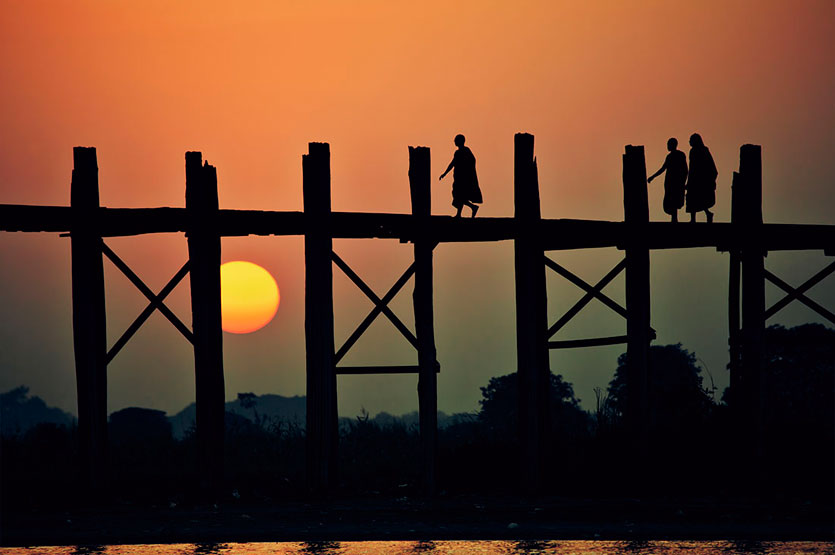 Also of importance is the Shwe-nandaw Kyaung which dates to the nineteenth century and served as the northern chamber of Mandalay’s Glass Palace. Built by King Mindon, this building is of great historic importance as it is the only apartment of the former royal palace that survived the extensive bombing of Mandalay during World War II. The chamber was later moved to its current location and refurbished as a monastery by King Mindon’s son, King Thibaw. It features extensive woodcarvings that are almost unrivalled in their intricacy, and a unique gilded interior. Teak wood monasteries are a ubiquitous feature of Myanmar’s landscape, and an important aspect of the country’s cultural heritage. Shwe-nandaw Kyaung is particularly significant because it is considered one of the most beautiful monasteries in Myanmar and is also one of the most highly visited. 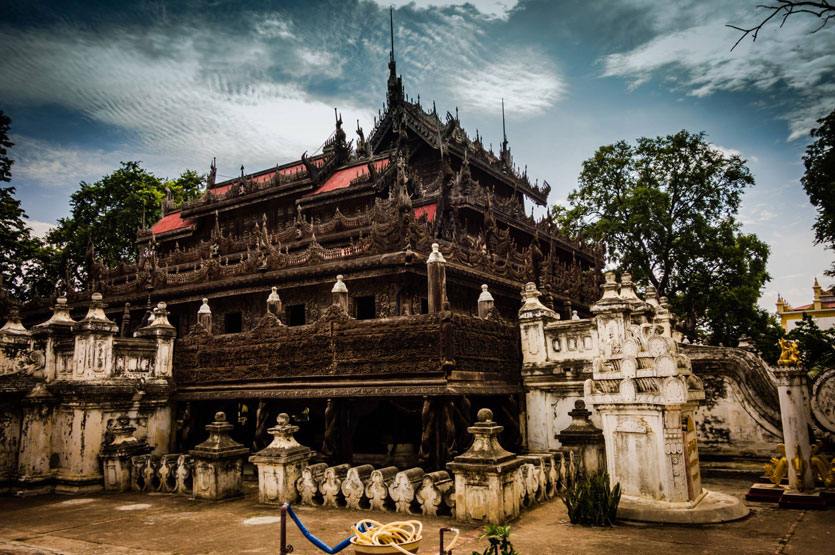