Tourists complain about sexual harassment on all levels

Sexual harassment in any form is unacceptable. Unfortunately in Sri Lanka sexual harassment is on the increase. Locals and tourists alike more often than not have to fight off sexual advances and lewd verbal comments aimed at them. Travelling on public transport can be a hellish experience for women as public transport seems to be a magnet for sexual predators. Touching, exposing one's genitals, commenting, engaging in sexual innuendo, following, pestering can all be perceived as forms of sexual harassment. For those visiting Sri Lanka, these forms of harassment can be overwhelming and is simply not acceptable. Visit any hostel or hotel and one of the most common threads of conversation is harassment experienced at the hands of tuk drivers, bus conductors, passers by and even occasionally tour guides. Complaints to the tourist police often fall on deaf ears and many tourists do not have confidence in the authorities to resolve their complaints of harassment in a timely manner. 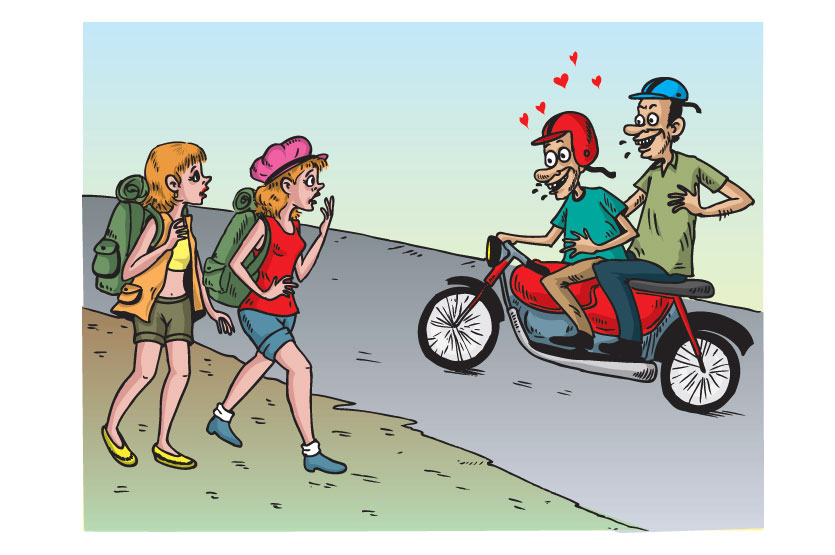 Recently a social media site carried a heartfelt plea from Liz, a visiting tourist who reported that many sites are warning female travellers against visiting Sri Lanka due to the harassment they may face in Sri Lanka.

"Down south you will be harassed every hour of every day from everyone from small boys to old men (not only tuk drivers and beach boys) even if you're fully covered. Tourism is growing fast but so is also this problem. And rumours are spreading internationally. Unfortunately, the government denies it ever happens and are telling travel agents and embassies etc that no tourists have had any problems. Sri Lanka is a beautiful country and female tourists should feel safe and welcome. What can we do?" beseeched Liz in a heartfelt plea.

Her post attracted a raft of comments from locals and tourists alike who all shared their experiences and suggestions as to what the authorities could do. Tourism is on the increase in Sri Lanka with the country being included in many top ten places to visit lists. This growing menace of sexual harassment has to be properly addressed instead of the authorities adopting an ostrich approach and pretending this does not happen. The Tourist Police should act immediately on complaints of harassment and the culprit fined - not a cursory Rs. 1000 fine but much more. There should be a powerful deterrent as a punishment so that these social misfits will never perpetrate such a crime against women ever. How do we resolve this growing menace? Should the education system address this issue or should parents take on more responsibility and teach their sons that it is not acceptable to harass females. For as long as the authorities continue to ignore this problem it will only increase and Sri Lanka will become a pervert's paradise.

"Two of my guests both over 50 years of age were out shopping in Colombo. One of them got out to go to a shop whilst the other lady was waiting in the tuk. The driver turned around and started staring at her and proceeded to lift his sarong and masturbated whilst staring at her in the middle of Galle Road!" - Samantha

"Harassment is rampant, but there are some things you can do. First, know where you are at all times. If you're getting in a tuk or bus, know where you're going. Second, practice 'resting bitch face', I'm serious. Keep a slightly pissed off look on your face and hold your head high. Look fierce and unapproachable. If someone does attempt to talk to you in an unwanted way, look them directly in the face and talk back. They don't expect that. They are used to women scurrying off. Last, never underestimate the power of well timed profanity. That usually sets them running. Basically, exercise common sense that you would exercise any where else in the world. From what I've found after living here for over a decade is that harassment is 99% verbal. Very very rarely will it go further than that. So stand tall and don't give them the fear they expect. Obviously, much more needs to be done in the way of education on that matter. Often the way of dealing with problems in Sri Lanka is to pretend they don't exist!" - Jessica

"Thanks for bringing this up. Sexual harassment is a massive problem in this country not only for tourists but even for us local women. The problem is getting worse by the way. As a women who travels by bus and walks on the streets, I experience some sort of harassment, even verbal, almost every time I go out and have experienced physical harassment numerous times. I personally do not know what can be done to fight the problem as a whole but I have learnt to shout at them loud if they approach me personally. Even my Italian friend was here for one week and she too got harassed within that short time. I agree with you that the tourism factor is going to lose big time if this continues." - Tashii

"A very close relative of mine is a member of a couchsurfing group and this harassment problem is being discussed, feared and experienced no matter your age, marital status or even the way you dress. It is true that many who love Sri Lanka stay away from visiting or cut down their planned stay and travelled to other countries. Why not? There are equally scenic, low cost countries in Asia. True, it happens everywhere but we are a country trying to improve the economic situation, tourism and income for many less educated who depend on tourism related businesses. I really believe that this harassment problem is deep rooted too much in every corner." - Chamini

"We are Sri Lankan and my mother is 75 years old, and in the recent past, a man on a motorbike stopped her and tried to give her his number. Mum said he was easily in his late 20s. She was horrified and quite shaken. Imagine when a 75 year old in a long lungi cannot walk in Nugegoda without being harassed!" - Manuo

"The crux of the problem is that sex education isn't taught in schools and most Sri Lankan parents consider the subject taboo. Naturally these young men and women are thrown into the deep end no sooner they get a smartphone. Their impression of white women is what they see on porn. Then they have this misinformed idea that all foreign women in their country are looking for just one thing. That said, Sri Lankan women are equally subject to harassment. So it's a societal issue. Rural Sri Lanka has a high prevalence of incest. It's a sad situation compounded by a chauvinistic society and an indifferent enforcement apparatus." - Christine

"The problem is repressed sexuality as in all South Asian countries as women are not supposed to have sex before marriage." - Ani

"A few years back, I was in Negombo with my wife and son, visiting friends who own a beach hotel. They went for a walk from the hotel to the shore, while I was enjoying a beer at the bar with my friends. My wife was completely dressed, only shoes off and pants rolled up to half calf. There was a concert going on at the public beach nearby, so there was a large crowd there, and many people swarming around. At some point one bypasser moved towards my wife and touched her breast. My 12 year old son tried to chase the culprit as he ran into the crowd at the concert. My wife ran to me in shock and told me what was happening. I went to take my son out of the crowd before something worse could even happen.This is just one episode which didn't turn dramatic, but the shock for a woman to be harassed this way is really huge. It's really sad to see how they do not understand that it's the best way to drag the international reputation of the country and its population down the loo." - Giuseppe

"Growing up here, I and most of the women I know have experienced groping from a young age (in talking 8/9/10). I had a guy put his hand up my skirt when I was 12 and been groped periodically for the last 15 something years. It's a sad state that women here become somewhat desensitized to it and learn to move on because it's usually blamed on the victim or taken as you being a nuisance if you complain." - Ahn

"No matter a tourist or local, harassment is cruel and illegal. Invading personal space is a criminal offence. That is why people need to raise awareness among others to has situational awareness and some kind of self defense. Look at what Damini Project - Sri Lanka is trying to do. Words are fancy. Action speak louder than words!" - Thithira

"The 'majority' of Sri Lankans have an issue with accepting blame or wrong doing; owning up to issues... they have a "it's that guy's fault" mentality. The South specifically has a culture honed over decades of living off tourists - where rampant abuses occur, mostly unreported. We have to stop it, not the tourists. Let's face up to it and sort it out. And my apologies to those of you have faced such abuse in my country!" - Larry

"This is not limited to foreign women. We do have a problem in Sri Lankan society when it comes to respecting the opposite sex. Old traditions, stone age beliefs and lack of legal solutions encourages this behaviour." - Sanjeewa

"Regrettably - harassment is at all levels of society - women are perceived as 'weak' and 'submissive' - to change this perception is difficult - not impossible - the Sri Lankan male does not like confrontation - especially from a woman - It is time to get tough - stand strong!!!" - Renford

"Initiatives should be taken in schools to educate the younger generation. I don't think it's viable to try and teach fully grown adults to behave after years of insanity where it has become a part of their lifestyle that they cannot differentiate between what's right and wrong. I believe strongly that all local woman should be educated and empowered to fight against this crisis, and after all it's them who raised these men. If someone can make a change, it's the women of this country (the men of this country have lost the plot). So then not today, but the next generation will definitely be well behaved and educated." - Muzakir

"Education has to be started from the grassroot levels in all areas and also the security forces need to be very vigilant because it's the whole country which is losing." - Ahmed

"As I'm riding a bike in Colombo and Weligama, the risk is increased by the guys that dangerously approach me, almost provoking accidents. Once, a tuktuk driver grabbing my bum. In other occasion, I pedaled fast enough to escape a group of more than 10. I'm struggling with harassment on all levels since I stepped into the country. I handle the situation the best I can but it is not something that we just have to cope with!" - Fernanda

"I'm a Sri Lankan living in a popular tourist destination in Spain. In my restaurant, I have met 2 Scandinavian girls who have been raped in Sri Lanka and did not ever want to go back there again and worse is that they inform everyone against travelling there. Also met at least 10 others who have complained of sexual harassment in Sri Lanka. This is true and the authorities have to make new laws to protect foreigners as well as locals with strict law enforcement." - Fayaz