Daniel O’Donnell and Mary Duff: Music from the heart and soul

Irish musicians Daniel O’Donnell and Mary Duff are back in Sri Lanka to perform at the BMICH today. DK Promotions has been instrumental in bringing them to the island the previous times, organizing their return this year as well due to popular demand. “I love it here” Mary intimated excitedly as we sat down for a chat at Hilton Colombo Business Lounge. “It’s gorgeous. And the people are so friendly! You just look and you can see all the smiling faces. As I said before, you don’t see the faces during the concert because it's dark, but you can see the white teeth gleaming and that’s so lovely. I always remember that!”. 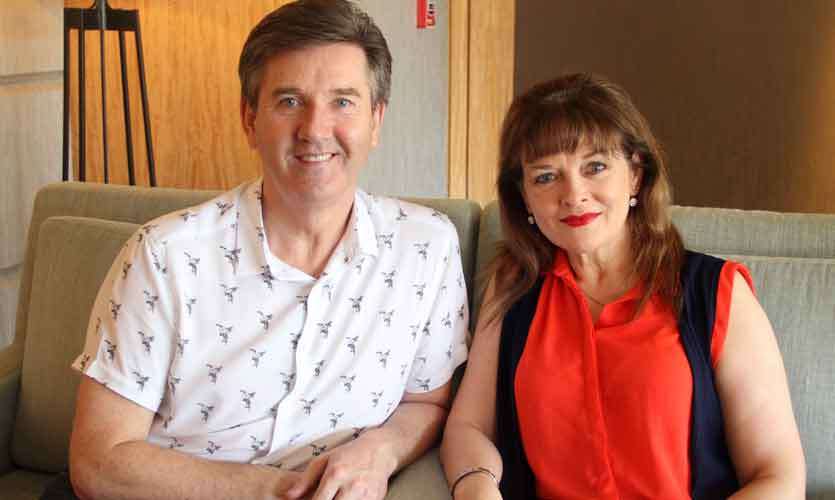 During the tete, a tete, Daniel and Mary shared their experiences of their long working relationship, of creating one's own voice and story in the industry and of course, of their incredible musical journey. We were also treated to an impromptu rendition of ‘My Elusive Dreams’, reminding us they've still got it!

Let's, dive right in, you’ve been performing together for over 25 years.

Daniel: Over 31 now, to be exact. We started doing shows together in 1987. When I started doing concerts, my manager knew Mary and he put her name forward for opening up the show. I suppose it was 94 when we started touring together. Mary often did tours on her own for a year or two -

Daniel: ...and I had other people with me and then Mary came back and we started doing duets as well. I found that we could sing the duets fairly easy together because our vocal ranges worked well together.

Mary: Yes, very different. Very different range. Mine would be very high and Daniel's would be the opposite, so we kind of had to balance it.

Daniel: Exactly. So we’ve done a couple of albums and we enjoy it and people seem to enjoy it.

Speaking of performances, you have been to Sri Lanka before

Mary: I’ve been here on my own as well, though. I did two shows alone.

Reverting back to my first question, 31 years of performing together - I'm sure there are things you love and hate about each other…

Daniel: We don’t really. We get on fairly well. We don’t have any - you know, we’ve been very lucky in that we’ve had good success and I think when something is successful it's easier than if you’re struggling.

Mary: I think we both love what we do as well. And you want it to be good.

Daniel: And you enjoy it. We enjoy the songs and really we have a lot of fun. I always say, it's not important to be perfect. What is important is to be good. That's what we try to do. 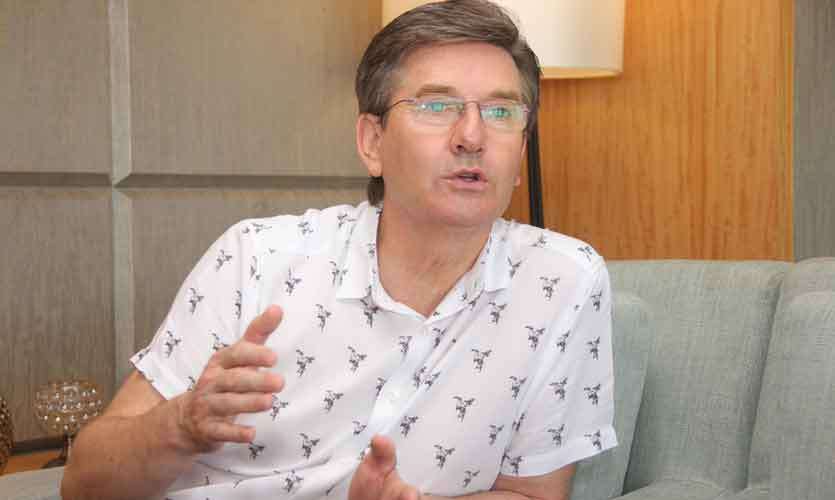 But if you were to pick the best thing about each other,  what would it be?

Daniel: Well I suppose for me Mary is very easy to get on with and the fact that we’re able to sing together and we genuinely enjoy singing together.

Mary: We both really love singing.

Your shows have been very successful with audiences in Sri Lanka. What do you think helps you connect with audience here?

Mary: They just know music. I think first I performed with Gold FM and everybody knew all the songs. The first time I came we were like rock stars.

Daniel: I know, I couldn't believe it!

Mary: Everyone sang along.

Daniel: It was amazing! I suppose we sing a lot of familiar music, you know, we do a lot of the old country. I have a Jim Reeves tribute album and people here seemed to like it a lot. So we included that. These are old songs people would have got to know over the years, so I suppose it's the music, really.

Do you have specific pre-performance rituals before getting on stage?

Daniel: Not really. We do a sound check.

Mary: Just opening up our voices and running the songs, so fewer nerves and we get familiar with the band. It just helps open up our vocal chords. 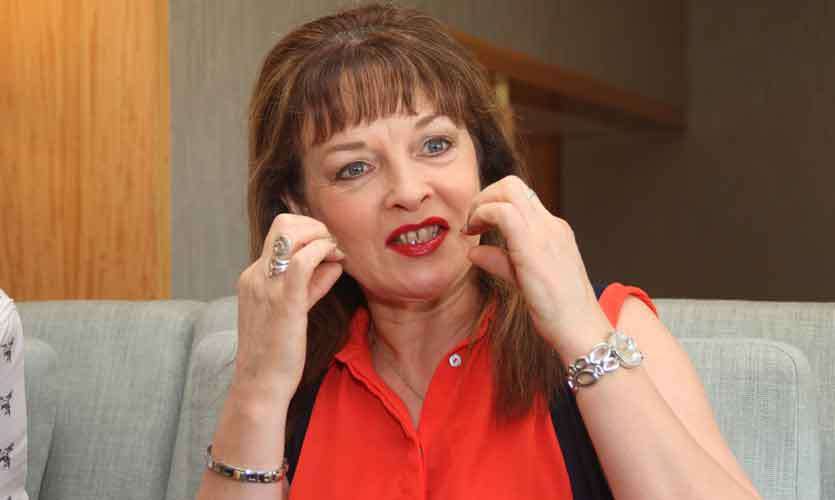 Daniel: We don't really have a ritual of any sort.

Mary: We drink hot water - both of us - which is good for our voices as well.

Daniel: Mary puts honey in hers but I drink it straight!

You have enjoyed longevity in a very unforgiving industry where it's very hard to stay relevant. What would you attribute that to?

Daniel: For me, it's the audience really. It is the audience that have followed what I've done and what Mary has done from the very beginning. Every time we go somewhere, there are people coming for the very first time which is amazing after all these years. I've been singing for 38 years, and doing well and having good crowds. When we came here first, we were amazed that there were so many people here that were so aware of us!

Mary: And a very different audience than we’re used to. Totally different.

Daniel: We wouldn't have believed that in Sri Lanka there would be people who knew all the songs and even knew more of the songs than we would ever sing, because we can’t sing everything. It's amazing. 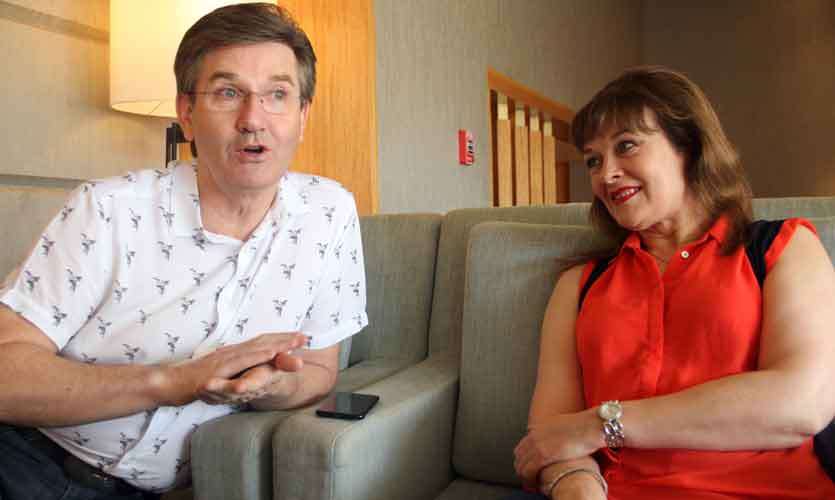 In all your years of performing together, is there a performance or concert that stands out for any reason?

Daniel: Well certainly the first time we came here stood out and absolutely blew us away. And we talk about that - just the people and the atmosphere.

Mary: We used to always brag that the Irish audience is nice and warm and everything, but the audience here is actually better if you can say that!

You both have your roots in country music, although you have tackled other genres. Would you consider trying one out of your comfort zone?

Mary: We’re known for country, but we both sing a variety of other styles as well. I’ve done inspirational type music, which is all hymns, religious type music and I've done a couple of folk songs - and Daniel has, as well. So we have never been strictly country.

Daniel: I've done 3 or 4 albums of the 50s and 60s rock n roll, and we did a whole rock n roll tour. A full show where we performed in arenas and we had all the sets -

Mary: Lots of choreography and dancers.

Daniel: As far as doing something outlandish, I have no desire, because I need to do what I love. I would not be fulfilled even if somebody told me tomorrow ‘if you sing this song it will go to number 1 in the charts’. If my heart wasn’t in it, I couldn't do it. I wouldn't want to be known for something that I didn't love.
Mary: And it wouldn't come across because you don’t enjoy it. You have to live every song.

Musically, what inspires you?

Mary: I just love listening to music. I listen to lots of different styles. I have the radio on at all times when I'm at home.

Daniel: I love the old country. Great fan of Cliff Richards too. That's actually how I ended up coming here (to Sri Lanka). He was doing a tour here and he was singing duets off an album, and I had done a duet with him on that album. When he performed that song, he said to the audience, I performed this song with an Irish singer Daniel O’Donnell and they started to cheer. And he said do you know Daniel O’Donnell and they clapped. So the next day he got on the phone and said, you need to come to Sri Lanka, people know who you are.

If you had to nominate the next generation Mary Duff and Daniel O’Donnell, who would you pick?

Daniel: Oh dear, that's very hard. I always think, when I see young singers coming up - what happened to me, in the beginning, was that they said I was going to be the next Ricky Skaggs and the next this and the next that. But you really only are going to be yourself. When I advise singers, I say to them, there’s always room for you, but there’s not room for you if you try to be someone else. There's always a space for you, because you’re unique, and even if you’re better than me, the people who love me will not think you’re as good. Even though technically you might be better.

Mary: It's not just the music. It's the personality as well.

Daniel: There are a lot of young singers in Ireland that are starting to do well. In recent times, Nathan Carter, Derrick Ryan, Lisa McHugh and Cliona Hagan - they would be the four that are most promising. But we have loads and loads of entertainers at home that are terrific.

You're repertoire in music is immense and you have performed an unimaginable number of songs over the years. But is there a song you wish you sang that you haven't already?

Daniel: What song Mary did we wish we sang?  There’s not many songs that we haven’t. I suppose when you hear the big country duets, you know like Tammy and George, or Loretta and Conway...I think the one I would love if it was ours would be ‘My Elusive Dreams’.

You both tour a lot, but when you've got time off, what's life like at home?

Mary: When I'm at home - I've got two cats - and I love cats and I love dogs. I just love them and I talk to them like they’re people. And it's just nice to relax and chill out with them, when they’re seated on your lap and purring away. It just lifts me up when I'm feeling tired.

Daniel: I'm allergic to cats but my grandchildren, they have a cat that we call Candy. And she's just lovely. I hold her but then I have to go wash my hands. But for me I go to see my two grandchildren. That's just the best day you can have. When I'm at home, I like to meet up with people, friends and family you wouldn't see ordinarily. I live in a very rural part of Ireland, so I go and play cards and play bridge with the local people. Everybody here knows everybody.

Mary:  oh and they don't treat you any differently.

Daniel: It's a very normal existence. I play a little golf too - I play golf badly, but I still love it.