On International Women’s Day 2019, London’s historic Central Saint Martins, University of Arts, along with Colombo 7 Gin, launched the monograph ‘Anoma’. Anoma Wijewardene, who is one of the university’s few alumni in the South Asian region, also lectured at the great college. The monograph was written, designed and produced by writers, academics, editors and art directors from New Delhi, Colombo and London. It affords a comprehensive exploration of the art and life of the artist, examining the factors that formed her ideas, thought process and creative development. The monograph showcases fifty years of the artist’s paintings, installations and designs alongside five substantive essays by writers from Sri Lanka, India and the UK. There are over 250 images of the art, images of the artist’s life and work and a comprehensive section on process and chronology. 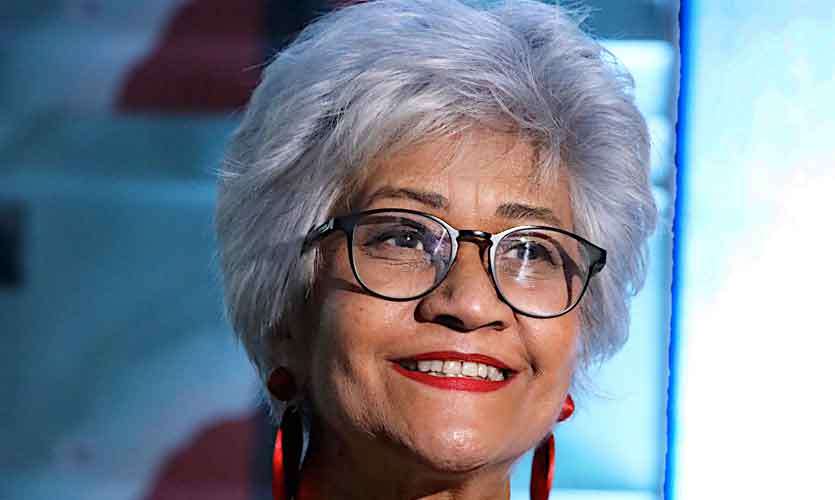 The CEO of Colombo No. 7 Gin—sponsors of the book—Amal De Silva Wijeyeratne summed up the significance of partnering this monograph, saying

“...in their never ending quest for excellence they create for us, things that make this world and bit more beautiful and special and inspire us … along the way; when we find those rare few, we should cherish and celebrate them.”

The launch gathered an eclectic audience of some of London’s leading art academics, gallerists, designers, creative consultancies, family and friends who came from Europe and across the Atlantic from the USA. Following several speeches by London’s creative elite, Anoma Wijewardene spoke briefly of her journey and thanked the many along the way who had made this moment possible. The monograph ‘Anoma’ is now available in London at the exquisite cult store ‘Egg’ in Belgravia. 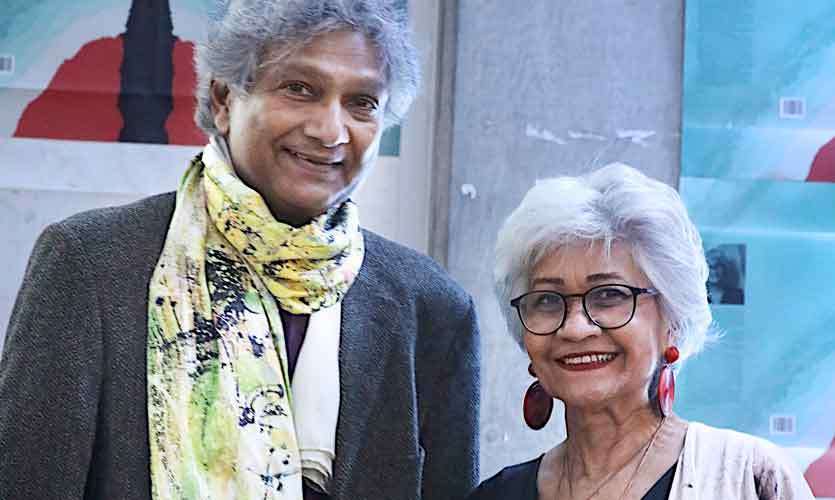 Professor Emerita Jane Rapley OBE—former Head of College at Central Saint Martins (CSM) and Pro Vice Chancellor of the University of Arts London (UAL) who spoke tracked Anoma’s growth from a ‘wild child’ during her university years, through being a prolific and successful designer to becoming the artist we know, painting her thoughts on the profound issues of sustainability and diversity facing the world today. Chris Sanderson, co-founder of UK’s leading trend forecasting and consumer insight consultancy ‘The Future Laboratory’ also spoke, and focused on Anoma's formidable energy and force as a painter and a person, noting how her art sits at a “fulcrum between abstract emotional engagement and political awareness”. Also speaking was Anoma’s lead London gallerist Jana Manuelpillai of The Noble Sage Art Collection. 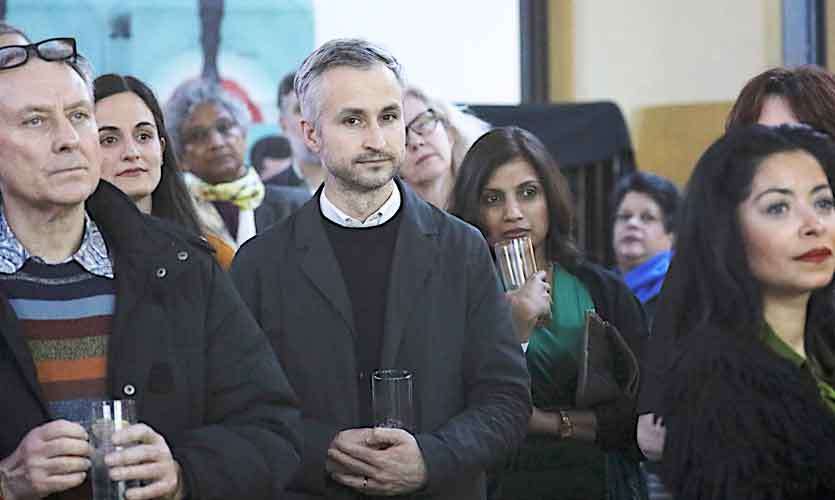 As Jane Rapley shared the monograph being launched at Central Saint Martins completed the “full circle of Anoma’s journey in art, which started at CSM”. The college, established in 1869, is part of the University of the Arts London that is the largest provider of creative education in Europe. CSM has been called the Oxbridge of Art and Design and it’s successful alumni range across many disciplines from artists Anthony Gormley, Richard Long; fashion designers Alexander McQueen and Stella McCartney; actors Michael Fassbender, Pierce Brosnan and Gwendoline Christie; singers M.I.A and Paul Simonson, industrialist Sir James Dyson; Sri Lankan politician Mangala Samaraweera, and of course, Anoma herself.

The eminent group of writers behind ‘Anoma’ monograph include Professor Emeritus Gananath Obeyesekere—emeritus professor of Anthropology—Princeton University, USA; Professor Emerita Jane Rapley OBE, who contributed the longest essay, has undertaken education and business development consultancy work in UK, China, Sri Lanka, Hong Kong, Italy and UK since retiring. The New Delhi based art writer and former editor-in-chief of Blouin Artinfo India, Rosalyn D’Mello has also written an essay. D’Mello is a regular contributor to Art Review and Art Review Asia. An essay from Jana Manuelpillai completes the monograph. Manuelpillai who promoted contemporary South Asian Art is lead art dealer and gallerist for Anoma since 2007, drawing in new audiences to her work. The Sri Lankan writer Richard Simon is the editor. 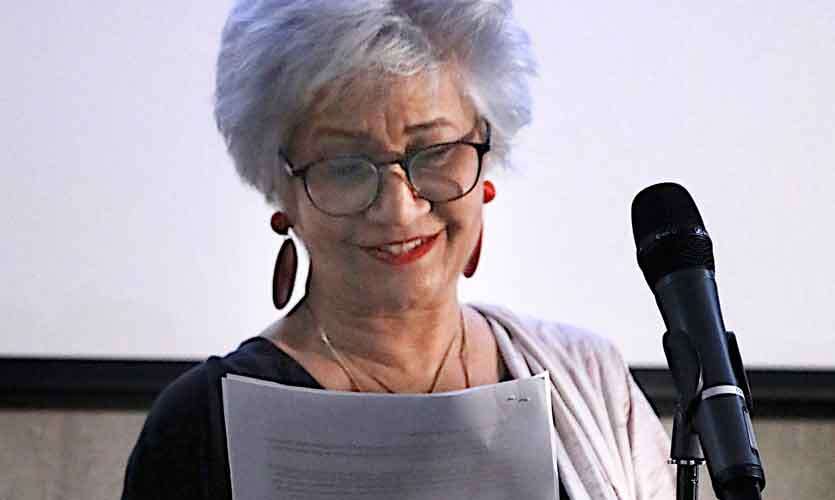 Designed in London by the art direction and design studio Micha Weidmann, the book was introduced by them as “a monograph designed to feel relevant for today, and years to come.” The studio stated that it was honoured to have designed the book for Anoma, and looked to simulate her expressive body of work in a structured yet dynamic way. “The larger introduction texts and extracts allow the reader to understand her inspirations and views vividly allowing the reader to connect to her art,” they said. The studio’s creative approach is based on Micha Weidmann’s background in Swiss design and art direction defined through working with brands such as Prada, Tate Modern and Zaha Hadid.

A highlight at the launch was the bespoke cocktail mixed by the world’s most awarded bartender—Ryan Chetiyawardana. The cocktail was based on Colombo No. 7 Gin, and incorporated the artist’s most treasured tastes from her childhood in Sri Lanka, and later life in London, leading to a drink equally complex and flavoursome. This produced a signature concoction with Sri Lankan spices to light fruit flavours from coconut, butterfly pea powder, curry leaf, cinnamon, lemongrass, kalamata and red pickled star fruit. Chetiyawardana has won critical acclaim and recognition as one of the world’s most pioneering bartenders and was rated among London’s top 100 influencers. He named the cocktail ‘Anoma’. Anoma collaborated with Colombo No.7 Gin to host the launch of her monograph in London. For both Anoma and the beverage brand, this was an exciting opportunity to work draw parallels between the process of art making, and that of brewing a bespoke artisanal beverage. 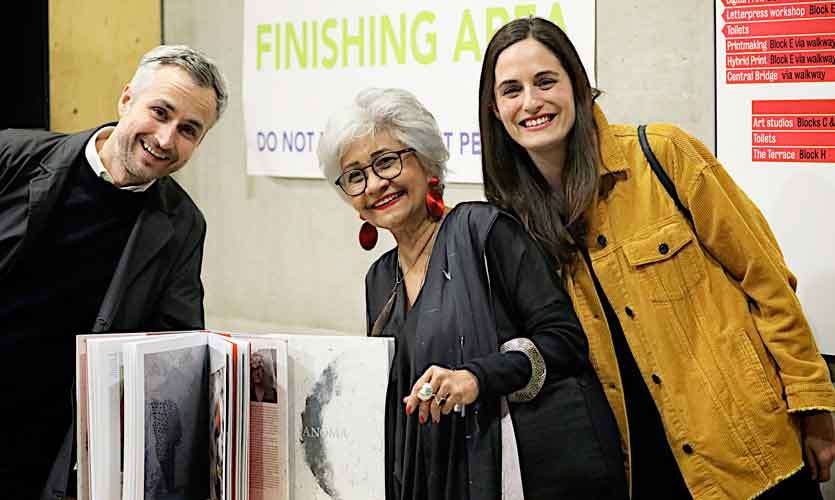 Anoma's art has posed hard questions for her viewers about some of the most compelling and urgent issues of our time - those of sustainability and inclusivity. Her passionate concern for the future of our planet, her love for the environment and her belief that only with tolerance and generosity of spirit will peace be sustained in this world, have fueled the message of her work.   Over this period her art has been exhibited in many international cities (including London, New Delhi, Dubai and Sydney). Several of her mixed media installations were collaborations with poets, writers, composers, performers, activists, and developmental and environmental experts.  After several group and many solo shows, in 2016 she represented South Asia, when her work was included in the ‘One Belt One Road ‘ exhibition at Sotheby’s Hong Kong. 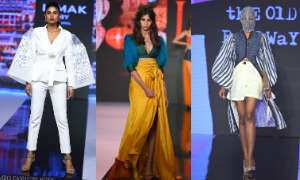