Being held for the 8th consecutive year, The Colombo Theatre festival is a massive theatre experience that showcases the talents of not just the Sri Lankan theatre community but also a number of other theatre communities around the world from countries including Germany, India, Austria, Pakistan, Romania and even the USA.

Mohommed Safeer who is the festival director and the brains behind the gala event says that “It has been a miracle journey throughout these 8 years and this year especially, with the situation  the country experienced we were very unsure that the festival would even be held. But we decided to focus on the silver lining in the dark cloud and worked hard to make this event a success, and ultimately I believe it has been just that.”

And a success it certainly was! Having commenced the festival on the 3rd of August, there is a wide range of activities, workshops, and theatre productions that have been organised at  different venues around Colombo. The productions will also feature many veteran and young actors as well as directors who will be showcasing their talents to all theatre lovers in and out of Sri Lanka.

The 5th of August was one of the days that we chose to go and immerse ourselves in this magical theatre experience. The Elphinstone Theatre Hall was alive with the buzz of excited audience members from all countries who had come to watch the shows performed on the day. 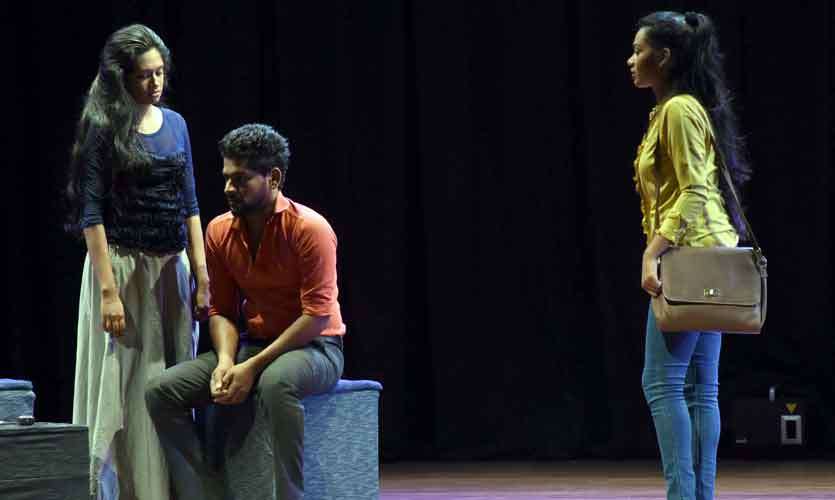 The first play which was supposed to be “Ardakani Honorable Family” performed by an Iranian theatre group was not shown due to the absence of the Iraninan team. However not letting this affect the festival M. Shaffer himself had directed and produced a play named “Kevin” which followed the story of the struggles and obstacles faced by a young Autistic boy called Kevin. The play was an emotional one and some audience members claimed it even moved them to tears.

It also portrayed the difficulties his parents were facing because of the situation that he was in and also the mental trauma that it brought upon Kevin. The play ended with Kevin pleading with his parents to just let him be himself without trying to force him to be something he's not. It  certainly was an interesting and emotional performance.

The second drama “Do Re Mi Fa So La Ti” directed by Sachithra Rahubadda and produced by the Red Apple Theatre Group was also a performance that was very well done. This story revolves around a girl named Melissa who has been entrusted by her Fairy Godmother to introduce music to the world. The Fairy Godmother gifts her  saxophone so that she may identify music and spread it to the world. However Melissa plays the instrument so badly that everyone who listens to it, faints. However this works in her favour when she manages to save the country and King by utilising her terrible skill at playing the saxophone to overpower a band of robbers who try to take over the kingdom. She then proceeds to form a musical band and includes everyone in the kingdom and finally she learns to skilfully play her instrument and introduces music to the world. Imaya Bogoda who played Melissa and Chanduli Gunathilaka who played Melissa's pet Squirrel SQ were definitely noteworthy performances. The choreography was spot on and beautiful to watch. All the group dances they did were magnificent as all the actors executed their movements with precision and the actors worked together with perfect coordination consistently throughout the play.  All in all, a wonderful performance by the team at Red Apple.

The final drama for the day was a Sinhala performance “Nokiya Hitapu Deyak” directed, scripted and choreographed by Nalin Lusena. This play was centered around a newly wed couple that faced problems due to the husband’s infidelity. It focused on an incident that has almost become synonymous with infidelity where the husband sleeps with his office secretary unknown to his wife. However when the wife discovers this and exposes the husband we start to realise the reasons as to why he was forced to be unfaithful in the first place. I particularly liked this play as it didn't simply label a single party for the fault of the infidelity but dug in deeper and revealed it wasn’t just one person but both people in the relationship who were to blame. It portrayed an important lesson to the society and focused on the fact that communication and comprehension are the key to a successful relationship. The words “Nokiya Hitapu Deyak” translates to “What was left unsaid”. The couple had problems because they did not communicate with each other about what they expected from their relationship and they also let external parties cloud their judgement of each other. Furthermore, even at the times they did communicate each party failed to comprehend what the other person was saying which led to even further problems. 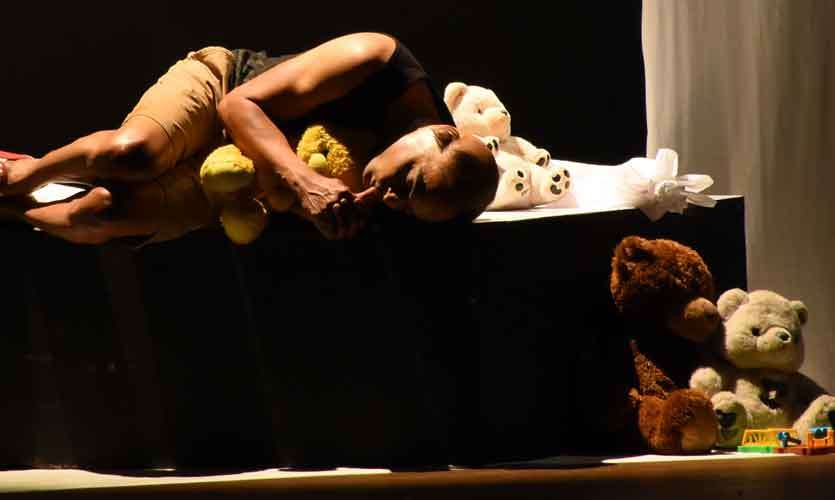 In a short time of just 30 minutes I thought they did a fabulous production and gave us food for thought. The actors Sudarshana Krishantha (husband, Rebeca Dilrukshi (Wife) and Chamanthi Attanayaka (Secretary) certainly did a praiseworthy performance. 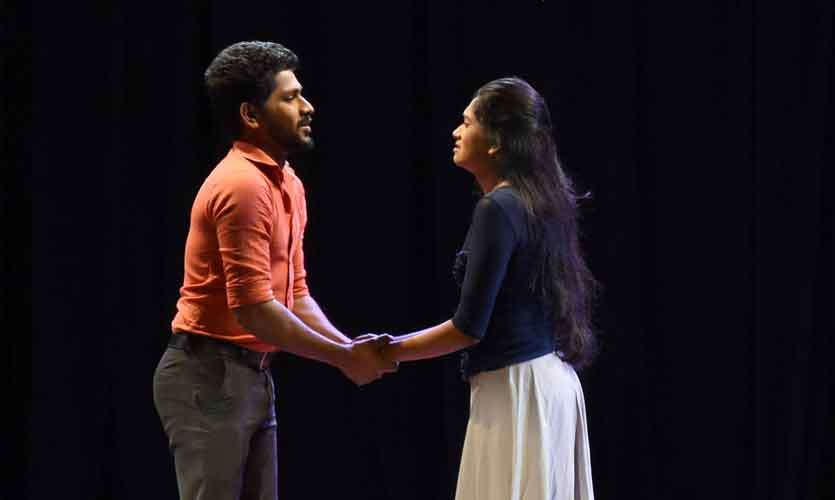 All in all, it was a fantastic evening of theatre and I believe it's a great learning experience for all theatre lovers who wish to go and watch.

There will be performances every evening starting at  6.30 pm till the 9th of August at the Elphinstone Theatre. The festival will feature a number of new original scripts as well as well known productions. Tickets will be available at the Elphinstone theatre, the Goethe Institut and also the CITF office (0758521126) and they are [priced at Rs. 2000/- Rs. 1000/- and Rs. 500/-. 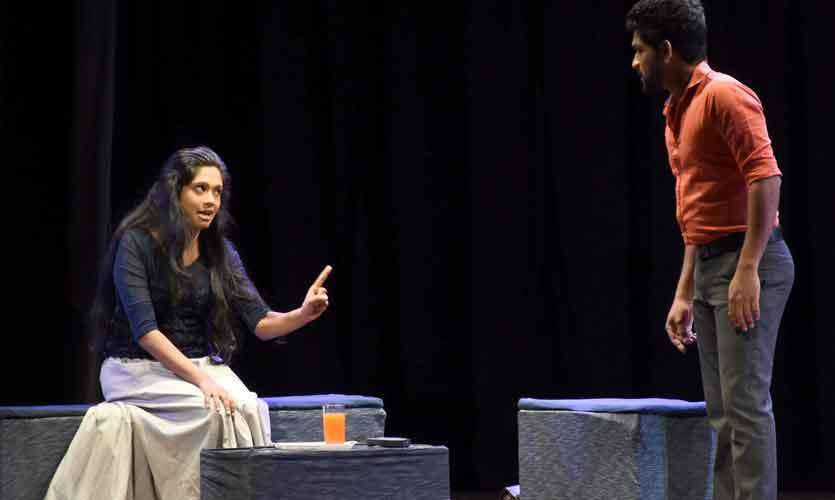 I’m a part of the Town Hall drama and theatre foundation. This festival as a whole has been a huge learning experience for me as a student of drama. We got the opportunity to help out with most of the productions and I learnt so much. I'm truly grateful for this opportunity. 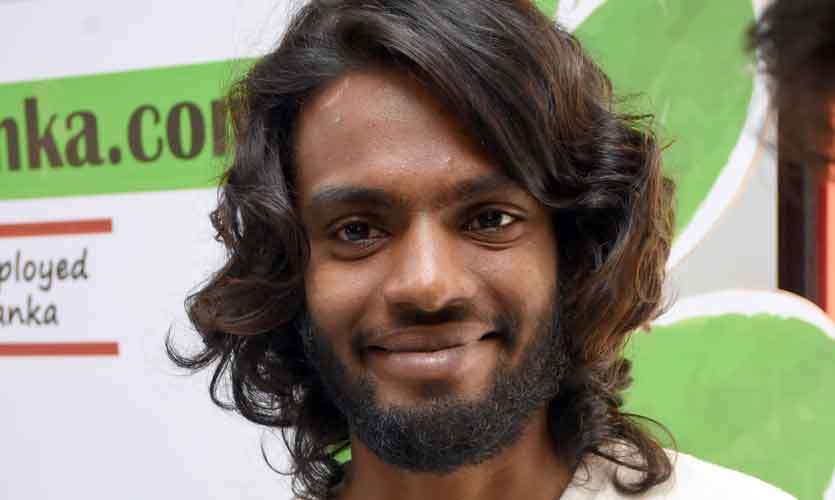 I have been coming to watch the productions at this festival for a couple of years now. Each year has been a different experience and this is definitely a wonderful contribution towards Sri Lankan theatre. 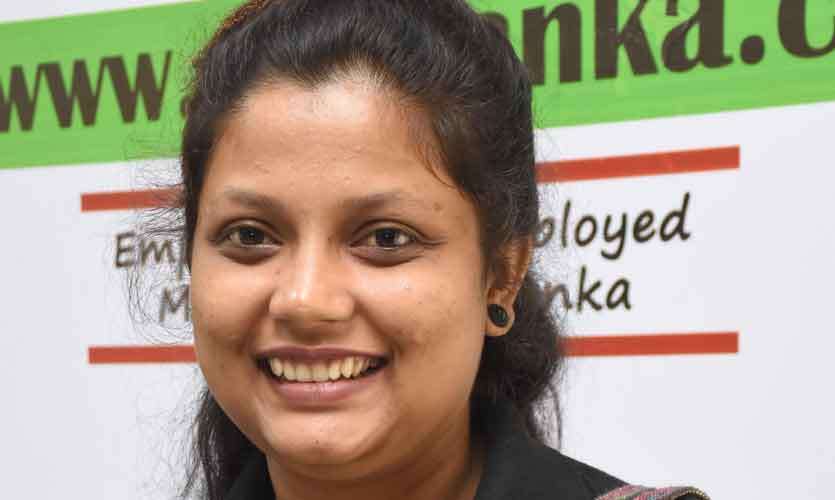 I was quite impressed at the level of the productions that we saw here today. The choreography, the lighting and the direction were all really good. I particularly liked the show “Kevin” and loved the actor who portrayed him. 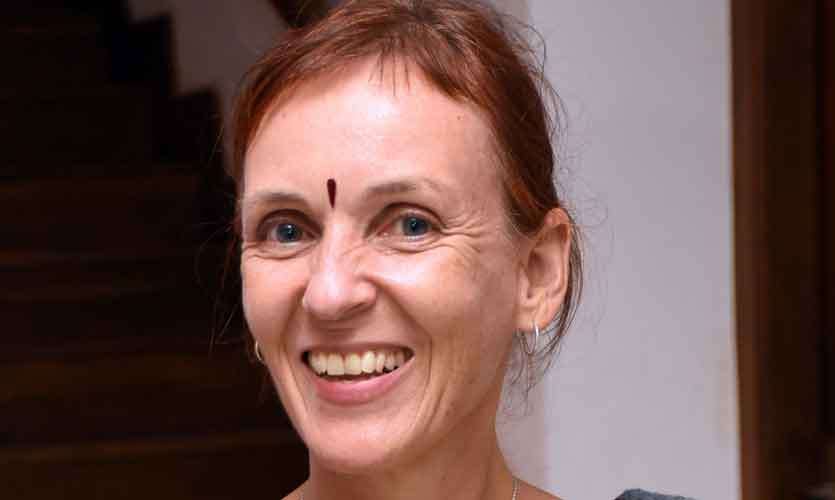 The productions were absolutely fabulous and we enjoyed every minute of it. The acting especially in the first show “Kevin” was absolutely phenomenal. At one point I was even moved to tears. 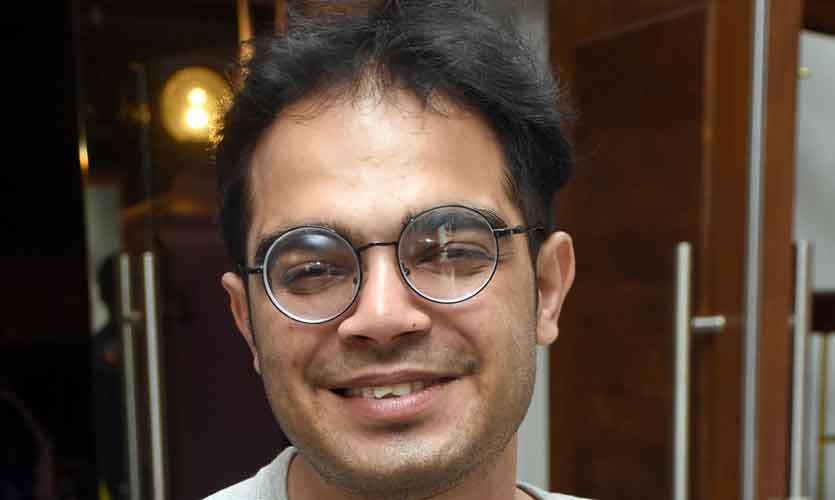 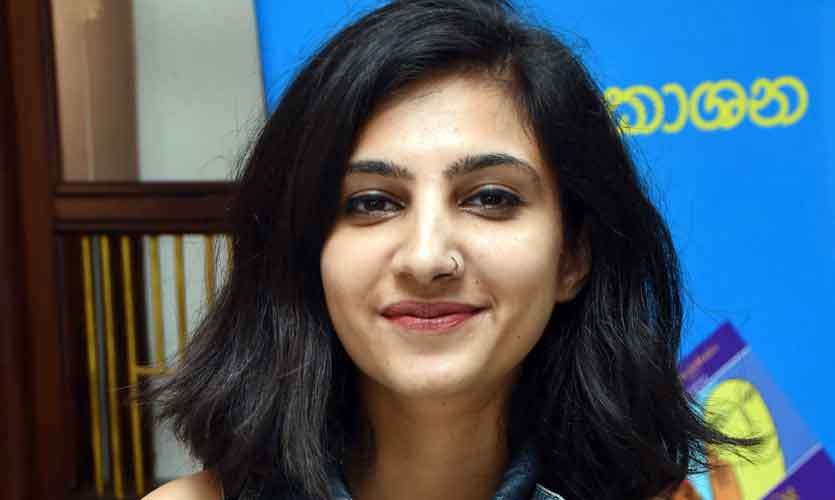 I’m originally from Germany and I found the productions we saw today very interesting. The singers in the show Do Re Mi Fa So La Ti were wonderful and the acting and choreography were very good. 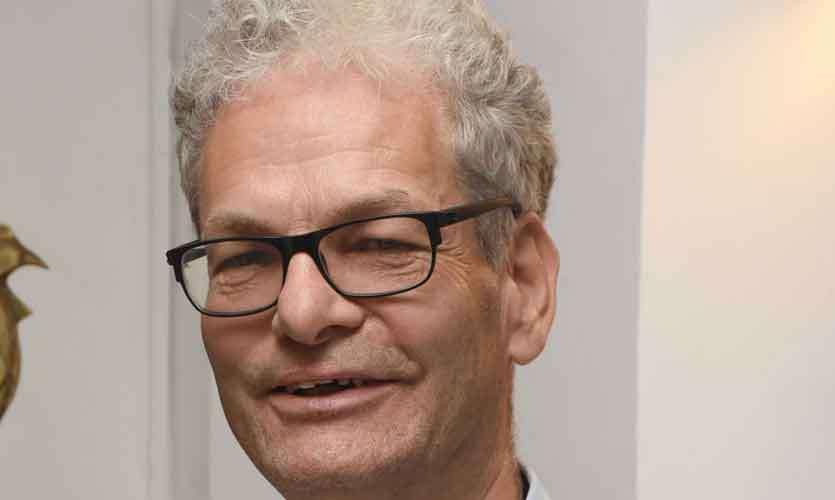 Through M. Safeer’s sole effort he was able to make this festival a success and for that we are truly grateful. There are many local as well as foreign artists that have come here today to showcase their talents here. And I believe that for all Sri Lankans this is not only a learning experience but this is also a moment where we can be proud that our country was able to host a festival on this grand scale. 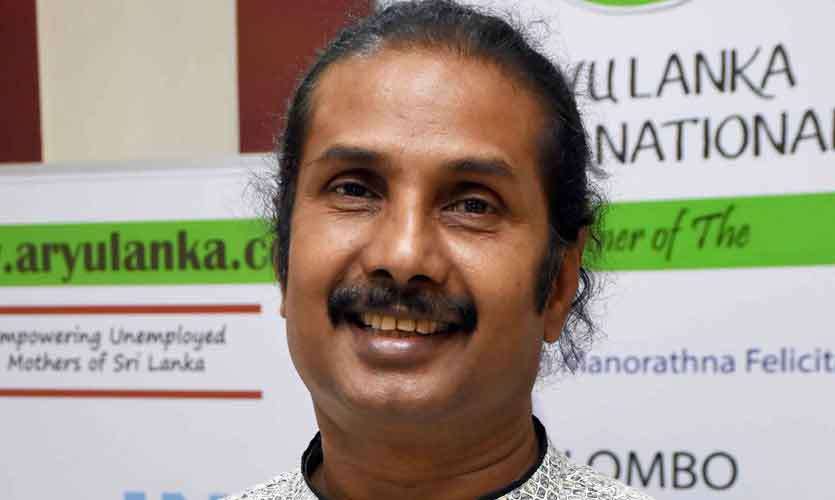 As an American Citizen I’m very happy to come and be a part of this festival here in Sri Lanka. There is so much talent that is being showcased here and I'm also doing my own show as well. Extremely Happy to be a part of this and a big thanks to M. Shafeer for organising this event. 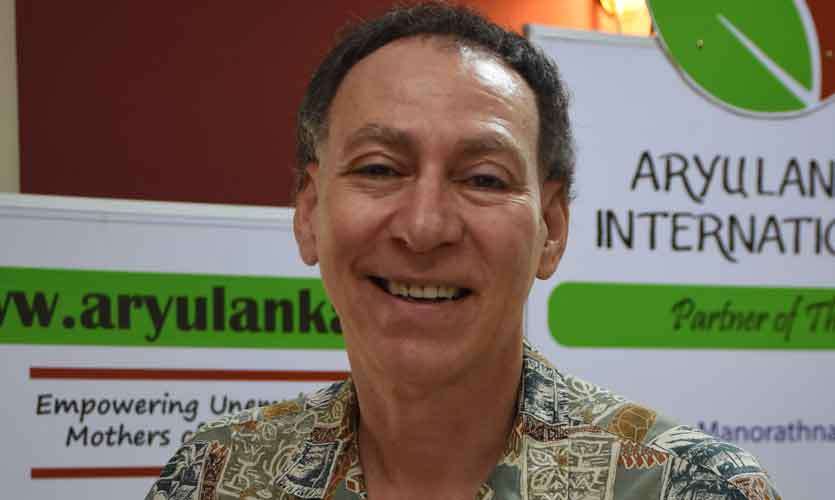