For those of us who are in the animal welfare field, the word Nellikulama brings an involuntary shiver and a cringe of disgust and horror, for that name brings forth to us the memories of hundreds of poor innocent lives captured and tortured till the majority were murdered by the hands of human greed. 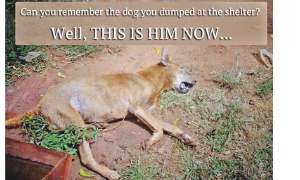 Nellikulama Sunaka Mithuru Sevana (Friendly home for dogs) was the most deceiving name one could give such a place. Hundreds of free-roaming dogs from different areas were captured and simply dumped inside this land, forced to only rely on the scraps of food thrown over the wall from a nearby camp every few weeks to satisfy their hunger, continually breeding because no one took the interest to sterilise nor vaccinate them before dumping them there. Dying of diseases because these authorities in charge did not think about the obvious, that so many dogs together in one land will spread the disease fast. Finally, people only started paying attention to their plight when the neighborhood residents started complaining about the smell of dead dog carcasses, the fights that went on and on into the night, the thousands of ticks that were making their way to the village.

It took a whole army of dedicated volunteers working day in and out sacrificing time money and their sanity to close this down, save whoever the little number they could save. Some of us still have nightmares about the eyes of doggies who we held in our hands in their last moments, while they were begging for their lives, and all that was left for us to do was hold them and comfort them while their suffering finally came to an end with their last breath. 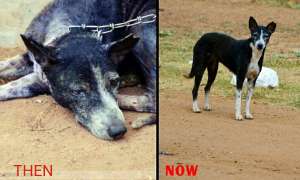 With these memories still fresh in the minds of the animal welfare community, reliable sources state that Department of Animal Production and Health (DAPH), Sri Lanka has set up a dog shelter at Matara Kekanadura government farm with the capacity to house 2000 stray dogs as an initiative to the No-Kill policy. Two similar shelters have been proposed to be built in Galle and Hambantota.
Will these shelters be set up to care for the homeless dogs, or to make them invisible to dog haters, and for the dogs to suffer and die slowly at these so-called shelters? We saw it at Nellukulam back in 2013 which was established by the state where hundreds of street dogs were without proper care or food or water.

Animal Shelter Concept is an outdated concept that has been rejected by the whole world due to its massive failures. When stray dogs from different territories are put together, they tend to be aggressive. The survival of the fittest concept will come in to play. The fittest and the most powerful ones will overpower the weakest resulting in massive and horrific dog fights and painful deaths. Many will starve to death as a result of not being able to compete for food. Diseases like Parvo, distemper of just one dog will result in an epidemic that will kill hundreds.

And are we to really believe a country where any of our governments have failed to feed the humans (mind you these are the ones with a vote) really have the financial ability to maintain a number of shelters that require millions of rupees for food, maintenance, medicine, and cleaning?
Isn’t it better to let the dogs be, they are anyway fed by the community and concentrate on vaccination and sterilisation to reduce the population and safeguard against rabies. Financially isn’t that more effective?

This is simply yet another ruse of some politician or the other.  And yet again the voiceless will pay the price for it with their lives.

Sent by - Alliance for the Protection of Community Dogs APCD