Let’s face it, whether you are from Sri Lanka or in the Bolivian wilderness, guys find it hard to utter this word to the opposite sex. ‘I’m sorry’ doesn’t come easily just like in the case of F R David. The other day, I witnessed a colleague receiving an exquisite bunch of flowers from Shirohana, and I thought, ‘How badly did you mess up?’

Following this, I took to Reddit to ask the Sri Lankan community how guys said these magical words which had me guffawing, it also provided ample fuel in the form of inspiration for this week’s post. Amongst my favourite of ‘Shape, ney?’ there were a few others that couldn’t get any more real. 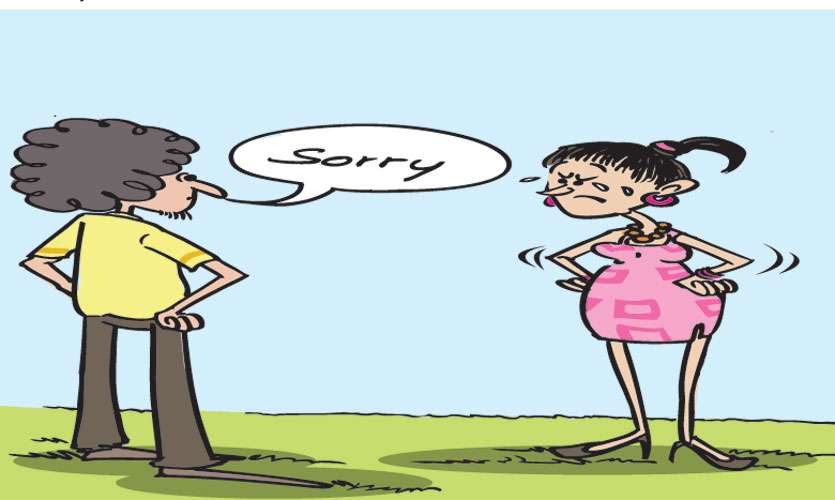 If it’s a trivial matter (for you, not her), you can get away with sending her a few cute posts which you screenshot from Pinterest. This stuff helps if you tell her that you didn’t like her selection of movies, not trashing her first attempt at making a chicken curry. The latter will lead to a beheading.

2. Food to the Rescue

I had a response from someone who said ‘most of the time inviting them for a dinner or lunch out could work’, and Sri Lankan women being who they are, respond readily to the call of food. Hot Drumlets from KFC, giant slices of cake, or hot butter cuttlefish, can bribe your way into her heart. Even though he wouldn't say he is sorry, he knows the effect carbs have on her mood.

If you’ve heard the anecdote that men are like puppies, you’ve heard right. I had someone respond to my question saying that ‘sorry’ can take on non-verbal forms of facial expressions. They can look like they regret telling you that the third dress looks identical to the first one, failing to recognize the Pantone colour palette can seem superficial until she calls you out for ‘not paying attention to her’ leading to ‘you don’t love me like you used to’. It’s amazing how one simple statement can snowball into a full tantrum. It could be genuine or a clever façade, but sources tell me that it works.

Now, here is proof that you can even opt to change your career. This guy knowing full well that he needs to own up for the damage has the vocal ability to turn things around and blame her for the falling out. He has razor-sharp debating skills that he honed while representing his alma mater and can flip the coin so that you wonder if you’re actually guilty. Being in my (early) 30s has taught me that an empty vessel makes the loudest sound, so when they feign innocence and justify their moves, I wonder how deep a manicured nail could penetrate into his flesh.

He silences her with the power of flora. Wild fantasies of roses, special deliveries from Kapruka, Teddy-bears, and Ferro Rocher bouquets are delivered to the office and in the rush of ‘ooh's and ‘aaah’s all is forgiven. Smart? Yes. Economical? No, because “I don’t want this ten thousand rupee bouquet of flowers” said no one ever.

He, unlike, No. 4 will brush it off with a casual ‘Don’t even fret these things’ insouciance that your anger trebles into wrath and off-roads the argument into how careless he is about things that hurt her. Now with him pushing the point of conversation off the window makes you want to push him to a train. His clever strategy is to make you look like you’re making far too much fuss over something all because ‘sorry’ is too hard to say.

Then there’s the one who strays from the rules and apologises. It could be the wisdom he has amassed by being in similar situations before, but he just says it because

a) He knows that will lessen the damage

b) Quieten her down for few hours at least

c) Can get ‘favours’ later. Maybe this Sri Lankan guy knows that he can resort to any of the above, but decides against it.

Statistics have always shown that men speak fewer words than women, however, if I were to suggest that they add just one into their vocabulary that could save them from sticky situations, ‘sorry’ would be one.